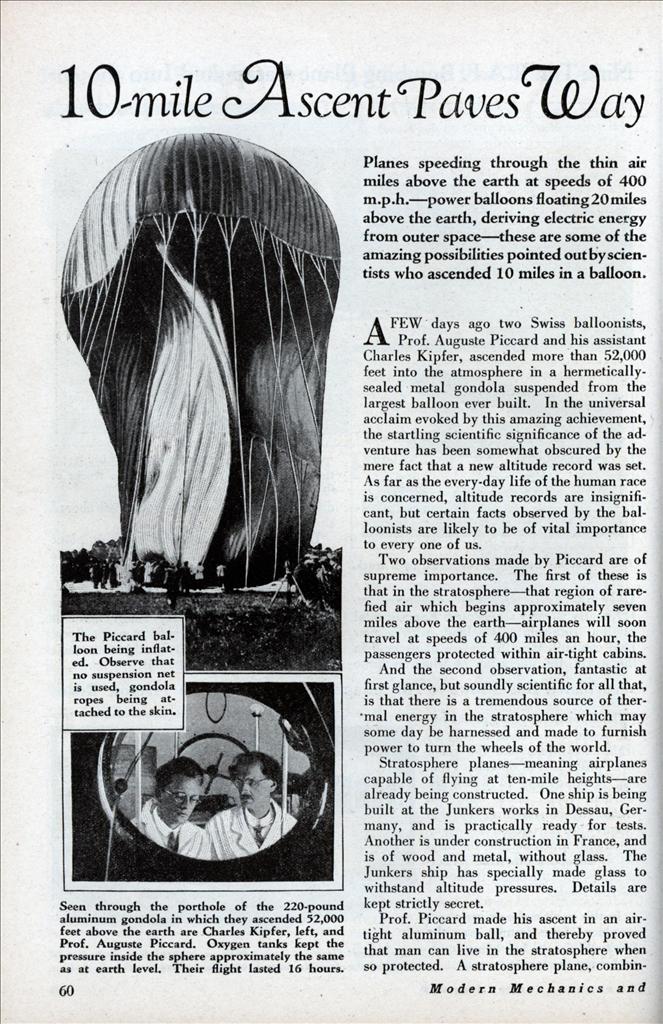 Planes speeding through the thin air miles above the earth at speeds of 400 m.p.h.—power balloons floating20miles above the earth, deriving electric energy from outer space—these are some of the amazing possibilities pointed out by scientists who ascended 10 miles in a balloon.

A FEW days ago two Swiss balloonists, Prof. Auguste Piccard and his assistant Charles Kipfer, ascended more than 52,000 feet into the atmosphere in a hermetically-sealed metal gondola suspended from the largest balloon ever built. In the universal acclaim evoked by this amazing achievement, the startling scientific significance of the adventure has been somewhat obscured by the mere fact that a new altitude record was set. As far as the every-day life of the human race is concerned, altitude records are insignificant, but certain facts observed by the balloonists are likely to be of vital importance to every one of us.

Two observations made by Piccard are of supreme importance. The first of these is that in the stratosphere—that region of rarefied air which begins approximately seven miles above the earth—airplanes will soon travel at speeds of 400 miles an hour, the passengers protected within air-tight cabins.

And the second observation, fantastic at first glance, but soundly scientific for all that, is that there is a tremendous source of thermal energy in the stratosphere which may some day be harnessed and made to furnish power to turn the wheels of the world.

Stratosphere planes—meaning airplanes capable of flying at ten-mile heights—are already being constructed. One ship is being built at the Junkers works in Dessau, Germany, and is practically ready for tests. Another is under construction in France, and is of wood and metal, without glass. The Junkers ship has specially made glass to withstand altitude pressures. Details are kept strictly secret.

Prof. Piccard made his ascent in an airtight aluminum ball, and thereby proved that man can live in the stratosphere when so protected. A stratosphere plane, combining features declared necessary by Prof. Piccard, is illustrated on page 63. Specially constructed propellers and supercharged motors to overcome the extreme rarity of the upper air, and sealed cabins within which oxygen is generated for the passengers, are absolute essentials of such a plane.

One difficulty which has always troubled designers is that a stratosphere plane would require a large wing spread and great power to keep it aloft at high altitudes. At lower levels huge wing spreads are impractical because of the resistance of the denser air. To overcome this, a telescoping wing has been suggested which can be extended to a large area in the stratosphere and retracted when traveling near the ground.

High-speed winds of constant velocity are counted on to speed the stratosphere plane. It has always been thought that a wind constantly blowing to the east exists at high levels, created by the earth’s rotation, but Pic-card’s observations indicate that there are different strata of wind at various altitudes and that directions vary. The pilot of the stratosphere airplane will probably be able to climb to levels where he can select the winds which will speed him along his course.

One of Prof. Piccard’s objects was to measure cosmic radiation. Nobody knows exactly what cosmic rays are, nor where they spring from, but it is generally believed that they reach the earth from outer space and that they provide the power which breaks down the atoms of various elements on the earth. If that is true, and the cosmic rays can be trapped and harnessed, the age-old dream of the alchemists would be attained and man could transmute one element into another, or release the stored energy in the atom and use it for power. It has often been pointed out that the energy stored in the atoms of a cup of water would be sufficient, if released, to drive a liner across the Atlantic.

Prof. Piccard claims definitely to have proved that cosmic rays emanate from the stars, and that they are far more powerful in the stratosphere than on the earth. Inside the Piccard balloon gondola the temperature was, at one time during the ascent, 104 degrees above zero Fahrenheit, while the outside temperature was 76 below. The heat developed was attributed to the rays striking the gondola, and the tremendous extremes in temperature offer a source of power which may some day be harnessed for man’s uses.

Although at a 50,000 feet height the rays are not powerful enough to harness for use, Prof. Piccard points out the possibility that at a slightly higher elevation they will be strong enough to provide a new and revolutionary source of power. If man learns to harness this heat and convert it into electricity, the upper atmosphere of the world a century or so hence may be dotted with floating power balloons which will supplant hydroelectric, coal, oil, and other sources of energy.

The flight of the Piccard balloon was unique for several reasons. The gas bag, with a cubic capacity of 500,000 cubic feet of hydrogen, was the largest ever built. Ordinary racing and experimental free balloons range from 40,000 to 60,000, and occasionally 80,000 cubic feet capacity.

At the start the gas bag contained barely 50,000 feet of gas, sufficient to lift the metal ball containing the two aeronauts with their instruments and equipment and the 500 kilograms of lead shot carried as ballast. Expansion of the gas as the bag rose was depended on to gradually fill out the giant bag and keep the lifting force fairly constant. The balloonists’ experience shows how unbearable life would be on this earth if it were not for the insulating layer of air, which absorbs and blocks off much of the sun’s heat by day, and prevents escape of much of the earth’s heat by night.