The original OCR transcript of the first sentence read:
IN Vancouver, Washington, a quavering feminine voice inquired over the telephone if the tourist bureau of a large oil company provided a sex-vice for absolutely any emergency. “Yes,” replied the unsuspecting clerk. 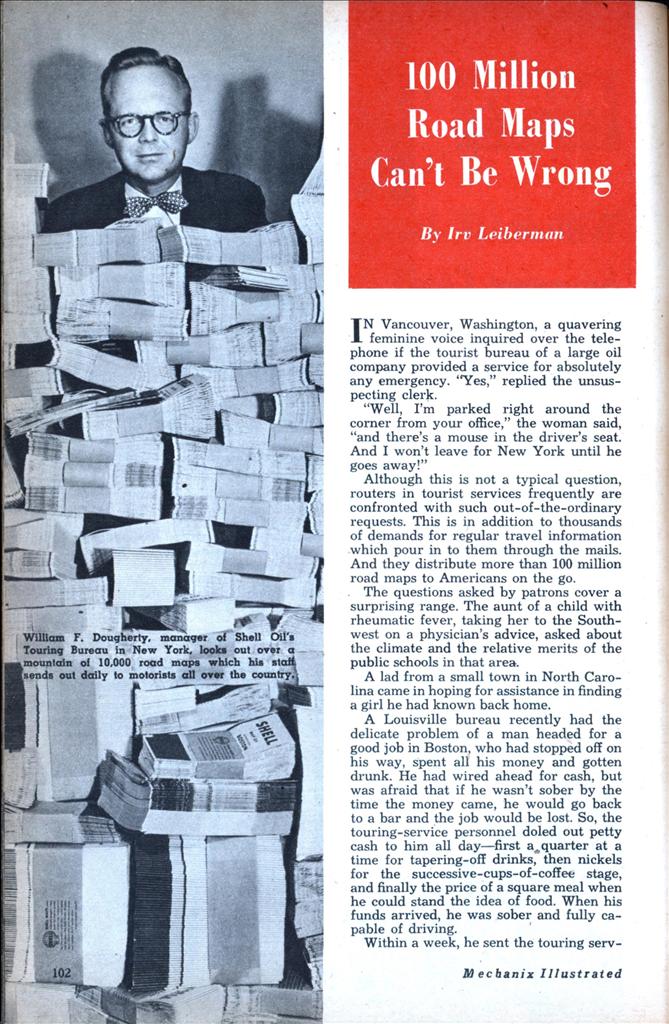 IN Vancouver, Washington, a quavering feminine voice inquired over the telephone if the tourist bureau of a large oil company provided a service for absolutely any emergency. “Yes,” replied the unsuspecting clerk.

“Well, I’m parked right around the corner from your office,” the woman said, “and there’s a mouse in the driver’s seat. And I won’t leave for New York until he goes away!”

Although this is not a typical question, routers in tourist services frequently are confronted with such out-of-the-ordinary requests. This is in addition to thousands of demands for regular travel information which pour in to them through the mails. And they distribute more than 100 million road maps to Americans on the go.

The questions asked by patrons cover a surprising range. The aunt of a child with rheumatic fever, taking her to the Southwest on a physician’s advice, asked about the climate and the relative merits of the public schools in that area.

A lad from a small town in North Carolina came in hoping for assistance in finding a girl he had known back home.

A Louisville bureau recently had the delicate problem of a man headed for a good job in Boston, who had stopped off on his way, spent all his money and gotten drunk. He had wired ahead for cash, but was afraid that if he wasn’t sober by the time the money came, he would go back to a bar and the job would be lost. So, the touring-service personnel doled out petty cash to him all day—first a quarter at a time for tapering-off drinks, then nickels for the successive-cups-of-coffee stage, and finally the price of a square meal when he could stand the idea of food. When his funds arrived, he was sober and fully capable of driving.

Within a week, he sent the touring service attendants a check for the money advanced and a letter of warm thanks.

A few years ago, a man driving from Washington to the West Coast stopped at the capitol’s biggest tourist bureau and asked the clerk to direct him to some Western city where he could find work. He was in bad health and wished to find a climate that would benefit him. The clerk gave him the address of a friend in Los Angeles, provided him with a card of introduction and a map. The man found work through the friend, remained there a year and improved so much that he returned to Washington. Three years have now passed but the clerk still receives friendly little notes from the grateful man.

Most questions are comparatively easy for the travel counselors, but every now and then someone comes up with a tough ‘one. For example, a Columbus, Ohio, father was going through an animal picture book with his young son—making noises like pigs, cows, roosters, dogs and cats. He was even doing pretty well with the trumpeting elephant, the roaring lion and the howling wolf. But finally he was stumped—the camel!

The father, who was a traveling salesman and had frequently received routing assistance from the tourist bureau, took a chance. He called their number.

It just so happened that one member of the staff once had heard a camel make a noise. So she cleared her throat, took several practice croaks, and calmly made like a camel on the telephone.

Here are some topical problems which came up recently at a metropolitan touring service: a clothing salesman wanted a route including every town of 10,000 population from Pennsylvania to Florida; a trailerite asked for a route touching every one of the 48 states; a Congressman on the Military Appropriations Committee requested a 12,000-mile tour covering the nation’s dams; a father who was going to assist his daughter in selecting a future Alma Mater asked for a trip through the college towns of four surrounding states; a teacher of history who was after the realistic touch wanted a motor itinerary following as closely as possible the course of the Old Tremont overland wagon trail.

Training, experience and constant reference to current road data enable the touring-service staffs of the big oil companies to mark most of the requested routes with an ease and speed that often amuses customers, especially since routers do it with the map upside down, facing customer.

While people always seem to go South in the winter and North in the summer, about 15 per cent of all inquiries concern travel to the West. Any unusual regional attraction causes a sudden increase in inquiries—fiestas, fairs, the Mardi Gras, the Kentucky Derby, the races at Indianapolis, dress parades at West Point, the Natchez Spring Pilgrimage are all magnets for the American traveler.

Diplomacy and tact are necessary qualities for an attendant at touring services. After Uncle Sidney has told a motorist about the fine route he used two years ago, it is not easy to persuade him to use another which the routers know is superior in every way. Prodigious patience is re- quired to suggest an outline for a two-week trip for four ladies, when each has a different idea of what she wants to see.

No maps prepared in advance, however, can anticipate all the personal problems involved in taking a trip by car. The travel counselor, for example, is occasionally an unwilling bystander to a family spat, and must steer a wary course to avoid entanglement when Mr. and Mrs. Jones disagree on the way they are going to drive home.

Although most of the patrons are men, routers firmly believe that the women wear the pants when travel plans are decided. If a couple calls, the feminine half usually has the final word.

All types of cars from Model T jalopies to custom-bodied foreign jobs pull up before the doors of the nation’s tourist bureaus. And the procession of human types is just as varied. When a cold snap hit New York last year and reports of frozen motors were common, a mild-mannered traveler worked his way up to a router’s desk and asked for some hot water.

“There’s plenty of water in the washroom,” the girl said, “but I’m not certain where there’s a bucket to carry it out to your car.”

“Oh, that’s all right, Miss,” he grinned. Then, pulling a bottle of milk from his jacket, “I just want to heat the baby’s formula.”

But the most amazing request to hit any touring service arrived by U. S. mail recently. It was a letter from a couple of potential honeymooners.

“We want details on a 2500-mile trip to almost anywhere,” they wrote. “Destination is no object, just as long as you make sure we never get there!”