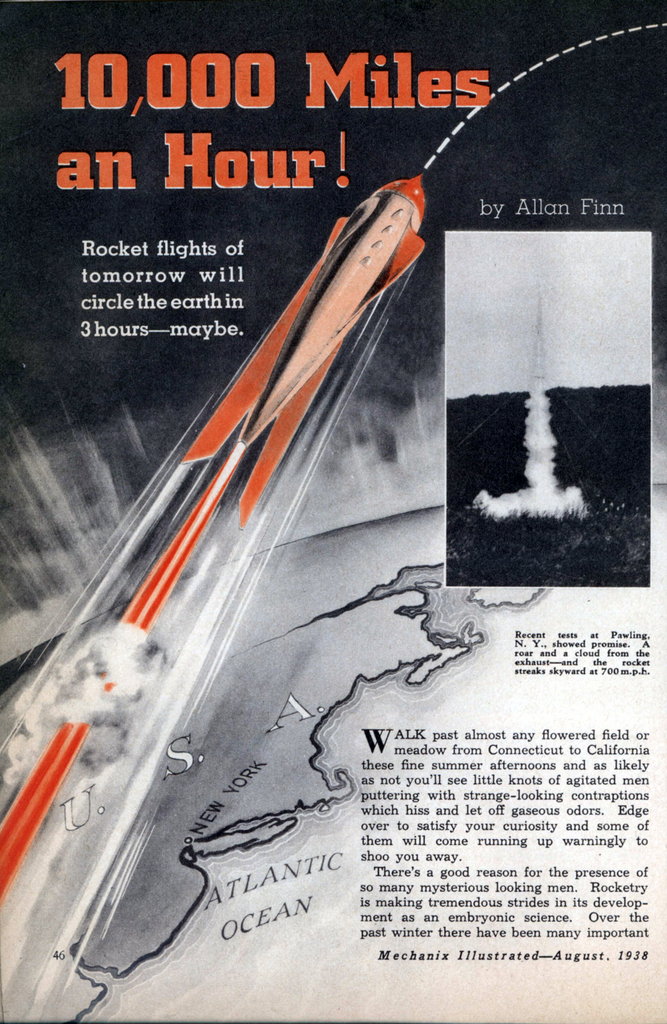 Rocket flights of tomorrow will circle the earth in 3 hoursâ€”maybe.

WALK past almost any flowered field or meadow from Connecticut to California these fine summer afternoons and as likely as not you’ll see little knots of agitated men puttering with strange-looking contraptions which hiss and let off gaseous odors. Edge over to satisfy your curiosity and some of them will come running up warningly to shoo you away.

There’s a good reason for the presence of so many mysterious looking men. Rocketry is making tremendous strides in its development as an embryonic science. Over the past winter there have been many important developments in cellar and garret workshops everywhere. Under the clear skies of July and August tests are being made to ascertain their practical value.

For one thing, a dozen new motorsâ€”combustion chambers with their flame-emitting nozzlesâ€”are undergoing trials. Tests now in progress have definitely passed rocketry from the hobby to the engineering stage. Its rule of thumb days are over, its votaries the aerial giants of tomorrow.

In this transition the two basic problems of the science have been conquered, to-wit: how to use and control explosive and volatile fuels and how to burn them properly to gain the necessary thrust or recoil in take-offs. This procedure is facilitated by the fact that the fuels now usedâ€”oxygen and gasoline mixture or oxygen and alcoholâ€”are not in themselves explosive. They are easy to feed to the combustion chamber, too. Liquid oxygen is automatically forced from its tank into the burning compartment by the pressure of its own evaporation.

Gasoline or alcohol is pressed inside by compressed carbon dioxide or nitrogen. Flow of the intermingling fuels also is controlled by valves.

Moreover, rocket men have developed motors with sufficient thermal efficiencyâ€”about 10 per centâ€”for present experimental shooting requirements. In addition a number of smaller problems relating to dynamics and aerodynamics have been solved or nearly solved.

Armed with these substantial achievements experimenters confidently believe that rocket flights of 25 miles are close at hand, flights of 100 miles around the corner and flights across the Atlantic a definite possibility within our lifetime. More, they believe there is plenty of theoretical basis and some evidence for the conviction that given enough money, power, experimental data, they could shoot their devices to the moon.

Although such flights at present are only in the realm of speculation, rocket ships for them have been designed and the problems of their propulsion and navigation worked out on paper. Ocean-flying rockets would be shaped like a needle, hermetically sealed and steered with gyroscopic fins. Of several compartments, the front of the rocket would be occupied by passengers and crew. Abaft of them would be the fuel tanks, the motor, gyroscope and parachute for descending.

Loaded and ready for a flight, say from Long Island to London, the Atlantic rocket would be assisted in its takeoff by some auxiliary. It might be pushed by a powerful locomotive on a sloping rail, catapulted by a titanic wheel or hurled from a cannon’s maw after the fashion of Jules Verne’s projectile.

Once in the air, the rocket would soar through the stratosphere at an estimated maximum of 10,000 miles an hour, about 2-3/4 miles a second. After describing a parabola at 600 miles, its power would be shut offâ€”by cutting the fuel tanksâ€”and the rocket would coast to its destination. A few miles before landing a parachute released from the rear would check the terrific speed. Thus controlled, the ship would slide to a rest on a wheeled car in a long runway!

Such a flight, it is estimated, would be made in 50 minutes!

Compared with these ambitions actual accomplishments in the air no doubt have been small. Yet they have been no less substantial. Mail, for instance, has been shot over the mountains near Graz in Austria. A live rooster has been catapulted in a rocket over a river in India. There have been rocket glider flights in Germany; test flights of rocket-propelled pilotless planes at Greenwood Lake, N. Y.

Dozens of dry and liquid fuel rockets, of course, have been sent up with varying success. At present the altitude record for a rocket stands at 7,500 feet. It is credited to Dr. Robert H. Goddard, dean of rocket experimenters. He set it at his laboratory near Roswell, New Mexico, in May, 1935. Doctor Goddard’s rocket attained a speed of 700 miles an hour.

Dr. Goddard launches his rockets from a 60-foot rack. The rockets are about 12 feet long, 9 inches in diameter, weigh from 30 to 80 pounds. The actual motor is about 5% inches in diameter and weighs about five pounds. Fueled by gasoline and oxygen, these rockets are steered by a delicate gyroscope whose spinning wheels, affected by any change in direction, control vanes guiding the course of the exhaust flames.

Firing, which Colonel Charles Lindbergh, a rocket enthusiast, has witnessed as Doctor Goddard’s guest, is simple. The fueled rocket is put on the rack and ignited by a fuse set off electrically from a telegraph key. A blast of white flame issues from the nozzle, and with a terrifying swish the rocket slowly rises from the tower. In a flash it is zooming like a thousand hissing vipers in the sky. The rocket undulates from side to side as the gyro continually corrects its skyward course. On one flight. Doctor Goddard reported, the rocket reminded him of a fish swimming in a vertical direction.

Doctor Goddard has developed motors of sufficient strength to resist the effects of constant filing and he believes he has the stabilizer problem licked. Currently, he is working on weight reduction of his rockets.

As recognition of the public’s inquiring mind, the New York World’s Fair has prepared a transportation unit with a hypothetical rocket car.

In Germany it is reported the military scientists there have developed a rocket cannon capable of shooting a thousand miles.

The United States Weather Bureau in Washington has been keenly watching developments. It has agreed when rocket men are ready, to allow them the use of delicate instruments which are now taken aloft for observation by small balloons and airplanes.

Just what is a rocket? Well, a rocket is simply a variation of your own Fourth of July skyrocket, with its hollow tube and pointed cap containing a smaller cylinder of compressed gunpowder. You light its fuse, the flame runs up and ignites the powder which blows off with a hiss through an opening at the base of the tube. It blows off because the burning powder produces gas which expands causing a pressure that forces it out. The reaction thus produced causes the skyrocket to develop a thrust in the opposite direction â€”the thrust being equal to the mass of the ejected gas multiplied by its velocity. This recoil is independent of the surrounding air; it is like the kick of a gun. It operates in accordance with Newton’s third law of motion, i.e., the force acting on the gases to eject them from the rocket has an equal and opposite reaction on the rocket itself.

What are the main stumbling blocks to perfect rocket flights today? First is a motor that will not burn out from the intense heat of combustion. The solution appears to lie in cooling the motor by its own fuels circulating through its walls. Several motors of this type now are being tested. They are called regenerative motors. A most likely design is one by Mr. Wyld, a young Princeton engineer hitherto mentioned. Mr. Wyld’s motor is about 14 inches long and weighs a little more than a pound. It is made of aluminum. The nozzle, where the heat is fiercest in rocketsâ€”sometimes 3,000 degrees F.â€”is very thin nicrom. The fuel flows through a jacket on the outside of the motor. It cools the motor and simultaneously carries the heat back to it. The cooling process fights off heat in the same way water running through metal resists an acetylene torch.

The second problem, now close to solution, involves stabilization of the rocket in flight. Recently tests to this end were completed by experimenters of the American Rocket Society at Pawling, New York. The results of these tests form the working basis of new rocket body designs now being given tryouts. At Pawling, seven different models of rockets conceived by society members were put through the hurdles. All of them wore constructed of balsa wood and cardboard tubing, the work of H. F. Pierce.

Rocket men everywhere are waiting for the results of summer activities. Out of them may emerge a motor and its appurtenances which may take the rocket out of its Kitty Hawk era. If this happens, you can expect to see rockets gathering weather air mass data, carrying messages and mail in war and peace, and soon after short trips with human beings, say from New York to Cleveland or Washington.

For the present we’ll postpone that moon trip, for it is estimated a rocket capable of getting there would have to be as big as the Empire State Building and would cost a paltry $1,000,000,000!