Err, yes they can. 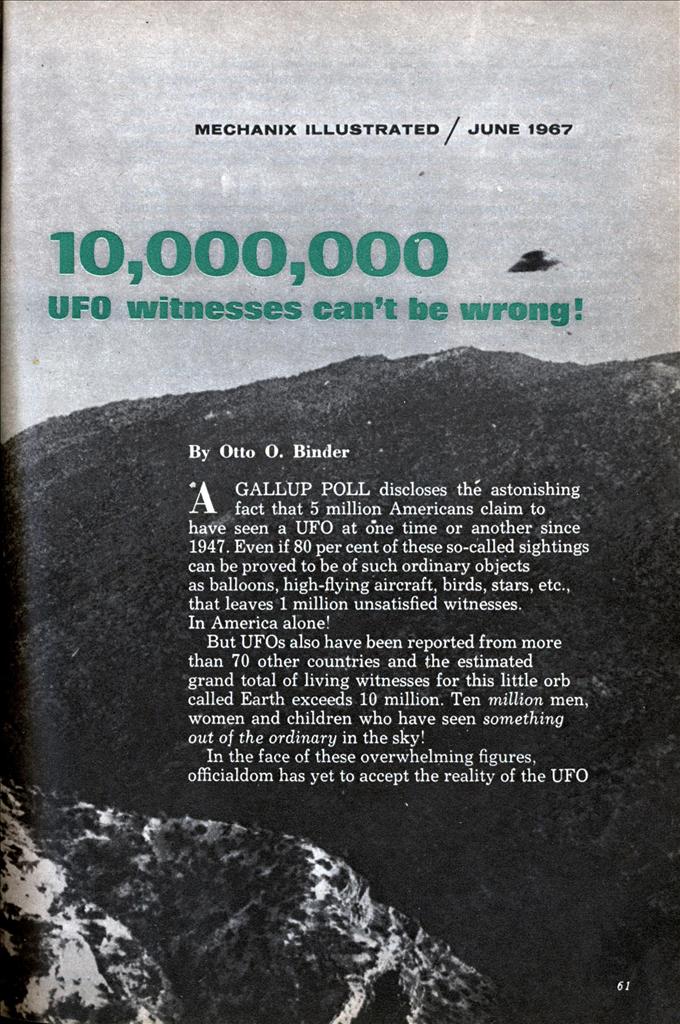 A GALLUP POLL discloses the astonishing fact that 5 million Americans claim to have seen a UFO at one time or another since 1947. Even if 80 per cent of these so-called sightings can be proved to be of such ordinary objects as balloons, high-flying aircraft, birds, stars, etc., that leaves 1 million unsatisfied witnesses. In America alone!

But UFOs also have been reported from more than 70 other countries and the estimated grand total of living witnesses for this little orb called Earth exceeds 10 million. Ten million men, women and children who have seen something out of the ordinary in the sky!

In the face of these overwhelming figures, officialdom has yet to accept the reality of the UFO phenomena, whether they are craft from another planet or not.

It is not the first time that the scientific community or established authority has had its head in the sand. To take one historic example, scientists in the 19th Century scoffed at thousands of reports of stones falling from the sky as the imagination of the uneducated. What scientist today will deny the meteorites seen by the derided witnesses of a century ago? Ironically, these same falling stones often are cited to explain away many of the recent UFO sightings.

Most Americans share the misconception that UFOs are almost exclusively U.S. phenomena. It is now known that nearly every country has had its saucer waves in which for weeks or months large numbers of people have reported sightings.

The American press virtually ignored the French wave of 1954, which was greater than the black-headlined Washington Attack sightings of 1952. Hence, the mere lack of UFO news in your paper does not mean the mystifying things have vanished. On the contrary, a wave of sightings usually is occurring somewhere on this planet at any given moment.

The implications of this enormous body of recorded sightings is staggering.

If we want to be ultra-conservative, suppose, instead of knocking out 80 per cent, we knock out 99.9 per cent of all claimed UFO sightings as attributable to known phenomena, natural or man-made.

That leaves 50,000 unknockable sightings throughout the world over a period of 20 years. Yet the U.S. Air Force, which has investigated more than 11,000 detailed sightings, recognizes only 659 as true unknowns.

It was the late Capt. Edward J. Ruppelt, chief of the USAF’s Project Blue Book (UFO evaluation program) from 1951 to 1953, however, who estimated that 180,000 saucer sightings were made each year in the U.S., of which the USAF received reports on a small fraction. By extrapolation, he believed that the unknowns must be ten times the Air Force figures.

Another factor the Air Force does not give much weight to is that multiple sightings of the same object are sometimes made by dozens, hundreds, or even thousands of people. To give a partial listing of only those sightings witnessed by over 1,000 pairs of eyes: • November 1896 to April 1897—a mystery airship was observed by residents of a dozen states, from California to Illinois. There were an estimated 1 million witnesses.

• July 1952—the Washington Attack, during which 67 UFOs were detected visually or tracked by radar. Seen by perhaps 250,000 in Washington, D.C., and environs.

• August 1965—a fleet of UFOs was seen over seven states from North Dakota down through Oklahoma and Texas by 100,000 witnesses.

• Periodically since 1965, at Wanaque, N.J., UFOs have been observed by police officers, the town mayor, engineers and other professional people, plus an estimated 300,000 other residents of nearby communities. This is considered the greatest flap in UFO history. New Jersey, incidentally, has reported more UFOs than any other state in the union.

Foreign countries have also had their mass sightings:

• September 1954 —thousands of residents of Rome saw a half cigar hanging and maneuvering about a mile above their city for an hour. It was tracked by radar and pursued by jets to no avail.

The UFO Evidence, a listing of hard-core sightings put out by the National Investigations Committee on Aerial Phenomena (a private, nonprofit research organization headed by Maj. Donald E. Keyhoe), includes at least another dozen UFOs photographed, radar-tracked or seen by hundreds of thousands of witnesses.

We are concerned here with the past 20 years only. Sightings actually go back to Biblical times. At least 500 UFOs were reported from the first century B.C. up to 1800, more than 240 from 1800 to 1900. Uncounted thousands of other sightings can be presumed.

In America, the modern UFO era began with Kenneth Arnold’s sighting of June 24,1947. Arnold, a 31-year-old Boise, Idaho, businessman who flew his own plane, was cruising toward Yakima, Wash., when he delayed to join a search for a Marine transport (C-46) down in the Mt. Rainier area. Around 3 p.m. he noticed nine bright, disc-shape objects flying from north to south at an altitude of 9,500 ft. in a stepped-V formation near Mt. Rainier.

Methodically marking his and their positions on a map, Arnold estimated their distance from him at 20 to 25 mi., their length at 45 to 50 ft., and their speed at an incredible—for those days—1,700 mph. The fastest jets of 1947 could do no better than 600 mph.

Upon reaching his destination, Arnold reported his strange experience in detail, offering that the objects “flew like a saucer would if you skipped it across the water”— one of the common denominators in subsequent UFO sightings.

The press, not Arnold, dubbed them flying saucers, a name that has stuck to this day and is applied to UFOs of all shapes. At first, the press ridiculed Arnold. But upon checking his story and the character of the man himself (he boasted a solid reputation as a no-nonsense representative of a fire-control equipment firm), the newsmen had second thoughts. The story spread like wildfire.

Many debunkers tried to attribute what Arnold saw to some sort of illusion or mountain mirage due to an inversion of air but Arnold calmly pointed out that he had seen the nine objects dip behind mountain peaks at times, weaving in and out, something no mirage could do. Well aware that Arnold was a veteran flier familiar with the area and had no ax to grind, the Air Force gave up trying to find a natural explanation for his sighting and it is listed among their 659 unknowns.

There are many other utterly baffling UFO reports that read like science fiction but were made by science-minded people of great reliability.

Perhaps the best substantiated sighting of all was the Bellefontaine, Ohio, incident because it was corroborated three ways.

Place—Near Wright-Patterson AFB, Ohio, where the Air Technical Intelligence Command, which investigates all UFO reports, is headquartered. Thus this unknown was dumped right in the USAF’s backyard.

Sighting—Radarmen at Wright-Patterson AFB picked up and tracked an object moving at 480 mph. At the same time several residents of Bellefontaine saw the object moving high over the airfield. They reported it as round with a metallic gleam.

Ground Command Intercept contacted two airborne F-86 jets, piloted by Maj. James B. Smith and Lt. Donald J. Hemer, which were only 10 mi. from the UFO. Vectored in by radar, they climbed to 30,-000 ft. and soon spotted the round, glowing object.

Both pilots switched on gun cameras and climbed straight toward the UFO at full power, only to find it elusively above them at 40,000 ft., which was their ceiling. Both planes stalled and had to turn down but Maj. Smith nursed his plane back above 40,000 ft. and this time shot several feet of film. He also got an independent fix with his plane’s radar, which determined that the UFO was well beyond the range of any then-known aircraft.

Maj. Smith was just confirming this with his telescopic gun sight when the object accelerated and disappeared at tremendous speed.

ATIC Report—The object, estimated to be between 24 and 40 ft. in diameter, was real because it was sighted both visually and by radarscope. It traveled too fast for any weather balloon and moved against the thermal current. It could not be any known conventional craft. It was not an astronomical body (star, planet or meteor). It could not be a meteorological mirage caused by an air inversion because it was above the weather.

The clincher was Maj. Smith’s film. Though in poor focus, when developed it showed a definite ball of light in the sky.

Human eyes, electronic sensors and photographic film all had verified the UFO that mockingly sailed over the headquarters of Project Blue Book that morning. No explanation has ever been ventured by the Air Force. It has them licked.

And ponder this. If even one sighting is authentic out of all those reported it does not matter how many others are false. •