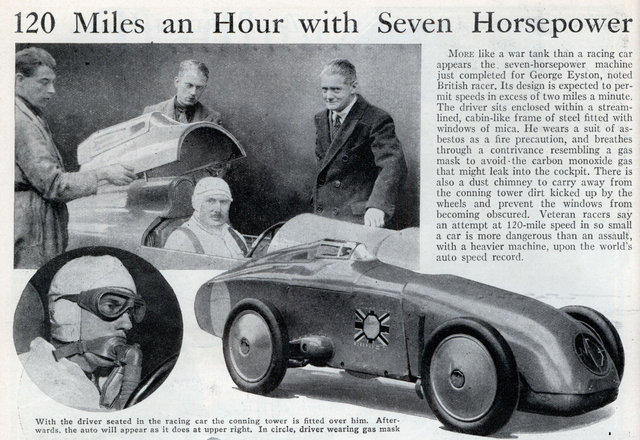 120 Miles an Hour with Seven Horsepower
More like a war tank than a racing car appears the. seven-horsepower machine just completed for George Eyston, noted British racer. Its design is expected to permit speeds in excess of two miles a minute. The driver sits enclosed within a streamlined, cabin-like frame of steel fitted with windows of mica. He wears a suit of asbestos as a fire precaution, and breathes through a contrivance resembling a gas mask to avoid-the carbon monoxide gas that might leak into the cockpit. There is also a dust chimney to carry away from the conning tower dirt kicked up by the wheels and prevent the windows from becoming obscured. Veteran racers say an attempt at 120-mile speed in so small a car is more dangerous than an assault, with a heavier machine, upon the world’s auto speed record.