This is the same camera I posted an article about yesterday (Snap Happy Camera). Apparently a year after it was shown in MI the Army decided to use it in an ad. It looks they used almost the exact same photos. They seem close enough that I’m wondering if the Army ad just painted over the guy’s hand in the originals used in the MI article. 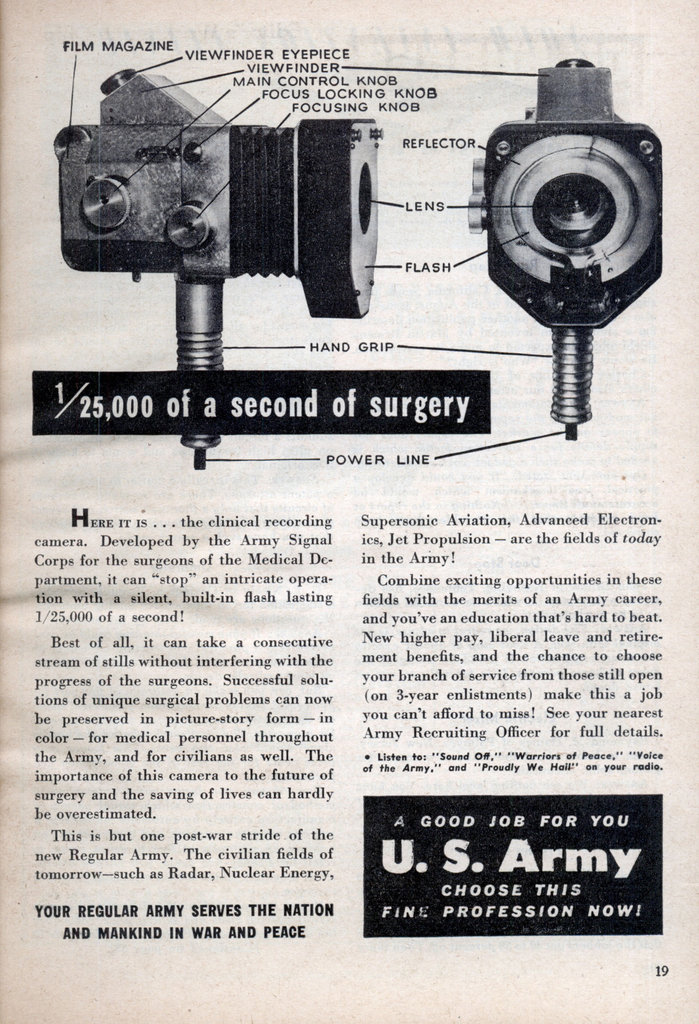 Here it is… the clinical recording camera. Developed by the Army Signal Corps for the surgeons of the Medical Department, it can “stop” an intricate operation with a silent, built-in flash lasting 1/25,000 of a second!

Best of all, it can take a consecutive stream of stills without interfering with the progress of the surgeons. Successful solutions of unique surgical problems can now be preserved in picture-story form — in color — for medical personnel throughout the Army, and for civilians as well. The importance of this camera to the future of surgery and the saving of lives can hardly be overestimated.

This is but one post-war stride of the new Regular Army. The civilian fields of tomorrow—such as Radar, Nuclear Energy, Supersonic Aviation, Advanced Electronics, Jet Propulsion — are the fields of today in the Army!

Combine exciting opportunities in these fields with the merits of an Army career, and you’ve an education that’s hard to beat. New higher pay, liberal leave and retirement benefits, and the chance to choose your branch of service from those still open (on 3-year enlistments) make this a job you can’t afford to miss! See your nearest Army Recruiting Officer for full details.

Listen to: “Sound Off.” “Warriors of Peace.” “Voice of the Army,” and “Proudly We Hail” on your radio.

A GOOD JOB FOR YOU
U.S. Army
CHOOSE THIS FINE PROFESSION NOW!