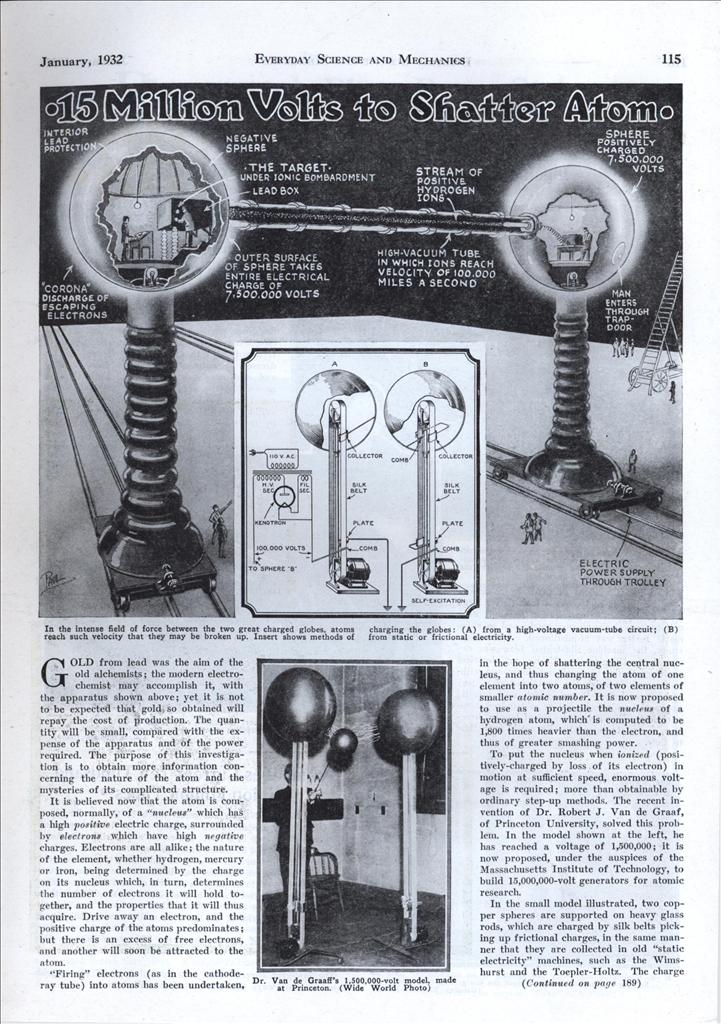 GOLD from lead was the aim of the old alchemists; the modern electro-chemist may accomplish it, with the apparatus shown above; yet it is not to be expected that gold so obtained will repay the cost of production. The quantity will be small, compared with the expense of the apparatus and of the power required. The purpose of this investigation is to obtain more information concerning the nature of the atom and the mysteries of its complicated structure.

It is believed now that the atom is composed, normally, of a “nucleus” which has a high positive electric charge, surrounded by electrons which have high negative charges. Electrons are all alike; the nature of the element, whether hydrogen, mercury or iron, being determined by the charge on its nucleus which, in turn, determines the number of electrons it will hold together, and the properties that it will thus acquire. Drive away an electron, and the positive charge of the atoms predominates; but there is an excess of free electrons, and another will soon be attracted to the atom.

“Firing” electrons (as in the cathode-ray tube) into atoms has been undertaken, in the hope of shattering the central nucleus, and thus changing the atom of one element into two atoms, of two elements of smaller atomic number. It is now proposed to use as a projectile the nucleus of a hydrogen atom, which’ is computed to be 1,800 times heavier than the electron, and thus of greater smashing power.

To put the nucleus when ionized (positively-charged by loss of its electron) in motion at sufficient speed, enormous voltage is required; more than obtainable by ordinary step-up methods. The recent invention of Dr. Robert J. Van de Graaf, of Princeton University, solved this problem. In the model shown at the left, he has reached a voltage of 1,500,000; it is now proposed, under the auspices of the Massachusetts Institute of Technology, to build 15,000,000-volt generators for atomic research.

In the small model illustrated, two copper spheres are supported on heavy glass rods, which are charged by silk belts picking up frictional charges, in the same manner that they are collected in old “static electricity” machines, such as the Wimshurst and the Toepler-Holtz. The charge jumps to the belt in intermittent pulsations; and is carried up into the interior of the sphere, where a “collector” carries it to the metal ball. Since the electric charge is self-repellent, it flies to the outside of the metal sphere. It must be noted that the electricity thus collected is negative; for positive charges do not move in a solid substance. To charge the sphere positively, the negative charges are drawn out of it, by reversing the connections.

A larger supply of electricity, especially in damp weather, may be obtained through a high-voltage vacuum-tube connection, shown at the left in the diagram.

For experiments on atomic disintegration it is proposed to set up two globes so large that physical apparatus and observers may be accommodated in them. The charges, as stated above, will be all on the outer surfaces of the globes. From the positive sphere, positively-charged, “ionized” hydrogen atoms will be released into a tube of stout fiber, in which a high degree of vacuum has been produced. In this way they will travel at rapidly-increasing velocity toward the negatively-charged sphere, which attracts them. With a velocity measured in thousands of miles a second, they will collide with the target at the far end of the tube. Light, X-rays, and radiation more penetrating than X-rays, will be emitted; and probably a number of atoms of the target will be smashed and converted into atoms of lower atomic weight. In this way, gold might be transformed to lead.

It will be necessary for the observers to protect themselves from this bombardment by heavy screens of lead; or perhaps to leave the target sphere entirely during the discharge. The spheres, to avoid interference, will be set up in a great open area where their possible lightning discharges will not be too dangerous.

With less pretentious equipment, the electrical experimenter has a field of opportunity for interesting work along the same line.