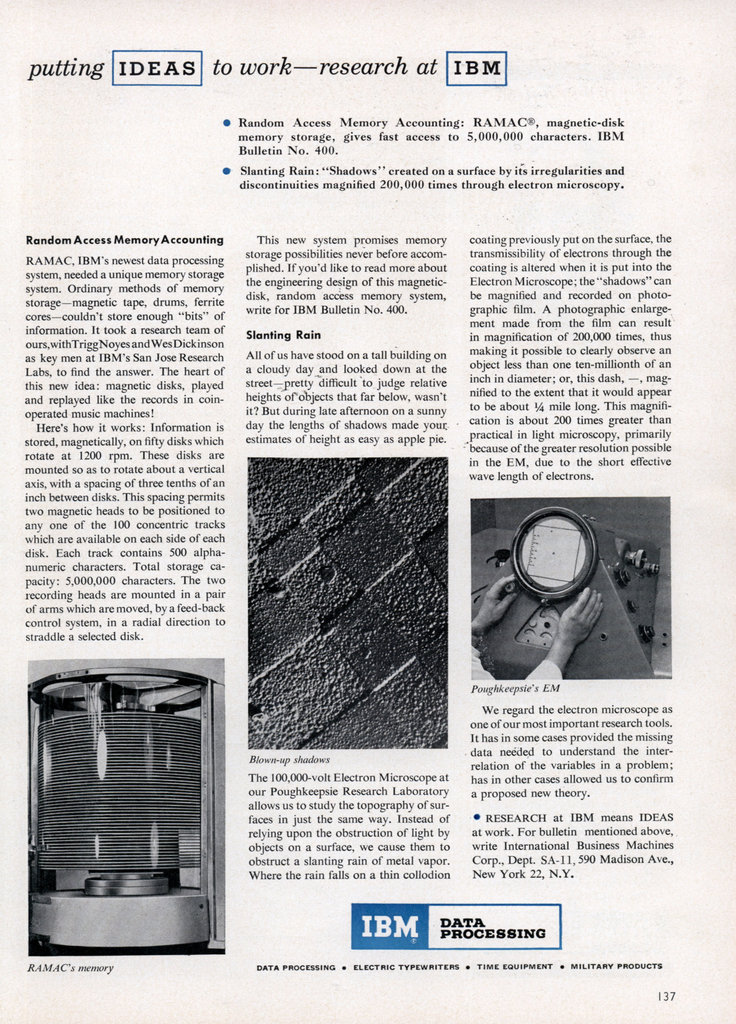 Here’s how it works: Information is stored, magnetically, on fifty disks which rotate at 1200 rpm. These disks are mounted so as to rotate about a vertical
axis, with a spacing of three tenths of an inch between disks. This spacing permits two magnetic heads to be positioned to any one of the 100 concentric tracks which are available on each side of each disk. Each track contains 500 alphanumeric characters. Total storage capacity: 5,000,000 characters. The two recording heads are mounted in a pair of arms which are moved, by a feed-back control system, in a radial direction to straddle a selected disk.

This new system promises memory storage possibilities never before accomplished. If you’d like to read more about the engineering design of this magnetic-disk, random access memory system, write for IBM Bulletin No. 400.

Slanting Rain
All of us have stood on a tall building on a cloudy day and looked down at the streetâ€”pretty difficult to judge relative heights of objects that far below, wasn’t it? But during late afternoon on a sunny day the lengths of shadows made your, estimates of height as easy as apple pie.

The 100,000-volt Electron Microscope at our Poughkeepsie Research Laboratory allows us to study the topography of surfaces in just the same way. Instead of relying upon the obstruction of light by objects on a surface, we cause them to obstruct a slanting rain of metal vapor. Where the rain falls on a thin collodion coating previously put on the surface, the transmissibility of electrons through the coating is altered when it is put into the Electron Microscope; the k4shadows”can be magnified and recorded on photographic film. A photographic enlarge-ment made from the film can result in magnification of 200,000 times, thus making it possible to clearly observe an object less than one ten-millionth of an inch in diameter; or, this dash, â€”, magnified to the extent that it would appear to be about Va mile long. This magnification is about 200 times greater than practical in light microscopy, primarily because of the greater resolution possible in the EM, due to the short effective wave length of electrons.

We regard the electron microscope as one of our most important research tools. It has in some cases provided the missing . data needed to understand the inter-relation of the variables in a problem; has in other cases allowed us to confirm a proposed new theory.