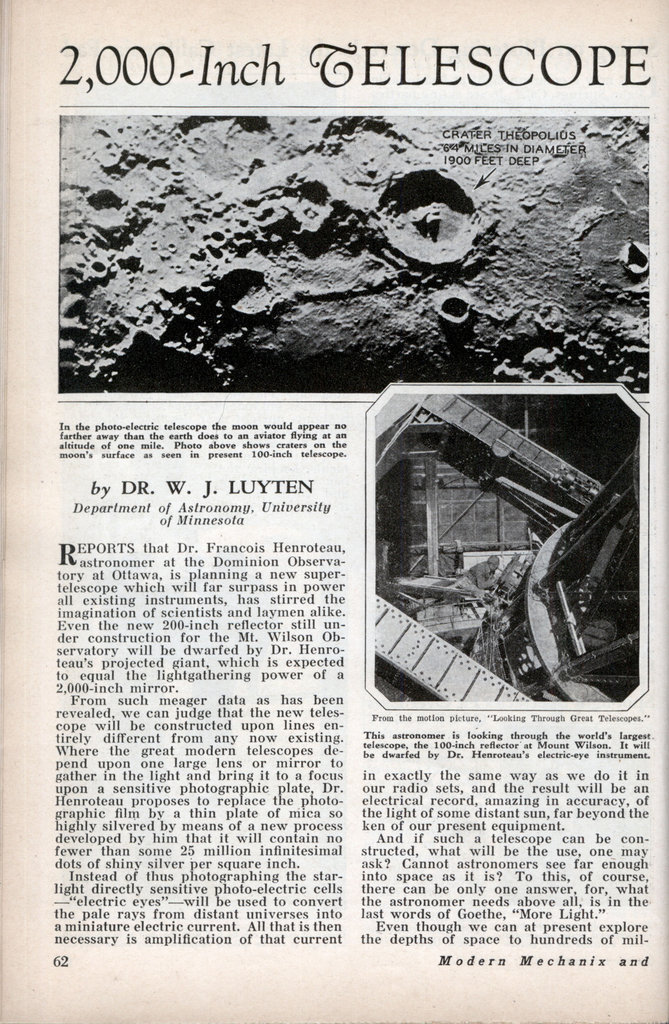 Proposed photo-electric instrument may bring the moon within a mile of the earth, solve the mystery of life on the planets and reveal the gigantic sun that holds the universe together. Here Dr. Luyten tells of discoveries awaiting the great telescope.

REPORTS that Dr. Francois Henroteau, astronomer at the Dominion Observatory at Ottawa, is planning a new super-telescope which will far surpass in power all existing instruments, has stirred the imagination of scientists and laymen alike. Even the new 200-inch reflector still under construction for the Mt. Wilson Observatory will be dwarfed by Dr. Henro-teau’s projected giant, which is expected to equal the lightgathering power of a 2,000-inch mirror.

From such meager data as has been revealed, we can judge that the new telescope will be constructed upon lines entirely different from any now existing. Where the great modern telescopes depend upon one large lens or mirror to gather in the light and bring it to a focus upon a sensitive photographic plate, Dr. Henroteau proposes to replace the photographic film by a thin plate of mica so highly silvered by means of a new process developed by him that it will contain no fewer than some 25 million infinitesimal dots of shiny silver per square inch.

Instead of thus photographing the starlight directly sensitive photo-electric cells â€””electric eyes”â€”will be used to convert the pale rays from distant universes into a miniature electric current. All that is then necessary is amplification of that current in exactly the same way as we do it in our radio sets, and the result will be an electrical record, amazing in accuracy, of the light of some distant sun, far beyond the ken of our present equipment.

And if such a telescope can be constructed, what will be the use, one may ask? Cannot astronomers see far enough into space as it is? To this, of course, there can be only one answer, for, what the astronomer needs above all, is in the last words of Goethe, “More Light.”

Even though we can at present explore the depths of space to hundreds of millions of light years, of six trillion miles eachâ€”-6,000,000,000,000 miles in one light yearâ€”it is not enough, for just beyond lies one of the greatest riddles of Creation. Recent observations, viewed in the light of relativity, have convinced astronomers that our universe is expanding, and that this cosmic inflation acts in such a way that the more distant an object is, the faster it will run away from us.

So fast and furious do the speeds of these thousands of distant galaxies become that finally, at a distance of roughly a billion light years, their speed would become equal to the velocity of light, and in our explorations of space we should thus strike a “blind zone” where we could no longer see anything. As yet our telescopes cannot quite penetrate that far but once we can we shall have reached the “end of the universe” so to speak, although actually, of course, there is no end.

Not only in exploring that outside space, strewn with countless galaxies, could such a telescope be useful, however, nearer home, in our own Milky Way System there are still many things to discover. Shaped roughly like a disc, some 300,000 light years in diameter, and some 30,000 light years thick, and containing probably no less than several billion stars, this Milky Way is still far from an open book to us. For in it float immense obscuring clouds, cutting off the light of everything behind them, and we are like a mariner charting his way on sea in a thick fog.

We know that our sun and its planets are not at the center, we even know fairly certainly that we are tens of thousands of light years away from it, and we know in what direction we must look for that center, but we cannot see it, for it lies deeply hidden in one of the murkiest spots in the heavens. Probably it is a gigantic cloud of stars, containing several hundred millions of suns like our own.

Just how that center is built up, however, we do not know.

With the planets, too, there are still many things to be found out in which such a powerful telescope could help. There is the planet Mars. We do not know the cause of its peculiar orange hue, nor are we certain whether there is vegetation on Mars, nor the temperatures in its arid deserts.

The atmosphere of the earth limits the range of telescopes, no matter what their size. It is impossible to state definitely how close to man an object will be brought by any telescope. Depending on conditions, however, this new telescope may bring the moon from twenty miles to within one mile of the earth. Mars might appear just 200 miles away.