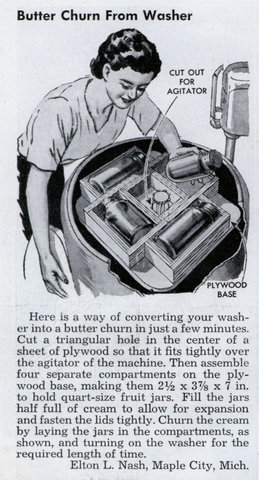 Butter Churn From Washer
Here is a way of converting your washer into a butter churn in just a few minutes. Cut a triangular hole in the center of a sheet of plywood so that it fits tightly over the agitator of the machine. Then assemble four separate compartments on the plywood base, making them 2-1/2 x 3-7/8 x 7 in. to hold quart-size fruit jars. Fill the jars half full of cream to allow for expansion and fasten the lids tightly. Churn the cream by laying the jars in the compartments, as shown, and turning on the washer for the required length of time.
Elton L. Nash, Maple City, Mich. 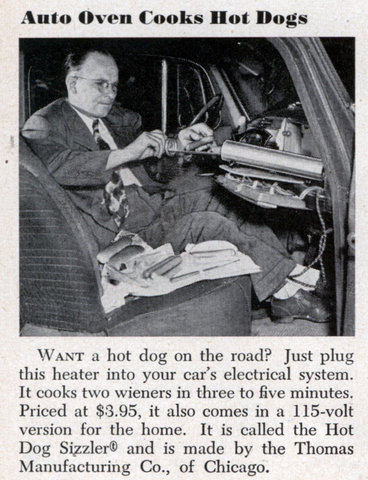 Auto Oven Cooks Hot Dogs
Want a hot dog on the road? Just plug this heater into your car’s electrical system. It cooks two wieners in three to five minutes. Priced at $3.95, it also comes in a 115-volt version for the home. It is called the Hot Dog Sizzler and is made by the Thomas Manufacturing Co., of Chicago. 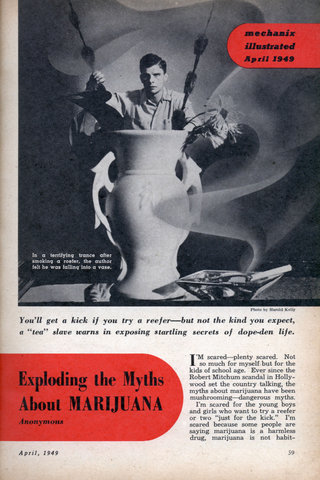 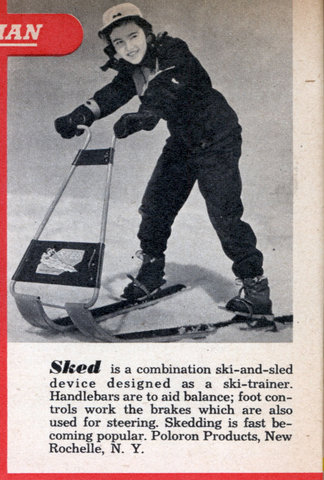 ROTFL!!! I have never seen anything so funny in my life. I mean, it looks like a normal ruler right? But instead of 12 inches, it has 13!!! Hilarious!

And that “everyone can use an extra inch” line is just classic. I’m going to make that my new catch-phrase. 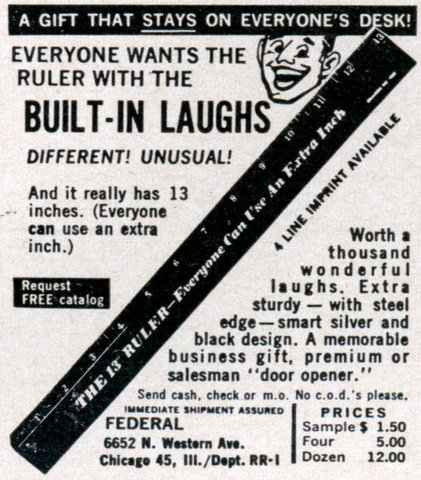 A GIFT THAT STAYS ON EVERYONE’S DESK!
EVERYONE WANTS THE RULER WITH THE BUILT-IN LAUGHS

DIFFERENT! UNUSUAL!
And it really has 13 inches. (Everyone can use an extra inch.)

I’m a big fan of any media you have to peel.

Video pulses are fed through a recording head to a magnetic-foil disk (background above) spun at 3,000 r.p.m. Scanning speed is 2,000 inches a second. A pushbutton starts the cycle for an instantaneous single picture.

A playback feeds the stills to another TV set. Up to 10 can be recorded on one foil, which can be peeled off for filing.

This would be a pretty amazing show. Though with today’s gas prices, it would be a very expensive one. 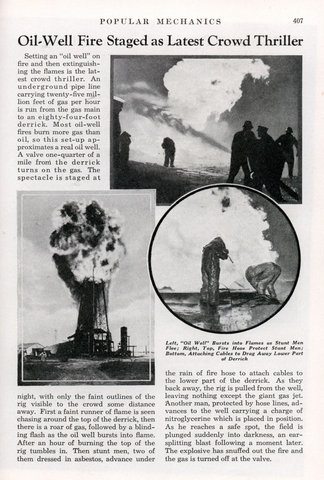 Setting an “oil well” on fire and then extinguishing the flames is the latest crowd thriller. An underground pipe line carrying twenty-five million feet of gas per hour is run from the gas main to an eighty-four-foot derrick. Most oil-well fires burn more gas than oil, so this set-up approximates a real oil well. A valve one-quarter of a mile from the derrick turns on the gas. The spectacle is staged at night, with only the faint outlines of the rig visible to the crowd some distance away. First a faint runner of flame is seen chasing around the top of the derrick, then there is a roar of gas, followed by a blinding flash as the oil well bursts into flame.

Check out the cover for a better view of the finished car. 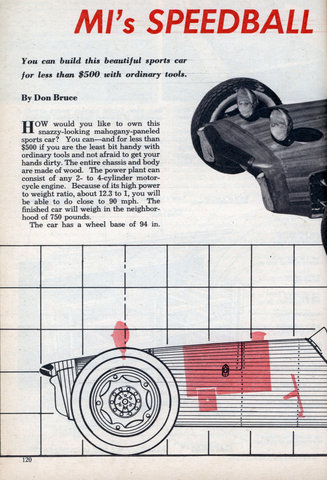 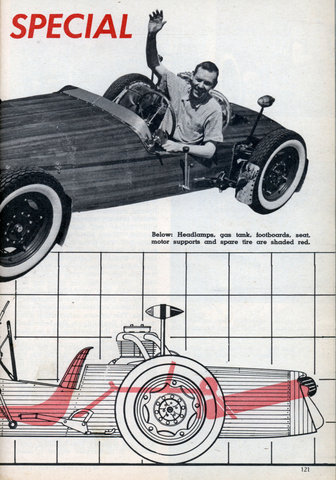 You can build this beautiful sports car for less than $500 with ordinary tools.

HOW would you like to own this snazzy-looking mahogany-paneled sports car? You canâ€”and for less than $500 if you are the least bit handy with ordinary tools and not afraid to get your hands dirty. The entire chassis and body are made of wood. The power plant can consist of any 2- to 4-cylinder motorcycle engine. Because of its high power to weight ratio, about 12.3 to 1, you will be able to do close to 90 mph. The finished car will weigh in the neighborhood of 750 pounds. 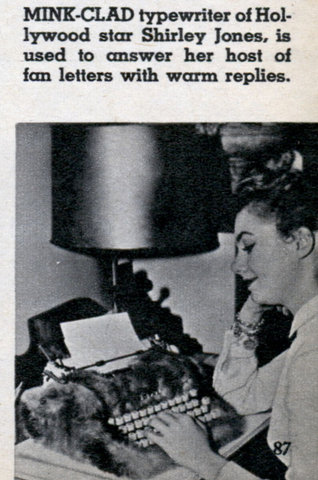 MINK-CLAD typewriter of Hollywood star Shirley Jones, is used to answer her host of fan letters with warm replies. 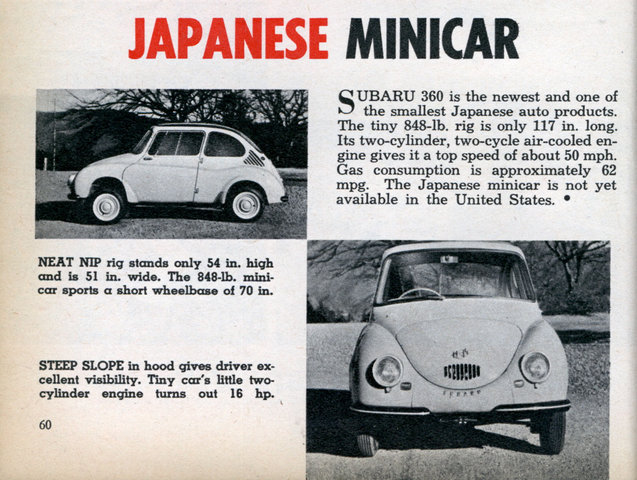 Japanese Minicar
SUBARU 360 is the newest and one of the smallest Japanese auto products. The tiny 848-lb. rig is only 117 in. long. Its two-cylinder, two-cycle air-cooled engine gives it a top speed of about 50 mph. Gas consumption is approximately 62 mpg. The Japanese minicar is not yet available in the United States.