This method is also very effective for finding gasoline leaks. When you you notice the jet of flames, you’ve found your leak. 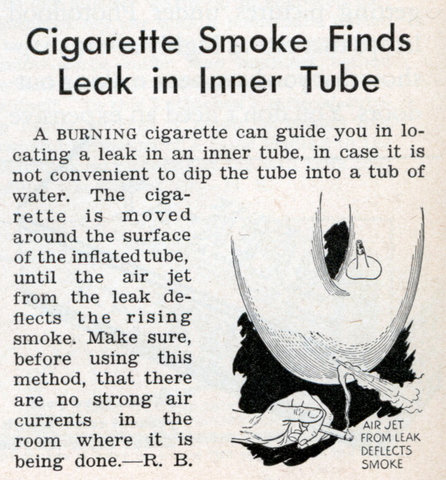 Cigarette Smoke Finds Leak in Inner Tube
A burning cigarette can guide you in locating a leak in an inner tube, in case it is not convenient to dip the tube into a tub of water. The cigarette is moved around the surface of the inflated tube, until the air jet from the leak deflects the rising smoke. Make sure, before using this method, that there are no strong air currents in the room where it is being done.â€”R. B. 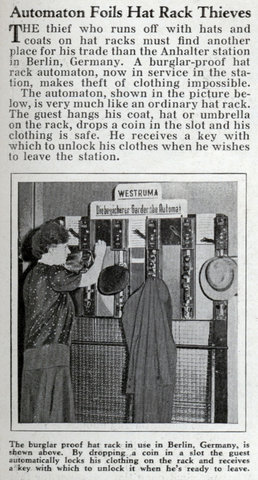 THE thief who runs off with hats and coats on hat racks must find another place for his trade than the Anhalter station in Berlin, Germany. A burglar-proof hat rack automaton, now in service in the station, makes theft of clothing impossible. The automaton, shown in the picture below, is very much like an ordinary hat rack. The guest hangs his coat, hat or umbrella on the rack, drops a coin in the slot and his clothing is safe. He receives a key with which to unlock his clothes when he wishes to leave the station. 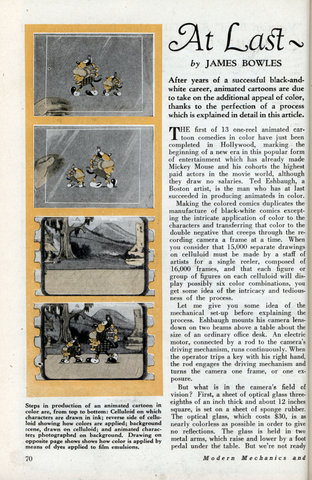 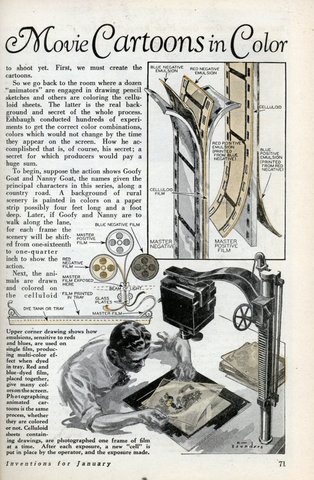 THE first of 13 one-reel animated cartoon comedies in color have just been completed in Hollywood, marking the beginning of a new era in this popular form of entertainment which has already made Mickey Mouse and his cohorts the highest paid actors in the movie world, although they draw no salaries. Ted Eshbaugh, a Boston artist, is the man who has at last succeeded in producing animateds in color.

It seems to me that if the two scientists from “Firm A” are geeking out about their work and not paying attention to the “Sweet Young Thing” then they deserve to lose any secrets they may have. 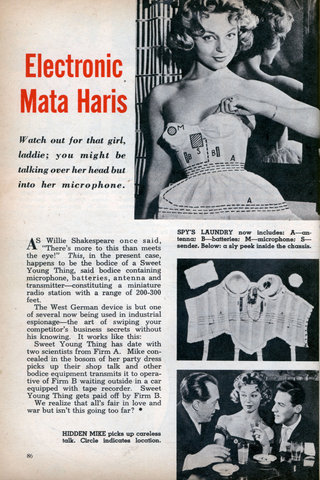 Watch out for that girl, laddie; you might be talking over her head but into her microphone.

AS Willie Shakespeare once said, – “There’s more to this than meets the eye!” This, in the present case, happens to be the bodice of a Sweet Young Thing, said bodice containing microphone, batteries, antenna and transmitterâ€”constituting a miniature radio station with a range of 200-300 feet.

I get the feeling this poor kid’s father embarrassed him during his whole childhood. I can imagine the picture of him modeling his father’s bullet-proof lederhosen. 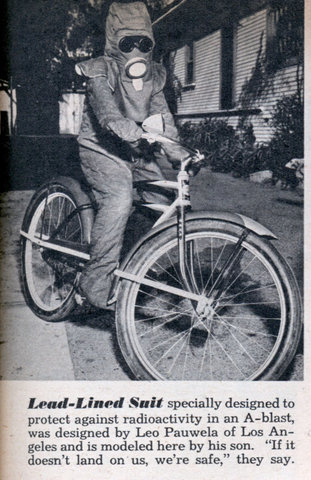 Lead-Lined Suit specially designed to protect against radioactivity in an A-blast, was designed by Leo Pauwela of Los Angeles and is modeled here by his son. “If it doesn’t land on us, we’re safe,” they say.

Be sure to check out the miraculous ectoplasm on the third page. I, like many people, thought that ectoplasm was a greenish slime, but it turns out that is actually looks like ramen. 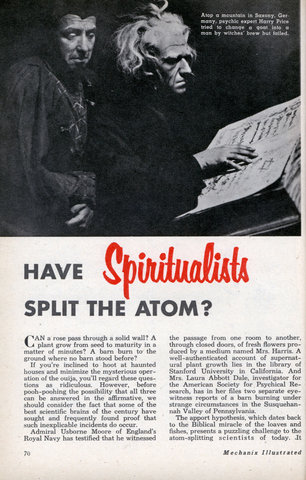 Have Spiritualists Split the Atom?

CAN a rose pass through a solid wall? A plant grow from seed to maturity in a matter of minutes? A barn burn to the ground where no barn stood before?

If you’re inclined to hoot at haunted houses and minimize the mysterious operation of the ouija, you’ll regard these questions as ridiculous. However, before pooh-poohing the possibility that all three can be answered in the affirmative, we should consider the fact that some of the best scientific brains of the century have sought and frequently found proof that such inexplicable incidents do occur. 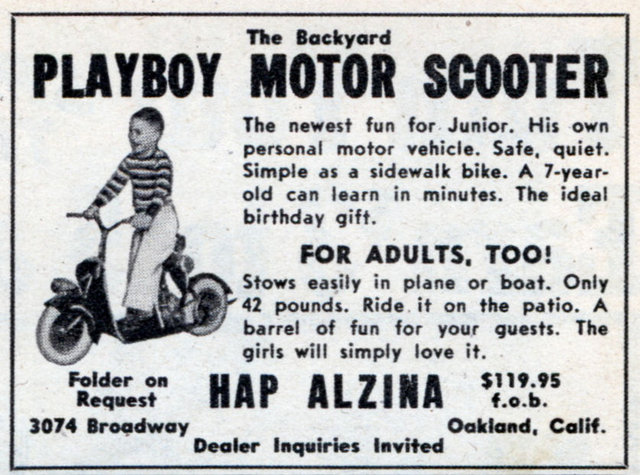 The newest fun for Junior. His own personal motor vehicle. Safe, quiet. Simple as a sidewalk bike. A 7-year-old can learn in minutes. The ideal birthday gift.
FOR ADULTS. TOO!

Stows easily in plane or boat. Only 42 pounds. Ride it on the patio. A barrel of fun for your guests. The girls will simply love it.

Mechanix Illustrated
Issue: Jul, 1973
Posted in: Ahead of its time, Automotive
No Comments on A New Switch for Electrics (Jul, 1973) 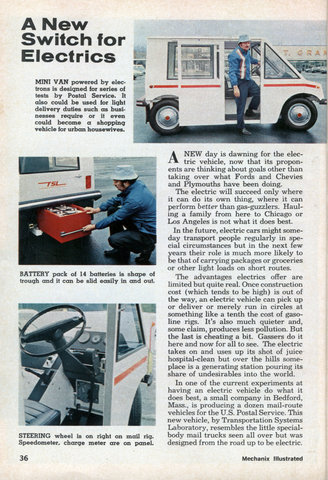 A New Switch for Electrics

A NEW day is dawning for the electric vehicle, now that its proponents are thinking about goals other than taking over what Fords and Chevies and Plymouths have been doing.

The electric will succeed only where it can do its own thing, where it can perform better than gas-guzzlers. Hauling a family from here to Chicago or Los Angeles is not what it does best.

We learn a few important things from this ad: 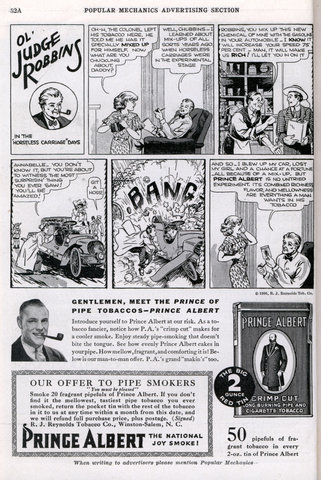 Introduce yourself to Prince Albert at our risk. As a tobacco fancier, notice how P. A.’s “crimp cut” makes for a cooler smoke. Enjoy steady pipe-smoking that doesn’t bite the tongue. See how evenly Prince Albert cakes in yourpipe. How mellow, fragrant, and comforting it is! Below is our man-to-man offer. P. A.’s grand “makin’s” too.

Actually, this is 10% about the melon cops and 90% a plug for the “professional, scientific”, melon farming industry. 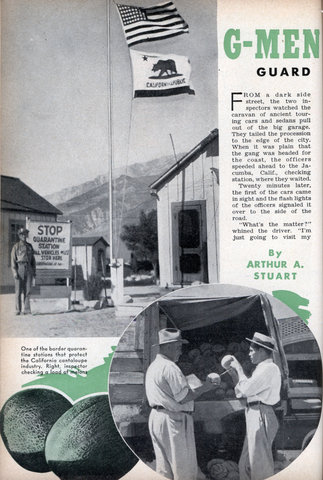 FROM a dark side street, the two inspectors watched the caravan of ancient touring cars and sedans pull out of the big garage. They tailed the procession to the edge of the city. When it was plain that the gang was headed for the coast, the officers speeded ahead to the Jacumba, Calif., checking station, where they waited. Twenty minutes later, the first of the cars came in sight and the flash lights of the officers signaled it over to the side of the road.