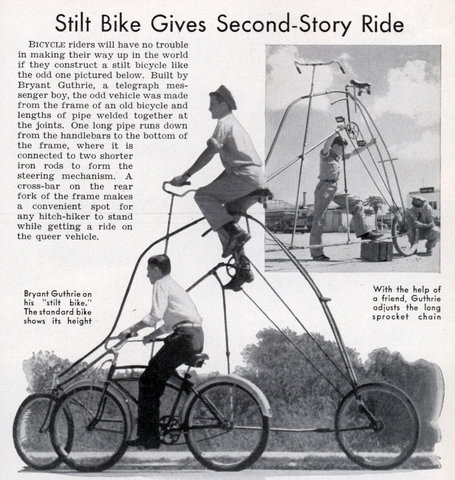 Bicycle riders will have no trouble in making their way up in the world if they construct a stilt bicycle like the odd one pictured below. Built by Bryant Guthrie, a telegraph messenger boy, the odd vehicle was made from the frame of an old bicycle and lengths of pipe welded together at the joints. One long pipe runs down from the handlebars to the bottom of the frame, where it is connected to two shorter iron rods to form the steering mechanism. A cross-bar on the rear fork of the frame makes a convenient spot for any hitch-hiker to stand while getting a ride on the queer vehicle.

Modern Mechanix
Issue: May, 1934
Posted in: Just Weird, Photography
2 Comments on Camera Nearly as Large as Man (May, 1934) 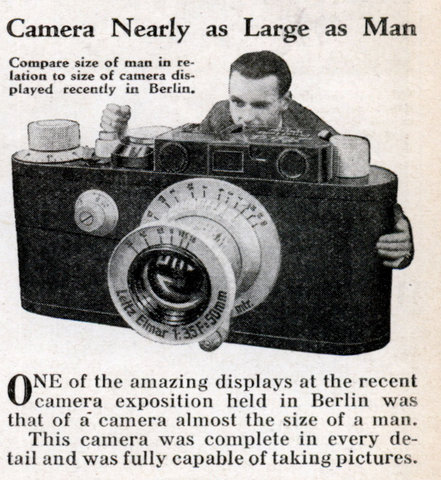 Camera Nearly as Large as Man

ONE of the amazing displays at the reeent camera exposition held in Berlin was that of a camera almost the size of a man. This camera was complete in every detail and was fully capable of taking pictures. 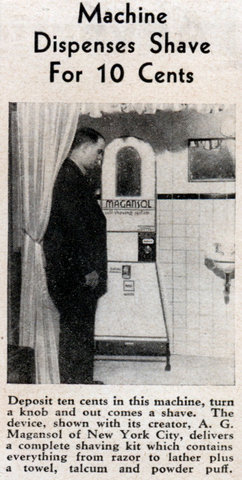 Deposit ten cents in this machine, turn a knob and out conies a shave. The device, shown with its creator, A.G-Magansol of New York City, delivers a complete shaving kit which contains everything from razor to lather plus a towel, talcum and powder puff.

This is pretty interesting indication of how recent our idea of “privacy rights” are. Apparently people were so curious as to what others were saying on the phone line that they would tap into them and listen in. This caused the voltage to drop and the signal to degrade. The solution? Add pre-installed, high-quality phones where they could “officially” listen in. 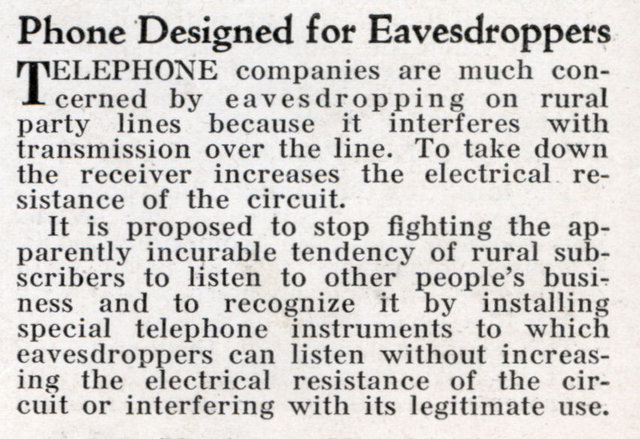 TELEPHONE companies are much concerned by eavesdropping on rural party lines because it interferes with transmission over the line. To take down the receiver increases the electrical resistance of the circuit.

It is proposed to stop fighting the apparently incurable tendency of rural subscribers to listen to other people’s business and to recognize it by installing special telephone instruments to which eavesdroppers can listen without increasing the electrical resistance of the circuit or interfering with its legitimate use.

Learn how to become a GAME WARDEN

Mechanix Illustrated
Issue: Dec, 1953
Posted in: Advertisements
No Comments on Party Records FOR ADULTS ONLY (Dec, 1953) 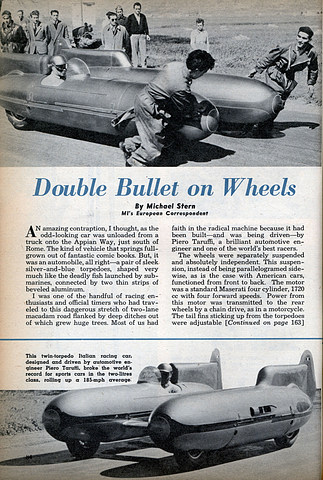 AN amazing contraption, I thought, as the odd-looking car was unloaded from a truck onto the Appian Way, just south of Rome. The kind of vehicle that springs full-grown out of fantastic comic books. But, it was an automobile, all rightâ€”a pair of sleek silver-and-blue torpedoes, shaped very much like the deadly fish launched by submarines, connected by two thin strips of beveled aluminum. 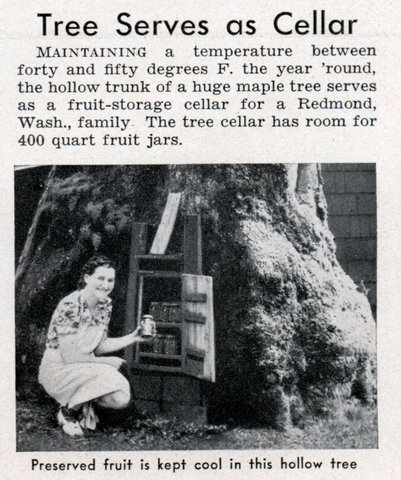 Tree Serves as Cellar
Maintaining a temperature between forty and fifty degrees F. the year ’round, the hollow trunk of a huge maple tree serves as a fruit-storage cellar for a Redmond, Wash., family. The tree cellar has room for 400 quart fruit jars. 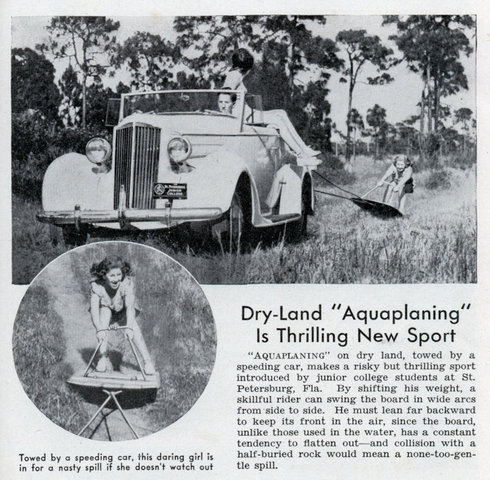 “Aquaplaning” on dry land, towed by a speeding car, makes a risky but thrilling” sport introduced by junior college students at St. Petersburg, Fla. By shifting his weight, a skillful rider can swing the board in wide arcs from side to side. He must lean far backward to keep its front in the air, since the board, unlike those used in the water, has a constant tendency to flatten outâ€”and collision with a half-buried rock would mean a none-too-gentle spill.

This thing kind of looks like a little Deathstar, and it will only take 10 trips to build. Let’s do it!

Also, they claim the atomic reactor reaches tempuratures of 600 billion degrees. Does this seem a little high to anyone else? 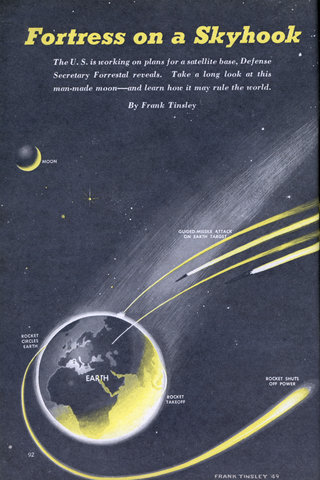 Fortress on a Skyhook

The U.S. is working on plans for a satellite base, Defense Secretary Forrestal reveals. Take a long look at this man-made moonâ€”and learn how it may rule the world.

EVEN Jules Verne would be amazed at the latest activities of the U. S. Department of Defense. Secretary James Forrestal disclosed recently that his department is working on a “satellite base” to revolve around the world like a miniature moon, as a military outpost in space.