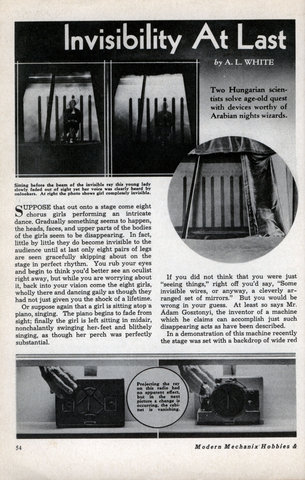 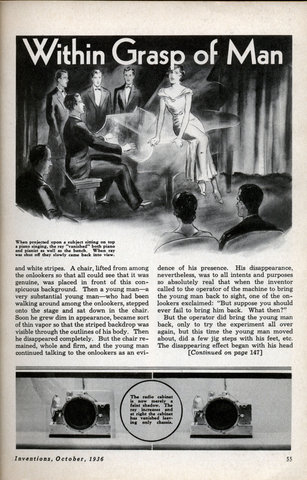 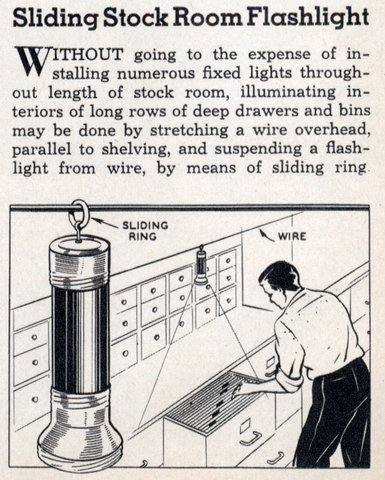 WITHOUT going to the expense of installing numerous fixed lights throughout length of stock room, illuminating interiors of long rows of deep drawers and bins may be done by stretching a wire overhead, parallel to shelving, and suspending a flashlight from wire, by means of sliding ring 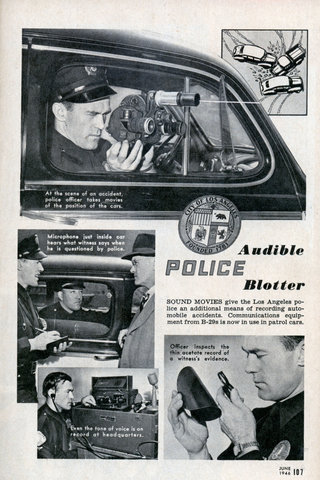 Popular Science
Issue: Feb, 1947
Posted in: Communications
Tags: how its made, phonograph
6 Comments on How PHONOGRAPH RECORDS are made (Feb, 1947) 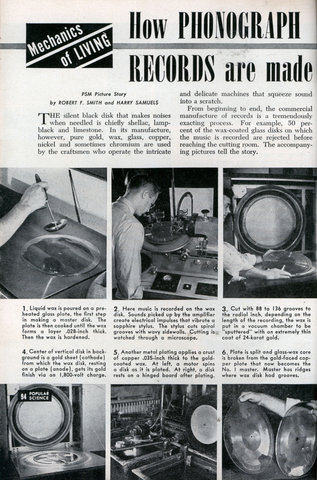 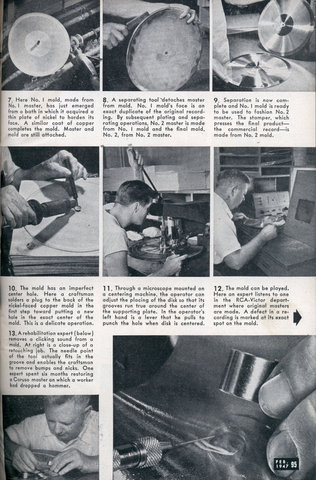 How PHONOGRAPH RECORDS are made

PSM Picture Story by ROBERT F. SMITH and HARRY SAMUELS
THE silent black disk that makes noises when needled is chiefly shellac, lampblack and limestone. In its manufacture, however, pure gold, wax, glass, copper, nickel and sometimes chromium are used by the craftsmen who operate the intricate and delicate machines that squeeze sound into a scratch.

From beginning to end, the commercial manufacture of records is a tremendously exacting process. For example, 50 percent of the wax-coated glass disks on which the music is recorded are rejected before reaching the cutting room. The accompanying pictures tell the story.

Wow, that is one big ass speakerphone. 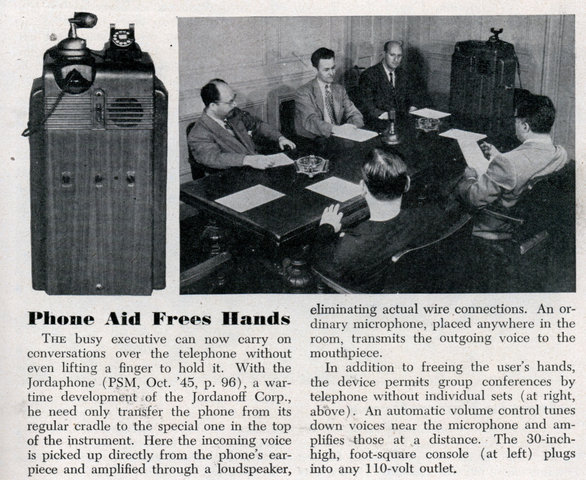 The busy executive can now carry on conversations over the telephone without even lifting a finger to hold it. With the Jordaphone (PSM, Oct. ’45, p. 96), a wartime development of the Jordanoff Corp., he need only transfer the phone from its regular cradle to the special one in the top of the instrument. Here the incoming voice is picked up directly from the phone’s earpiece and amplified through a loudspeaker, eliminating actual wire connections. An ordinary microphone, placed anywhere in the room, transmits the outgoing voice to the mouthpiece.

Try as I might, I just can’t think of any possible way that a kid could hurt himself with one of these…

Guided-flight accuracyâ€”bullet-like power for target and small game! Quietâ€”fun in rumpus room or patio, on picnics, in areas closed to firearms! Safe to carry in car. Economicalâ€”use arrows over and over! 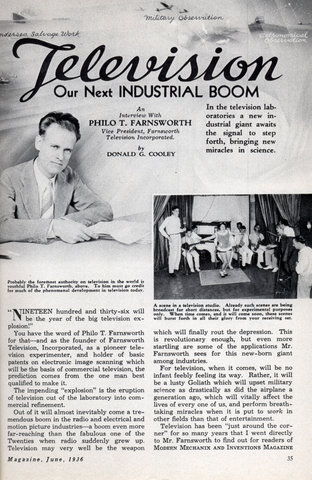 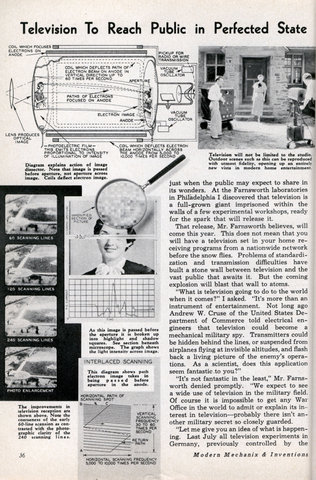 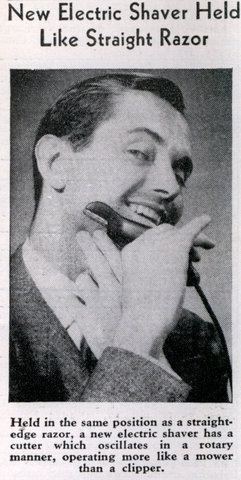 Held in the same position as a straightedge razor, a new electric shaver has a cutter which oscillates in a rotary manner, operating more like a mower
than a clipper. 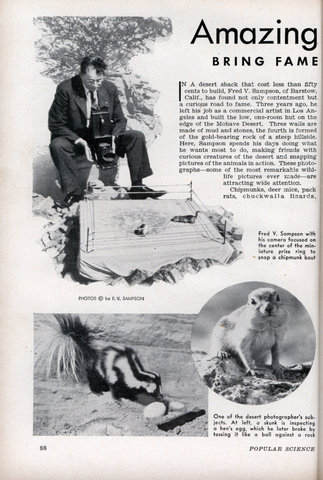 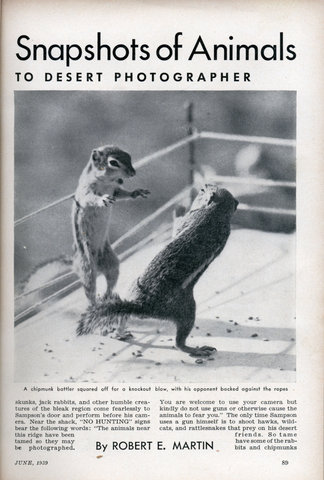 IN A desert shack that cost less than fifty cents to build, Fred V. Sampson, of Barstow, Calif., has found not only contentment but a curious road to fame. Three years ago, he left his job as a commercial artist in Los Angeles and built the low, one-room hut on the edge of the Mohave Desert. Three wails are made of mud and stones, the fourth is formed of the gold-bearing rock of a steep hillside. Here, Sampson spends his days doing what he wants most to do, making friends with curious creatures of the desert and snapping pictures of the animals in action. These photographsâ€”some of the most remarkable wildlife pictures ever madeâ€”are attracting wide attention. 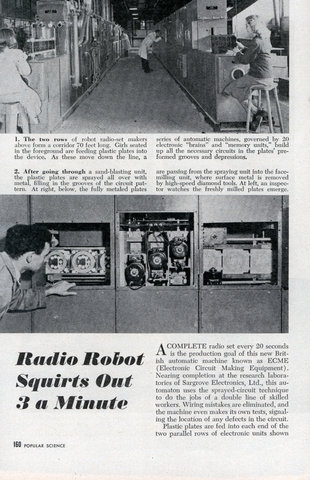 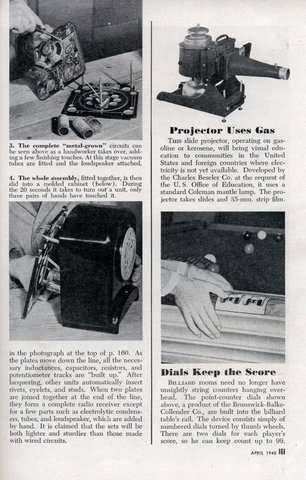 Radio Robot Squirts Out 3 a Minute

A COMPLETE radio set every 20 seconds is the production goal of this new British automatic machine known as ECME (Electronic Circuit Making Equipment). Nearing completion at the research laboratories of Sargrove Electronics, Ltd., this automaton uses the sprayed-circuit technique to do the jobs of a double line of skilled workers. Wiring mistakes are eliminated, and the machine even makes its own tests, signaling the location of any defects in the circuit.

Plastic plates are fed into each end of the two parallel rows of electronic units shown in the photograph at the top of p. 160. As the plates move down the line, all the necessary inductances, capacitors, resistors, and potentiometer tracks are “built up.” After lacquering, other units automatically insert rivets, eyelets, and studs. When two plates are joined together at the end of the line, they form a complete radio receiver except for a few parts such as electrolytic condensers, tubes, and loudspeaker, which are added by hand. It is claimed that the sets will be both lighter and sturdier than those made with wired circuits.