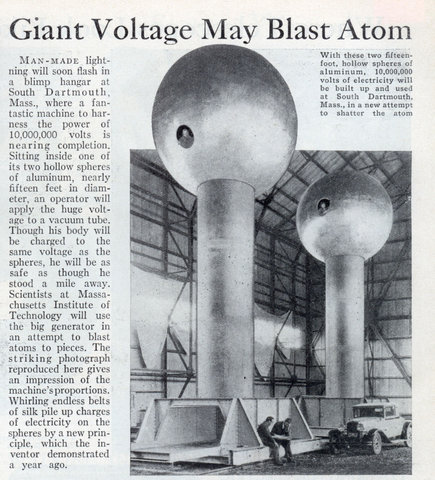 Man-made lightning will soon flash in a blimp hangar at South Dartmouth, Mass., where a fantastic machine to harness the power of 10,000,000 volts is nearing completion. Sitting inside one of its two hollow spheres of aluminum, nearly fifteen feet in diameter, an operator will apply the huge voltage to a vacuum tube. Though his body will be charged to the same voltage as the spheres, he will be as safe as though he stood a mile away. Scientists at Massachusetts Institute of Technology will use the big generator in an attempt to blast atoms to pieces. The striking photograph reproduced here gives an impression of the machine’s proportions. Whirling endless belts of silk pile up charges of electricity on the spheres by a new principle, which the inventor demonstrated a year ago. 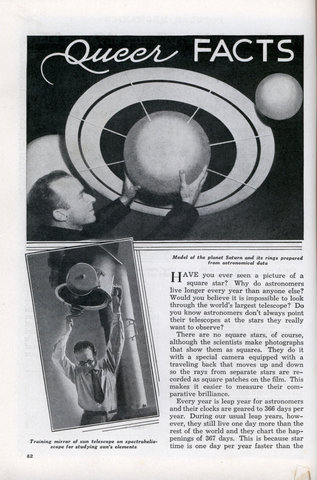 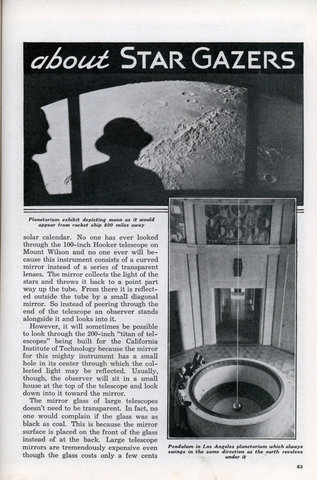 HAVE you ever seen a picture of a square star? Why do astronomers live longer every year than anyone else? Would you believe it is impossible to look through the world’s largest telescope? Do you know astronomers don’t always point their telescopes at the stars they really want to observe?

There are no square stars, of course, although the scientists make photographs that show them as squares. They do it with a special camera equipped with a traveling back that moves up and down so the rays from separate stars are recorded as square patches on the film. This makes it easier to measure their comparative brilliance.

That’s a rather interesting border the Kalamazoo Stove Company has. I wonder if their catalogs were popular in Germany?

I also think that “Speed! I Guess Yes!” is an awesome tagline for a car company and should be recycled today. 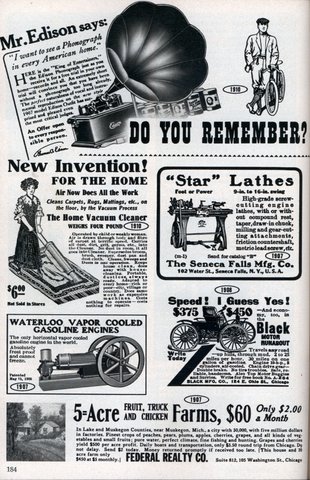 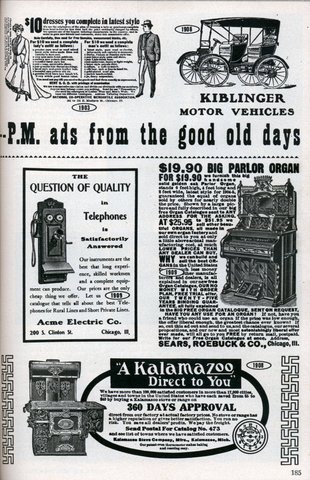 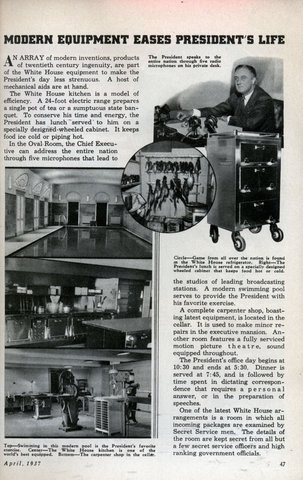 MODERN EQUIPMENT EASES PRESIDENT’S LIFE
AN ARRAY of modern inventions, products of twentieth century ingenuity, are part of the White House equipment to make the President’s day less strenuous. A host of mechanical aids are at hand.

The White House kitchen is a model of efficiency. A 24-foot electric range prepares a single pot of tea or a sumptuous state banquet. To conserve his time and energy, the President has lunch served’ to him on a specially designed wheeled cabinet. It keeps food ice cold or piping hot. 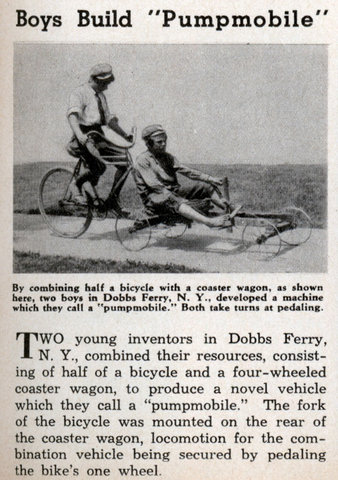 Boys Build “Pumpmobile”
TWO young inventors in Dobbs Ferry, N. Y., combined their resources, consisting of half of a bicycle and a four-wheeled coaster wagon, to produce a novel vehicle which they call a “pumpmobile.” The fork of the bicycle was mounted on the rear of the coaster wagon, locomotion for the combination vehicle being secured by pedaling the bike’s one wheel.

This is a really fun read for anyone who has ever ridden the NYC subway and wants to know how it works. I think that besides the fact that subways are all one unified system now not much has changed since this article was written 70 years ago. 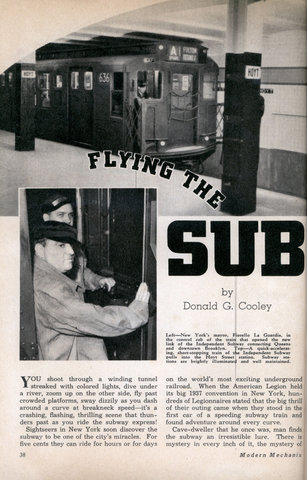 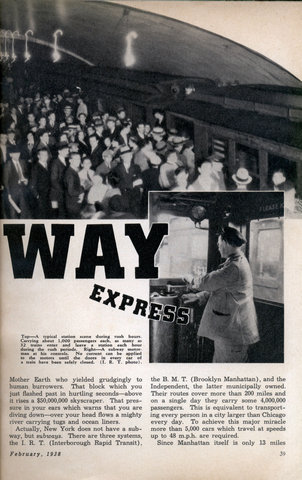 YOU shoot through a winding tunnel streaked with colored lights, dive under a river, zoom up on the other side, fly past crowded platforms, sway dizzily as you dash around a curve at breakneck speedâ€”it’s a crashing, flashing, thrilling scene that thunders past as you ride the subway express!

Sightseers in New York soon discover the subway to be one of the city’s miracles. For five cents they can ride for hours or for days on the world’s most exciting underground railroad. When the American Legion held its big 1937 convention in New York, hundreds of Legionnaires stated that the big thrill of their outing came when they stood in the first car of a speeding subway train and found adventure around every curve. 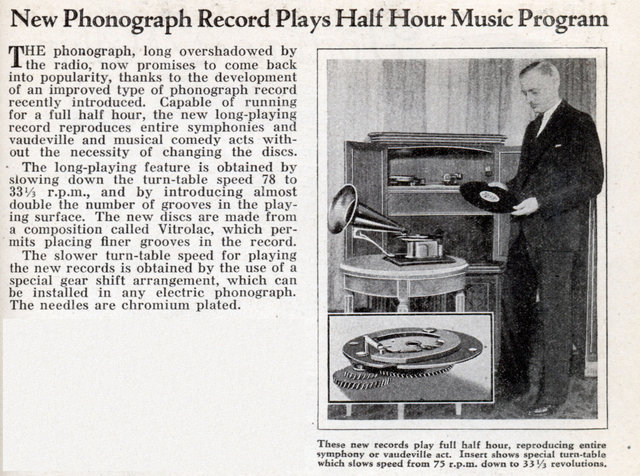 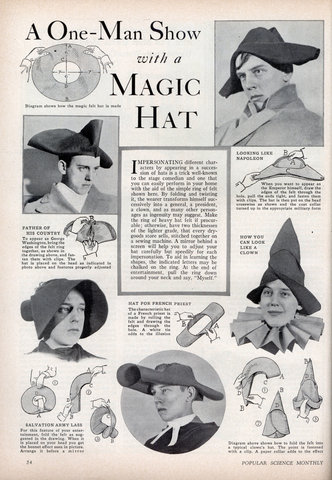 A One-Man Show with a Magic Hat

IMPERSONATING different characters by appearing in a succession of hats is a trick well-known to the stage comedian and one that you can easily perform in your home with the aid of the simple ring of felt shown here. By folding and twisting it, the wearer transforms himself successively into a general, a president, a clown, and as many other personages as ingenuity may suggest. Make the ring of heavy hat felt if procurable; otherwise, have two thicknesses of the lighter grade, that every dry-goods store sells, stitched together on a sewing machine. A mirror behind a screen will help you to adjust your hat carefully but speedily for each impersonation. To aid in learning the shapes, the indicated letters may be chalked on the ring. At the end of entertainment, pull the ring down around your neck and say, “Myself.” 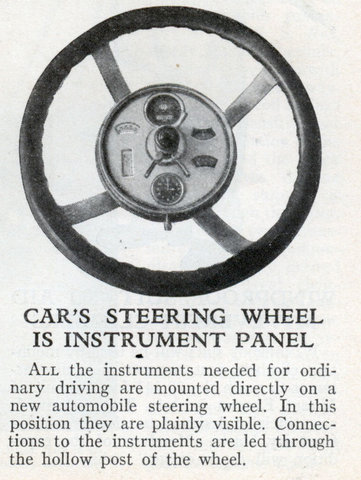 CAR’S STEERING WHEEL IS INSTRUMENT PANEL
All the instruments needed for ordinary driving are mounted directly on a new automobile steering wheel. In this position they are plainly visible. Connections to the instruments are led through the hollow post of the wheel. 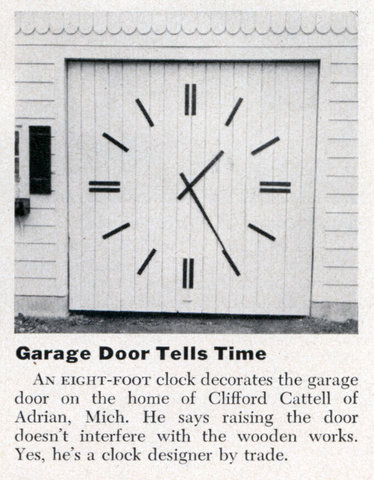 Garage Door Tells Time
An eight-foot clock decorates the garage door on the home of Clifford Cattell of Adrian, Mich. He says raising the door doesn’t interfere with the wooden works. Yes, he’s a clock designer by trade.