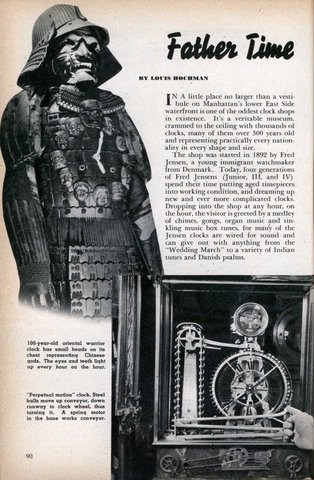 IN A little place no larger than a vestibule on Manhattan’s lower East Side waterfront is one of the oddest clock shops in existence. It’s a veritable museum, crammed to the ceiling with thousands of clocks, many of them over 300 years old and representing practically every nationality in every shape and size.

The shop was started in 1892 by Fred Jensen, a young immigrant watchmaker from Denmark. Today, four generations of Fred Jensens (Junior, III, and IV) spend their time putting aged timepieces, into working condition, and dreaming up new and ever more complicated clocks. Dropping into the shop at any hour, on the hour, the visitor is greeted by a medley of chimes, gongs, organ music and tinkling music box tunes, for many of the Jensen clocks are wired for sound and can give out with anything from the “Wedding March” to a variety of Indian tunes and Danish psalms.

Popular Science
Issue: May, 1933
Posted in: Toys and Games
No Comments on Homemade Flying Instructor Gives Air Thrills (May, 1933)

Two eighteen-year-old boys of Turlock, Calif., have built themselves a flying instructor that provides virtually all the thrills of piloting a piano. Passengers are strapped in two miniature aircraft that fly in circles around the supporting framework, under the power of gasoline motors, as shown at left. The baby planes are tethered to a rotating crosspiece in such a way that they are free to roll and perform other aerial evolutions at the pilot’s touch of the controls. An operator riding on top of the crossbeam may apply a brake lever, or cut off the ignition, if the enthusiastic pilots acquire too much speed. Over week-ends the boys tow their device on a trailer base to nearby towns, and charge for rides.

Popular Science
Issue: Jul, 1933
Posted in: Sign of the Times
No Comments on Tricks of Firebugs EXPOSED BY POLICE EXPERTS (Jul, 1933)

I particularly like the story about the cops allowing arsonists to set fire to a building full of innocent people just so they could “catch them in the act”. 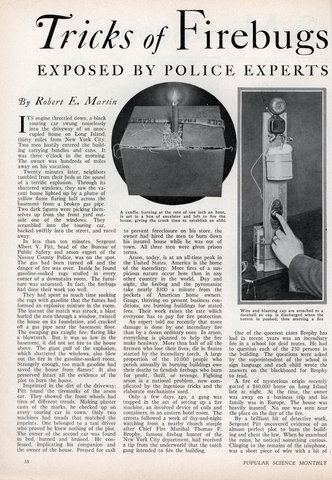 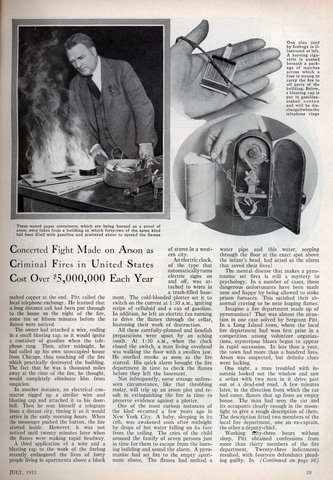 ITS engine throttled down, a black touring car swung noiselessly into the driveway of an unoccupied house on Long Island, thirty miles from New York City. Two men hastily entered the building carrying bundles and cans. It was three o’clock in the morning. The owner was hundreds of miles away on his vacation.

Twenty minutes later, neighbors tumbled from their beds at the sound of a terrific explosion. Through its shattered windows, they saw the vacant house lighted up by a plume of yellow flame flaring half across the basement from a broken gas pipe. Two dark figures were picking themselves up from the front yard outside one of the windows. They scrambled into the touring car, backed swiftly into the street, and raced away.