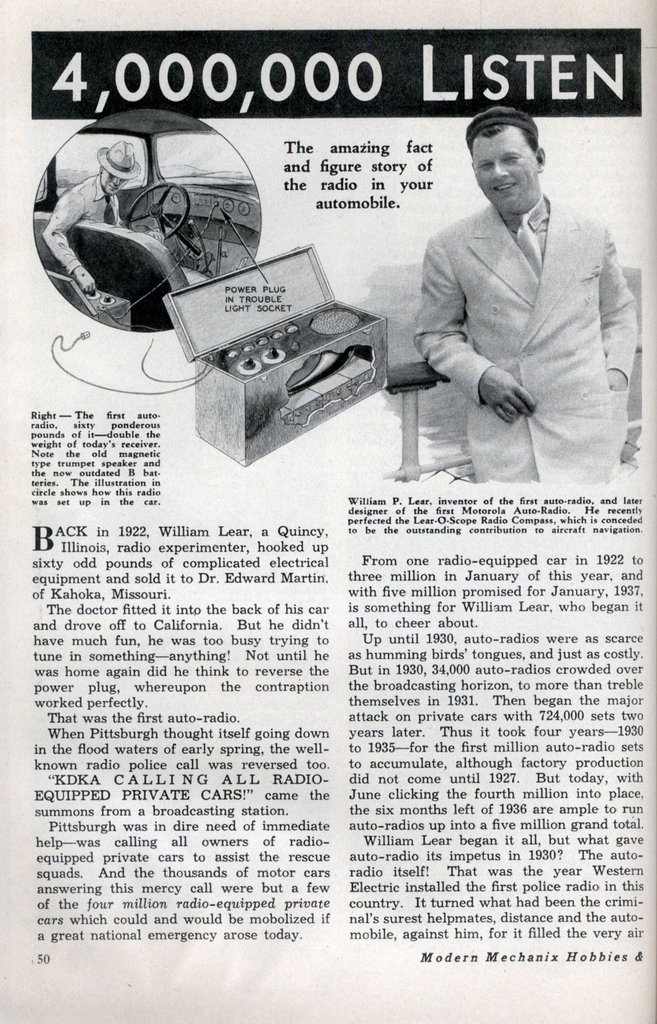 The amazing fact and figure story of the radio in your automobile.

BACK in 1922, William Lear, a Quincy, Illinois, radio experimenter, hooked up sixty odd pounds of complicated electrical equipment and sold it to Dr. Edward Martin, of Kahoka, Missouri.

The doctor fitted it into the back of his car and drove off to California. But he didn’t have much fun, he was too busy trying to tune in somethingâ€”anything! Not until he was home again did he think to reverse the power plug, whereupon the contraption worked perfectly.

That was the first auto-radio.

When Pittsburgh thought itself going down in the flood waters of early spring, the well-known radio police call was reversed too.

“KDKA CALLING ALL RADIO-EQUIPPED PRIVATE CARS!” came the summons from a broadcasting station.

From one radio-equipped car in 1922 to three million in January of this year, and with five million promised for January, 1937, is something for William Lear, who began it all, to cheer about.

Up until 1930, auto-radios were as scarce as humming birds’ tongues, and just as costly. J But in 1930, 34,000 auto-radios crowded over the broadcasting horizon, to more than treble themselves in 1931. Then began the major attack on private cars with 724,000 sets two years later. Thus it took four yearsâ€”1930 to 1935â€”for the first million auto-radio sets to accumulate, although factory production did not come until 1927. But today, with June clicking the fourth million into place, the six months left of 1936 are ample to run auto-radios up into a five million grand total.

William Lear began it all, but what gave auto-radio its impetus in 1930? The auto-radio itself! That was the year Western Electric installed the first police radio in this country. It turned what had been the criminal’s surest helpmates, distance and the automobile, against him, for it filled the very air with alarms. Since, in the short space of six years, more than 75 municipal, county and state police departments are using police radio equipment to safeguard 45,000,000 peopleâ€”one-third of the country’s population.

During these years, 75,000 taxicabs installed auto-radios and in the fall of 1935 at Beaver Dam, Wis., a hitch-hiker refused to ride in the car of H. F. Bibby because his car had no radio.

The 1937 automobiles will come equipped with radios. In April, General Motors took over the Crosley Radio automobile division, and announced that at additional cost it would install radio as initial equipment. With other car manufacturers following suit, this means that radio is as definite a part of an automobile as the spare tire.

The Columbia Broadcasting System and Radio Retailing summarize the situation as follows:

The average length of auto-radio ownership has so far been one year, which isn’t surprising when you consider that more families have bought auto-radios since January, 1935 than all previous years combined.

The average cost of auto-radios went down steadily until 1935, then rose again, due to improved enginering features incorporated in the sets. But somewhat amazing is the fact that 64.7 per cent of auto-radios are in cars costing $1,000 and under, with cars in the $1,000 to $2,000 class accounting for 33.3 per cent. But the $2,000 to $3,000 car have only 1.2 per cent of the country’s auto-radios. The owners of radio-equipped cars, when asked what they thought of their auto-radios, said:

Husband: “I find my auto-radio helpful in reducing the amount of backseat driving.”

Father: “When the family in the house wants one program and I want another, I go out to the garage and turn on the car’s radio.”

Employer: “It starts the day cheerfully by giving me music on the way to the office.”

Salesman: “It is good company, especially after some buyer has turned me down.”

Long Distance Driver: “I am convinced it makes night driving safer. It keeps me from falling asleep.”

Police Chief: “No one has yet heard of a radio causing an automobile accident.”

Today, with the auto-radio and car manufacturer working hand in hand, there come multiple improvements for the 1936 sets. A closer grouping of ignition circuits and better treatment of high and low tension wiring has practically eliminated the actual radiation of spark interference. Noise filters in the aerial leads are also general, and a one or two-section low-pass filter is inserted to reject most of the energy below the broadcast band.

The bulk of the latest auto-radio sets are completely enclosed with no ventilating louvres and so provide excellent shielding. Direct radiation is through the metal case itself and is sufficient for all practical purposes.

Suppressors, one of the objectional features of the earlier auto-radios, are no longer required through the use of a special filter provided in the A battery leads. Metal tubes have replaced the fragile glass types which required more space.

Improved circuits featuring band pass filtering and automatic volume control have eliminated fading or reduction of the radio’s volume when passing under bridges and high tension wires. The more popular sets range in size from compact four-tube models to the advanced built-in 8 and 10-tube models.

So simple is the installation of an auto-radio that even those not familiar with radio can hook it up to the car. Just two wires project from the setâ€”the antenna connection and the lead wire, which connects to the car’s ammeter. The set automatically grounds itself when placed in the car.

The introduction of turret-top automobiles forced radio manufacturers to experiment with under car aerials, and today the low capacity, ruggedly built bar or strap type is the most popular. Because of the popularity of ear level reception there is a new and big crop of semi-universal head type speakers. In some sets a large speaker on the instrument board is used in conjunction with the overhead type.

For the first time in any automobile, a built-in wooden sounding board, integral with the speaker, is built across the forward section of all Cadillac and LaSalle turret-top roofs and is concealed by the headlining fabric.

Automatic frequency control, too, is something new. This circuit makes it impossible to tune way cut on the edge of a carrier and so ruin the tone.

The 1936 auto-radio sets range in price from $16.50 to $89.50. They are all excellent performers and most of them are designed to harmonize with the car’s fittings. Not less than 1,000,000 car radios will be sold before the new yearâ€”and that’s a lot of auto-radios.