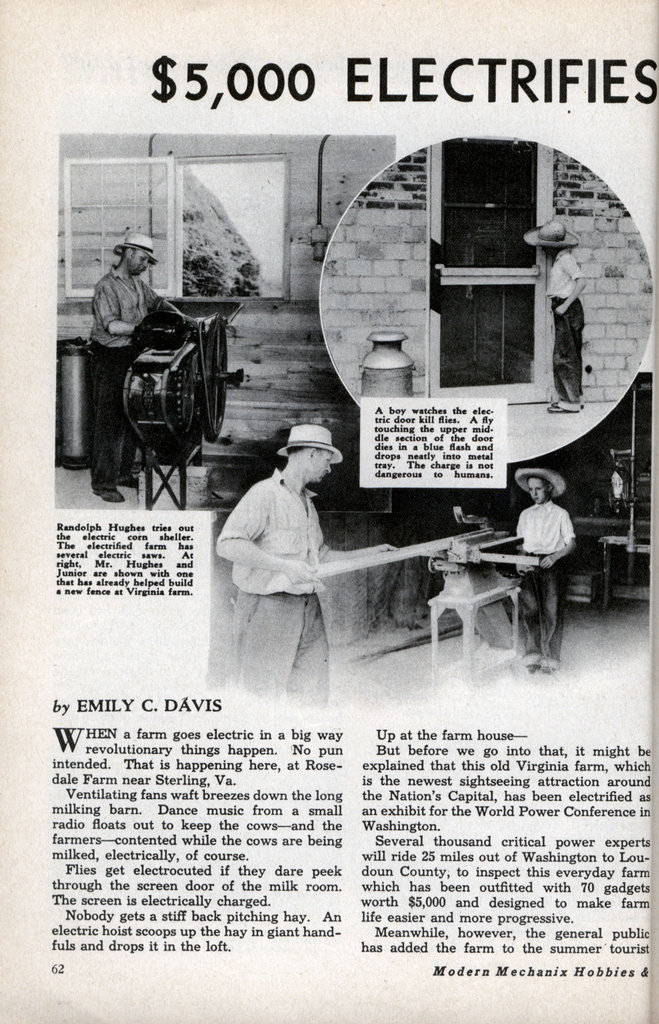 WHEN a farm goes electric in a big way revolutionary things happen. No pun intended. That is happening here, at Rose-dale Farm near Sterling, Va.

Ventilating fans waft breezes down the long milking barn. Dance music from a small radio floats out to keep the cows—and the farmers—contented while the cows are being milked, electrically, of course.

Flies get electrocuted if they dare peek through the screen door of the milk room. The screen is electrically charged.

Nobody gets a stiff back pitching hay. An electric hoist scoops up the hay in giant handfuls and drops it in the loft.

Up at the farm house— But before we go into that, it might be explained that this old Virginia farm, which is the newest sightseeing attraction around the Nation’s Capital, has been electrified as an exhibit for the World Power Conference in Washington.

Several thousand critical power experts will ride 25 miles out of Washington to Loudoun County, to inspect this everyday farm which has been outfitted with 70 gadgets worth $5,000 and designed to make farm life easier and more progressive.

Meanwhile, however, the general public has added the farm to the summer tourist sights. It is not so many miles from Mount Vernon, where the spirit of colonial America is kept devotedly alive, to this old farm that has suddenly become the spirit of electricity. What George Washington would think of it nobody can imagine.

This farm, chosen by the Rural Electrification Administration for exhibition use, has its own dash of romantic history. Generals Robert E. Lee and Stonewall Jackson conferred here, beside the kitchen fire. The fireplace is still here, with its old fashioned kettles and pans and its row of flat irons. But the Hughes family, who own the farm, do their ironing with an electric ironing machine. They cook on an electric range with automatic adjustments. They wash dishes by electricity and churn butter electrically, too.

Upstairs, in a quaint, low-ceiled bedroom where General Lee once slept, there is an air-conditioning unit that looks like an extra big radio.

J. M. Hughes and his two sons, Darr and Randolph, operate the 212-acre dairy farm. They can already explain how much time and labor some of the devices will save.

They have 75 cows, and milking over 40 of them twice a day, for instance, is a different job entirely with machinery.

“It took four or five men to do the milking,” says Randolph Hughes. “Now, we can do it with three, and in half the time. It saves a man and saves an hour.”

“Experiment stations,” he explains, “find that a cow will stand more contented and peaceful with music—not noisy jazz, but any light, pleasant pieces. If cows grow restless before milking is over, it may reduce the amount they give.”

It looks as though radio stations may have to include a milking hour twice a day in their musical programs, if this music for cows becomes a general fashion.

But, besides that, Mr. Hughes points out, the afternoon milking time comes along about the hour when baseball scores are given out. That keeps the men in the milking barn contented.

One novel use of electricity in the milking barn is running an electric clipper over the hind flanks of each cow. This shortening of the hair is a new idea in sanitation.

But the greatest thing on the farm, according to Darr Hughes, is the electric hoist for hay. One man with a wagonload of hay can unload it alone, and without the usual hard labor.

There is no stumbling around in a dark barnyard with a lantern at night, on the electrified farm. You flip a switch and presto the grounds are floodlighted.

Even keeping the cows out of the corn is managed electrically. There is a wire line along the pasture fence that carries a charge strong enough to teach any farm animal not to try to escape. After one or two contacts with the fence, cattle or pigs won’t go near it.

Visitors are particularly enthralled with the device for electrocuting flies. This can be seen at the entrance to the house where milk is cooled. The upper part of the screen door is wired so that any misguided fly that touches the screen gets a shock. A little blue flash signals the fly’s takeoff. He drops into a metal tray, along with numerous other brethren, all dead.

Practical-minded people absorb the information that this current is provided by small motors, nothing larger than five horsepower. The hookup is for 110 or 220 volts. The capacity is 45 kilowatts, which is the approximate equivalent of 750 60-watt light bulbs. – The farm used to have a small electric plant generating current for lights and water. It was what you might call a typical farmstead, run by experienced farmers who practised crop rotation and kept up-to-date as best they could. It is still a practical, working farm, so the power experts point out, and no model farm or research laboratory.