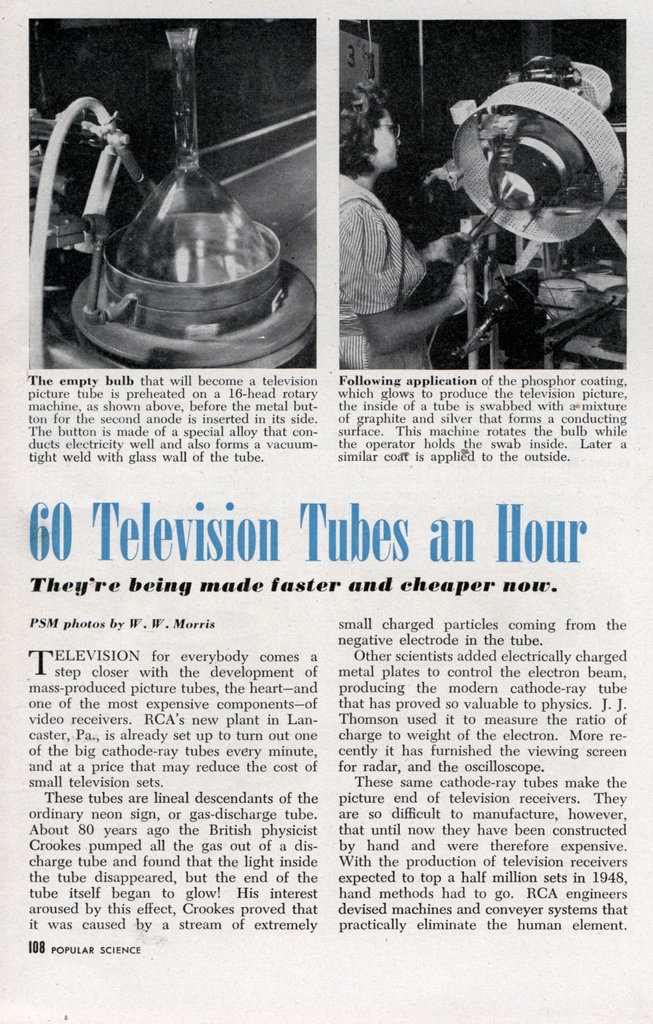 They’re being made faster and cheaper now.

TELEVISION for everybody comes a step closer with the development of mass-produced picture tubes, the heartâ€”and one of the most expensive componentsâ€”of video receivers. RCA’s new plant in Lancaster, Pa., is already set up to turn out one of the big cathode-ray tubes every minute, and at a price that may reduce the cost of small television sets.

These tubes are lineal descendants of the ordinary neon sign, or gas-discharge tube. About 80 years ago the British physicist Crookes pumped all the gas out of a discharge tube and found that the light inside the tube disappeared, but the end of the tube itself began to glow! His interest aroused by this effect, Crookes proved that it was caused by a stream of extremely small charged particles coming from the negative electrode in the tube.

Other scientists added electrically charged metal plates to control the electron beam, producing the modern cathode-ray tube that has proved so valuable to physics. J. J. Thomson used it to measure the ratio of charge to weight of the electron. More recently it has furnished the viewing screen for radar, and the oscilloscope.

These same cathode-ray tubes make the picture end of television receivers. They are so difficult to manufacture, however, that until now they have been constructed by hand and were therefore expensive. With the production of television receivers expected to top a half million sets in 1948, hand methods had to go. RCA engineers devised machines and conveyer systems that practically eliminate the human element.