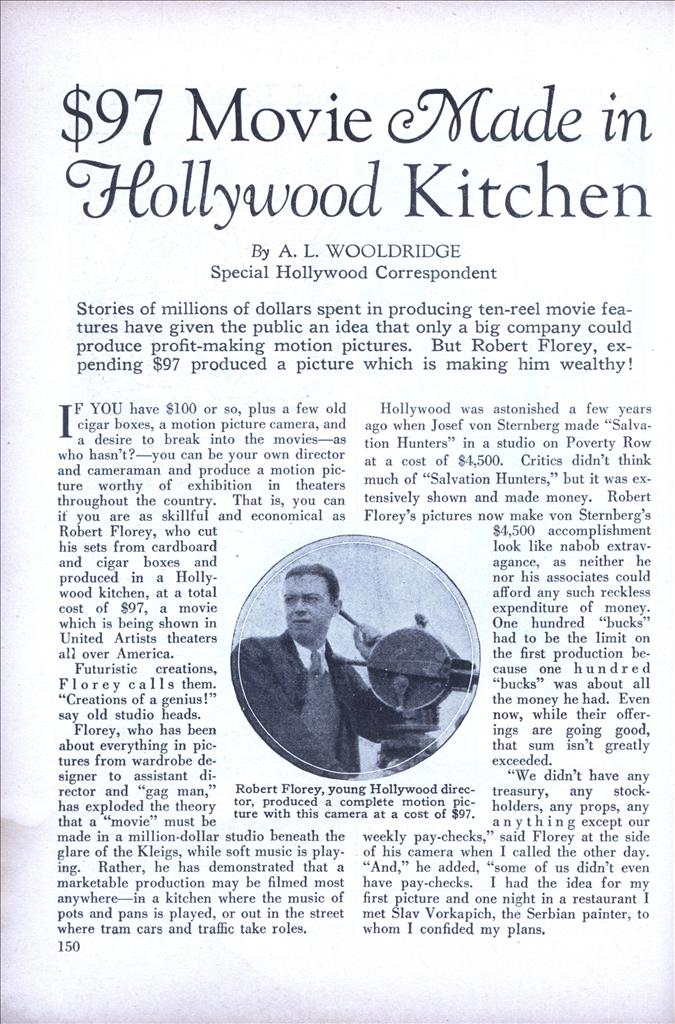 $97 Movie Made in Hollywood Kitchen

Stories of millions of dollars spent in producing ten-reel movie features have given the public an idea that only a big company could produce profit-making motion pictures. But Robert Florey, expending $97 produced a picture which is making him wealthy!

IF YOU have $100 or so, plus a few old cigar boxes, a motion picture camera, and a desire to break into the moviesâ€”as who hasn’t?â€”you can be your own director and cameraman and produce a motion picture worthy of exhibition in theaters throughout the country. That is, you can it you are as skillful and economical as Robert Florey, who cut his sets from cardboard and cigar boxes and produced in a Hollywood kitchen, at a total cost of $97, a movie which is being shown in United Artists theaters all over America.

Florey, who has been about everything in pictures from wardrobe designer to assistant director and “gag man,” has exploded the theory that a “movie” must be made in a million-dollar studio beneath the glare of the Kleigs, while soft music is playing. Rather, he has demonstrated that a marketable production may be filmed most anywhereâ€”in a kitchen where the music of pots and pans is played, or out in the street where tram cars and traffic take roles.

Hollywood was astonished a few years ago when Josef von Sternberg made “Salvation Hunters” in a studio on Poverty Row at a cost of $4,500. Critics didn’t think much of “Salvation Hunters,” but it was extensively shown and made money. Robert Florey’s pictures now make von Sternberg’s $4,500 accomplishment look like nabob extravagance, as neither he nor his associates could afford any such reckless expenditure of money. One hundred “bucks” had to be the limit on the first production because one hundred “bucks” was about all the money he had. Even now, while their offerings are going good, that sum isn’t greatly exceeded.

“We didn’t have any treasury, any stockholders, any props, any anything except our weekly pay-checks,” said Florey at the side of his camera when I called the other day. “And,” he added, “some of us didn’t even have pay-checks. I had the idea for my first picture and one night in a restaurant I met Slav Vorkapich, the Serbian painter, to whom I confided my plans.

” ‘Let’s buy the short ends of films at the studio,’ I suggested, ‘and make a picture. Short ends will cost us about 1 cent a foot. New film in rolls costs about 3 cents. I’ll cut out sets in miniatureâ€”make them from cardboard that comes back with my laundered shirts, and from boxes. Then you paint ’em. When we need big scenes, we’ll grab ’em on the streets.’ ”

The idea hit. Florey and Vorkapich pooled their possessions and went to work. They found they would have to invest fully $3 at a 5-and-10-cent store for three toy trains, four toy automobiles and a boy’s mechanical building set. Then there would have to be string, mucilage, a paper of pins and a few other small items.

In Vorkapich’s kitchen one night, Florey cut “buildings” with scissors and knife while his companion painted doors, windows, fire escapes and chimneys upon them. It took days to complete the task. Then the “producer” went out in search of actors temporarily out of employment, or rather, “between pictures,” as they term it.

They found Jules Raucort, a Belgian, who years ago was leading man for Pauline Frederick and later the star of several Maurice Tourneur productions. They stumbled upon Voya George, a Serbian whom Vorkapich knew. Both agreed to lend their talents, not for immediate compensation but for “part of the benefits” which might accrue. Adrian March, an “extra” girl, was induced to play the heroine of the picture for similar remuneration. In addition to these, the producers took roles themselves. Gregg Toland, cameraman for Samuel Goldwyn, agreed to photograph the production.

“Twenty scenes an hour,” directed Florey. “This is going to be a great picture. One hundred and fifty scenes. Let’s go.”

“Crazy” Story Makes Hit Their story, “The Life and Death of a Hollywood Extra,” was based on the experiences of an actor seeking employment. On every hand he encountered the sign, “No Casting Today.” He moved about in a daze, tired, hungry, revolving in his mind, “No Casting Today! No Casting Today I” A producer valuing him as only one of the thousands of “extras” brands him on the forehead with the number 9,413. He begins going “blah-blah” and moving his lips like a dummy. The world goes dizzy, buildings whirl round and round, street cars shoot toward heaven. From unexpected places pop out traffic signals “STOP” and “GO.” The goofy extra tries to comply with the confusing directions.

He meets a star who “high-hats” him, but finds that the star, too, is going crazy. Then the little heroine becomes demented. Finally, in utter exhaustion and thoroughly disgusted with life, the poor “extra” lies down to die. His spirit leaves its earthly body and turns to look at what has been carrying it around.

Then the extra awakens.

“Crazy!” one exclaims on seeing it.

Just the same, persons laugh uproariously at the exotic, distorted, “looney tale.” Virtually every trick of the motion picture camera is incorporated in its making. There are cut-backs, fade-ins, fade-outs, lap dis- solves, scenes shown upside down and others revolving.

At a private showing in the home of Charlie Chaplin, there were present Joseph Schenck, Doug and Mary, Camilla Horn, Harry d’Arrast and a few other motion picture people. As the impressionistic creation began to unreel, the audience snickered. Then it guffawed. Presently, in a dignified way, it howled.

“That’s good enough for our theaters,” exclaimed Mr. Schenck. “I think we could use a half dozen more.”