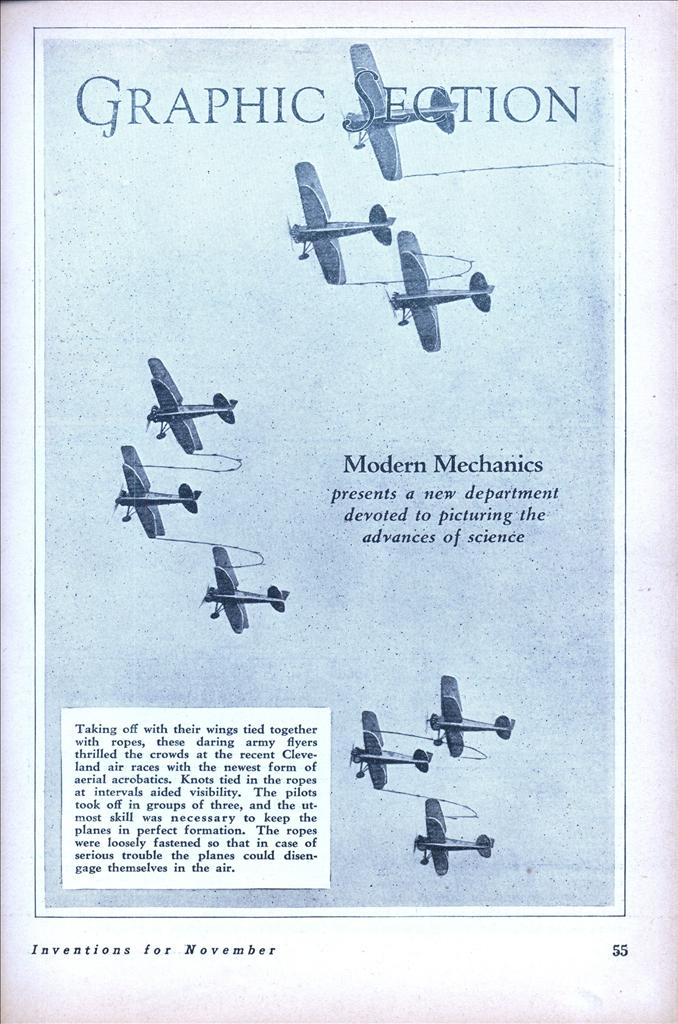 Modern Mechanics presents a new department devoted to picturing the advances of science.

Taking off with their wings tied together with ropes, these daring army flyers thrilled the crowds at the recent Cleveland air races with the newest form of aerial acrobatics. Knots tied in the ropes at intervals aided visibility. The pilots took off in groups of three, and the utmost skill was necessary to keep the planes in perfect formation. The ropes were loosely fastened so that in case of serious trouble the planes could disengage themselves in the air.

EMBODYING several novel features of construction, the Navy’s newest dirigible, the ZMC-2, recently went through its trial flights successfully. Instead of the usual elevator and rudder arrangement at the tail, such as is used on the Graf Zeppelin, the ZMC-2 has eight control fins mounted like the spokes of a wheel in the hull of the ship 30 feet forward of the stern. The fins were located in this position when designers discovered that better control can be secured by mounting the units in advance of the extreme stern of the ship where they could be acted on by air flowing along the surface of the craft. The eight fins are so synchronized that pairs on top and bottom act as rudders and pairs on the sides as elevators.

Two radial motors mounted on either side of the cabin propel the ZMC-2, as shown in the photo at the top of the page. With a length of 150 feet, the diameter of the ship is 50 feet, or a ratio of 3 to 1. Zeppelin airships have been from 7 to 12 times as long as their diameters. The thicker proportions represent the latest advance in lighter-than-air craft.

Fighting Airplanes Take to Sky Like a Swarm of Gnats

While his mother played bridge, 18-months-old Denny Mallon, of Los Angeles, whiled away the time by tuning in the radio set mounted on his baby carriage and listening to the latest lullabies and nursery rhymes. Young Denny is shown in the circle above tuning out a fox trot in favor of a bedtime story. The radio – equipped buggy was one of several which played a part in a Radio-Baby-Bridge party held the other day in Los Angeles as part of a radio show.

How many airplanes in the above photo? More than 125 fighting planes of the army, navy and marine corps took part in a demonstration flight above San Diego, Cal., and this vivid picture foreshadowing the crowded skies of tomorrow when bankers and clerks will come to work in their individual planes was the result. The flight gave a graphic picture of the helplessness of a city under the wings of a swarm of warbirds capable of dropping hundreds of tons of high explosives which would wipe a metropolis out of existence.

Here we have a pair of real live teddy bears munching their lunch from a baby gum tree. These are real live animals—not stuffed ones—and are known in their native land of Australia as koalas.

Novel interior decorations of the $5,000,000 Theatre Pigalle in Paris are shown above. Parallel metal bars reflect the beams of overhead spotlights in a series of brilliant flashes.

Mrs. Louise McPhetridge Thaden, of Pittsburgh, Pa., won first prize in the women’s air derby from Santa Monica, Cal., to Cleveland, Ohio, with a total elapsed flying time of 20 hours,. 19 minutes and 2 seconds. She is shown above accepting the congratulations of Clifford W. Henderson^ manager of the national air races at Cleveland. The women’s derby was marred with one death and a number of other mishaps. Marvel Crosson was 1 killed when her parachute did not have time to open after she had leaped from her disabled plane.

To give tennis players practice in returning services, this tennis ball machine gun has been invented. It fires 36 tennis balls at one loading, and is adjustable to 12 different speeds.

This 14-inch army gun at Ft. McArthur, Cal., will never be fired again except in case of war. Home owners near the fort complained that the vibrations damaged their houses.

A 40-foot leap on a motorcycle means nothing to John Balek of the Chicago police force. The motorcycle leap was one of the stunts at the annual police outing at Soldier’s Field.

$200 Automobile to be Sold Through Mail Order Houses

Weighing only 600 pounds, this light 3-passenger car will be distributed by mail order houses. Complete story of the car is told on page 152.

Designed to keep shipwreck victims afloat indefinitely, an ingenious new life suit is shown above being tried out by its inventor. Note the flipper-like paddles used for propelling oneself toward shore. The porthole of the helmet can be worn open in good weather. When a storm blows up, the porthole is closed.

Few people care to risk their lives in testing out newly developed parachute designs—that’s why these German aviators are using a rope dummy.

New York firemen are now equipped with gas masks of a special “smoke eating” type which permit the fire laddies to walk through smoke-filled cellars in safety. In a demonstration of the new device, shown in the picture above, one fireman “rescued” another from a basement entirely filled with smoke.

An ordinary bicycle pump, connected with rubber tubing to a tin bucket with a hole in the bottom, comprises the diving apparatus of Clarence Chandler, of Dallas, Texas. With an assistant operating the pump, young Chandler scours the bottom of a lake alongside a golf course and recovers lost balls.

An innovation in water craft has been designed by E. H. Messick, of Sea Island Beach, Georgia, shown above in his novel sea sled made from an inner tube propelled by an outboard motor. The tube is of the large size used inside truck tires, and is reinforced with a rope around its center. A waterproof fabric bottom and a specially devised mount for the motor complete the pneumatic boat.