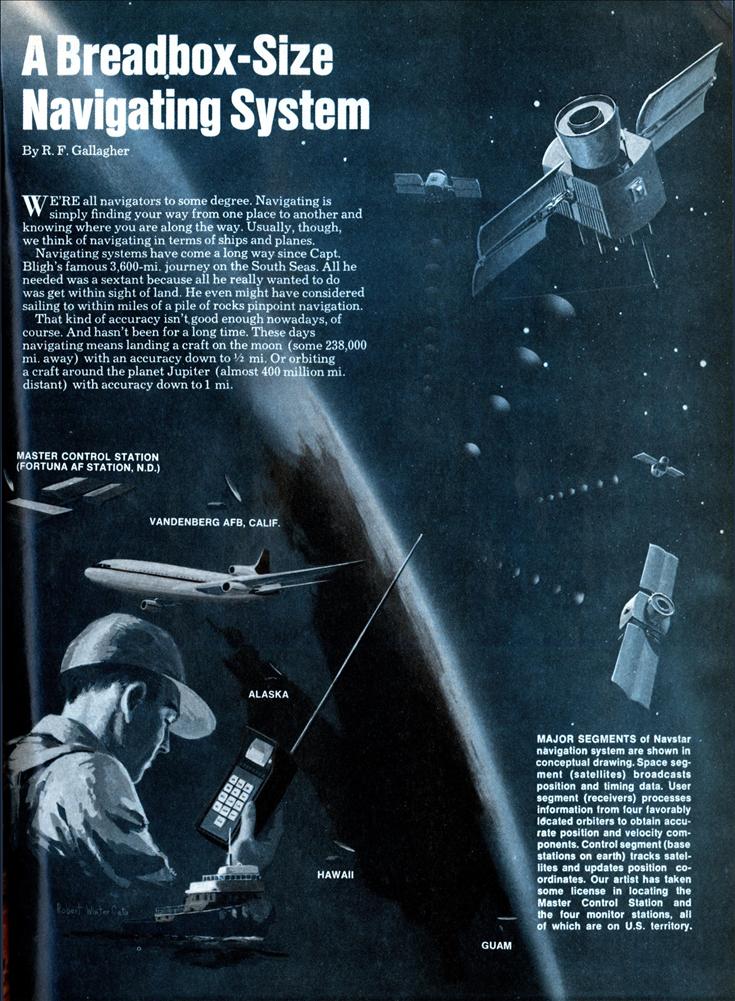 WE’RE all navigators to some degree. Navigating is simply rinding your way from one place to another and knowing where you are along the way. Usually, though, we think of navigating in terms of ships and planes.

Navigating systems have come a long way since Capt. Bligh’s famous 3,600-mi. journey on the South Seas. All he needed was a sextant because all he really wanted to do was get within sight of land. He even might have considered sailing to within miles of a pile of rocks pinpoint navigation.

That kind of accuracy isn’t good enough nowadays, of course. And hasn’t been for a long time. These days navigating means landing a craft on the moon (some 238,000 mi. away) with an accuracy down to 1/2 mi. Or orbiting a craft around the planet Jupiter (almost 400 million mi. distant) with accuracy down to 1 mi.

You may think that that kind of navigating precision has not much to do with workaday types with both feet on the ground. You may be proved wrong some years down the pike. For the Air Force’s Space and Missile Systems Organization (SAMSO) is now developing Navstar, a space-based radio navigation system—global in scope—that could provide precise navigation information by the late 1980s for users throughout the world. (A lightweight backpack model— which could be called breadbox size—has been built and is currently being tested for use by ground troops.)

The Global Positioning System (GPS) is a Dept. of Defense project, but the Air Force, Army, Navy and Marines, plus the Defense Mapping Agency, are involved. SAMSO is head honcho, or program manager.

Right now, there are four satellites orbiting the earth, the last of which was launched last December. All have been put up there by the famous Atlas family of rockets. When the project becomes fully operational, possibly in the late 1980s, the Navstar system will include 24 satellites, eight in each of three orbits. This truly artificial galaxy will circle the globe every 24 hrs., all the while beaming continuous navigation signals to earth.

SAMSO is currently working with the Federal Aviation Agency to determine the practicality and long-range use of the Navstar system in aircraft crash avoidance. Present aircraft applications are in strategic defense, with Navstar affording an all-weather, day or night global strike capability.

Another function of the system is to provide navigational fixes for missile and attack submarines which must broach the surface for as short a time as possible to avoid detection. The data received permits the craft to navigate through minefields and to pinpoint location relative to charted buoys, shoals and reefs.

The fully operational Navstar system works like this: All 24 satellites transmit individually coded, 30-sec. navigation messages simultaneously, beginning at the same time and in the same format.

The first 18 sec. contain celestial and clock data. The next segment of 6 sec. is reserved for additional messages. The final 6-sec. portion contains a course almanac for all satellites in the network.

Here on earth, the signals are received by user sets, which can be integrated with aircraft and ships or hand-held by land-based personnel.

The receiver locks onto signals from four favorably located satellites. It then processes the signals and, depending on the information sought, the user can determine his position to within tens of feet, velocity to within a fraction of a mile per hour and the time to within a millionth of a second. This information becomes available quickly with the push of a few buttons—no more difficult than punching numbers on a calculator.

The system consists of three major interlocking segments. The space segment (the orbiting satellites) broadcasts superaccurate position coordinates and timing information. The user segment (receivers) processes this information from the four best-located satellites to obtain accurate position and velocity components. The control segment (base stations on earth) tracks the satellites and continually updates their position coordinates.

The satellite itself weighs 1,673 lbs. and measures just 17-1/2 ft. from tip to tip. And, of course, its more than 33,000 parts are a wonderment of sophisticated engineering. For example, the atomic clocks used are so accurate that they gain or lose only 1 sec. in 30,000 yrs.!