A CHAMPION GIVES YOU A LESSON WITH THE LARIAT (Jun, 1942) 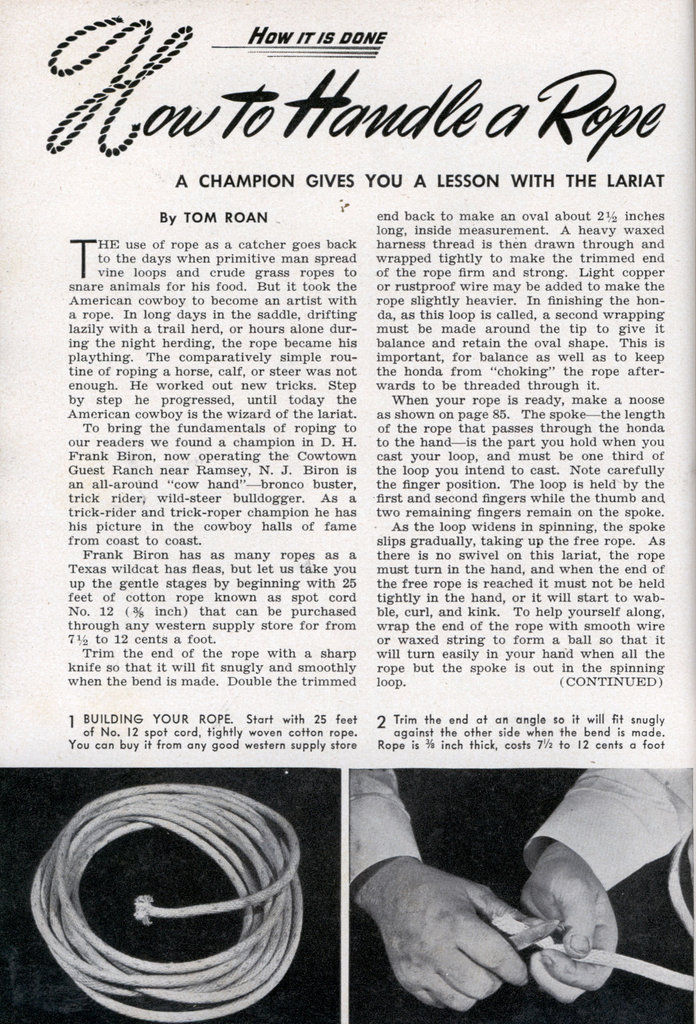 How to Handle a Rope

A CHAMPION GIVES YOU A LESSON WITH THE LARIAT

THE use of rope as a catcher goes back to the days when primitive man spread vine loops and crude grass ropes to snare animals for his food. But it took the American cowboy to become an artist with a rope. In long days in the saddle, drifting lazily with a trail herd, or hours alone during the night herding, the rope became his plaything. The comparatively simple routine of roping a horse, calf, or steer was not enough. He worked out new tricks. Step by step he progressed, until today the American cowboy is the wizard of the lariat.

To bring the fundamentals of roping to our readers we found a champion in D. H. Frank Biron, now operating the Cowtown Guest Ranch near Ramsey, N. J. Biron is an all-around “cow hand”â€”bronco buster, trick rider, wild-steer bulldogger. As a trick-rider and trick-roper champion he has his picture in the cowboy halls of fame from coast to coast.

Frank Biron has as many ropes as a Texas wildcat has fleas, but let us take you up the gentle stages by beginning with 25 feet of cotton rope known as spot cord No. 12 (3/8 inch) that can be purchased through any western supply store for from 7-1/2 to 12 cents a foot.

Trim the end of the rope with a sharp knife so that it will fit snugly and smoothly when the bend is made. Double the trimmed end back to make an oval about 2-1/2 inches long, inside measurement. A heavy waxed harness thread is then drawn through and wrapped tightly to make the trimmed end of the rope firm and strong. Light copper or rustproof wire may be added to make the rope slightly heavier. In finishing the non-da, as this loop is called, a second wrapping must be made around the tip to give it balance and retain the oval shape. This is important, for balance as well as to keep the honda from “choking” the rope afterwards to be threaded through it.

When your rope is ready, make a noose as shown on page 85. The spokeâ€”the length of the rope that passes through the honda to the handâ€”is the part you hold when you cast your loop, and must be one third of the loop you intend to cast. Note carefully the finger position. The loop is held by the first and second fingers while the thumb and. two remaining fingers remain on the spoke.

As the loop widens in spinning, the spoke slips gradually, taking up the free rope. As there is no swivel on this lariat, the rope must turn in the hand, and when the end of the free rope is reached it must not be held tightly in the hand, or it will start to wabble, curl, and kink. To help yourself along, wrap the end of the rope with smooth wire or waxed string to form a ball so that it will turn easily in your hand when all the rope but the spoke is out in the spinning loop.

Patience is required now. Make a ring-like movement of the rope as if trying to spread it on the ground in front of you. Don’t jerk it. Don’t fling it. Too much speed is the fault of every beginner. You may not make it the first time. The rope will probably come flapping back against your legs. Making certain all the kinks are out of the rope, start with the thought that you are about to swing the loop around a low tub in front of you. As you swing, you let go the loop. The right hand, still holding the spoke, of course, follows the loop around and around. Don’t try to keep it circling as wide as the loop. You will find after a few attempts that it is a rotary motion of the wrist that keeps the rope going. Once the loop is established and in a spin, gradually increase the speed of the right hand to widen it. Because it is more natural for the right hand to swing counterclockwise, many people find it easier to start their first loops in that direction. Start the way you find your hand most supple.

Your next step is to get your loop large enough to step into it. Watch your spoke. See that the loop is spinning evenly. As the spoke comes to you, give your hand a slightly harder twirl. As the spoke passes your feet, step into the loop with the right hand going up above your head to keep up the rotating movement of the wrist.

When you have gone this far you are on your way. Some of the fear of the loop is gone. You are not afraid it is going haywire each time you swing a loop in front of you.

You are at a point now where you can begin to overcome the twisting of the rope and the kinks that come with it. Learn to play small loops back and forth in front of you. Say, for instance, a swing of the small loop to the left to where it goes up and almost stops. As it comes back reverse the spin. This takes away the twist and starts it in the other direction.

Once you have caught and mastered one of those tricks others come to you. You are now working in sequence, and you are on your way to the spectacular stunts shown on these pages.

As you advance, so must your rope. Maguey ropes made from the maguey plant in old Mexico are used for fancy horse roping, in contests where experts “call their shots” â€”meaning the foot they intend to catch. Small loops are used to catch the front feet, a hind foot, or the stirrup of the rider; large loops are employed to catch all four feet. Horses to be roped in such contests are always managed by good riders who know how to pull up to keep them from being burned by the rope.

But you’d better enjoy this kind of roping from the sidelines until you have mastered the rope-spinning tricks.