Popular Mechanics
Issue: Aug, 1951
Posted in: Cool, History
No Comments on A Clock for Eternity (Aug, 1951)

Article about an incredible clock designed and built by a Danish Locksmith that was supposed to be accurate for several millenia. In addition the clock was to provide a dozen different kinds of astronomical data such as the the phases of the moon, precession and the orbits of the planets (Pluto is absent, I don’t think it had been discovered when the design was started).

In 1991 it was noted that many of its measurements were wrong. An examination found that grime and corrosion had were the culprits and from 1995-97 the clock was dismantled and restored.

More information on the restoration here.

A very similar, but much more ambitious and technically complex project is currently being undertaken by the Long Now Foundation. Led by Danny Hillis (founder of Thinking Machines and general all round genius) they are attempting to build a clock that will run for 10,000 years. Check out the project page for more information. 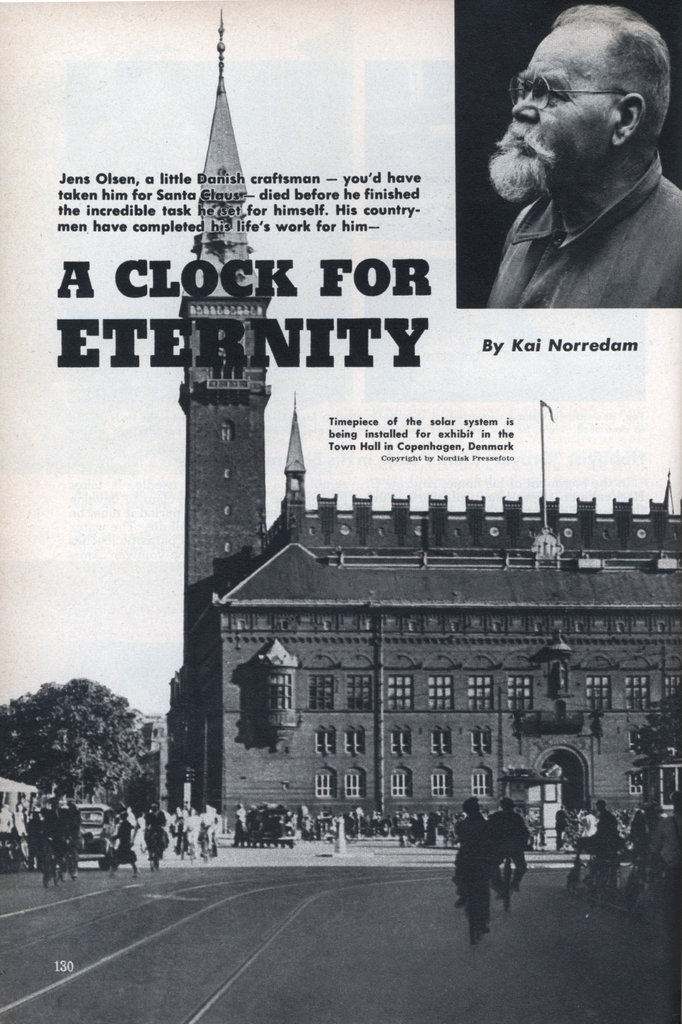 A Clock for Eternity

Jens Olsen, a little Danish craftsman â€” you’d have taken him for Santa Claus -â€” died before he finished the incredible task he set for himself. His countrymen have completed his life’s work for himâ€”

LATE THIS YEAR a new clock will start ticking away in the old Town Hall at Copenhagen, Denmark. It is not an ordinary clock, for this is a timepiece built for eternity, a mechanism that will keep an accurate record of the time throughout the solar system, a clock we expect to tick away for three or four thousand years.

The maze of gears and shafts in our clock is so accurate that the pointer showing the eclipses of the sun and moon makes one revolution in precisely 6798.36152 days!

The clock is a finer timepiece than even the famous astronomical clock at Strasbourg, according to engineers and astronomers who have studied it. It is the lifework of Jens Olsen, a locksmith’s apprentice who died shortly before the clock was finished.

Olsen was born nearly 80 years ago. When his journeyman’s probation as a locksmith was completed, he strapped a knapsack on his back and started wandering throughout Europe. In every town he studied the old clocks and read every book in the local library on the subject of timekeeping. He was determined to make the finest clock in history.

In 1902 Olsen returned to Denmark and, between odd jobs, worked on the plans for his masterpiece. For 30 years he toiled over drawings of the mechanism. Then in 1935, the drawings were completed and he already had constructed some of the clock’s thousands of intricate parts. An article in a scientific journal, in which he described the astronomical clock in detail, astonished the astronomists. Immediately a committee was set up to back the construction of the clock, and an excellent engineer appointed as an aid to Olsen.

For 16- years the work has gone forward on the clock. Not long ago Olsen died. But the important element of his work, the drawings which had been traced for a lifetime, remained. Now our clock is complete except for the details of mounting it.

Once it starts ticking away the centuries, here is what the face of the clock will tell:

4. The times when certain stars rise and set, and when they cross the meridian.

5. The precession, and the extent to which this influences the rising and setting of the stars.

6. The time when the sun passes the meridian; sunrise; sunset.

8. The geocentric longitudes of the moon and sun.

9. The longitude of the lunar nodal line and the time of future eclipses of the moon and sun.

10. The longitude of the lunar line of apsides (line coinciding with the axis of the moon’s orbit).

11. The varying distances of the great planets from the sun.

12. A fully automatic Gregorian calendar that, on every New Year’s Eve at 0.00 hours, calculates all the chronological elements of the calendar, such as: the cycle of the sun (a period of 28 years); the Roman indiction (a fiscal period of 15 years reckoned originally by the Romans); the golden number (after each period of 19 years, the new and full moons return on the same days of the month as before); the epact (the excess of solar over lunar year); the Sundayâ€”or Dominicalâ€”Letter (days of the month on which the Sundays fall during each year of the cycle); the weekdays and holidays of future years. 13. The year, the day of the week, the date, the month and the number of the day in the Julian period of 7980 years.

Several astronomical clocks have been constructed in the past. The finest is the clock in Strasbourg, justly famous throughout the world. It is far surpassed, however, by Jens Olsen’s clock in astronomical exactness. The calendar is much superior in the Danish clock, and what is of great importance to the observer, the astronomical phenomena are so clearly presented as to be readily seen and understood by everyone.

The clock is mounted on a green granite base and enclosed in a large glass case. The mechanism cannot stand the slightest vibration so it is necessary that the foundation go deep into the earth to the firm undersoil. Warm, dry air is let through the case, thereby creating slight pressure inside and preventing the entrance of dust.

The timepiece is made of 12 independent mechanisms; they are, however, mutually connected by axles or gearing, or by a steel band.

Just beneath the ordinary clock dials is a smaller dial which shows sidereal time in hours, minutes and seconds. Sidereal time â€”or stellar timeâ€”has an interesting explanation. It is brought about by the fact that, while the earth rotates 365 times about its own axis in relation to the sun during a mean year, it will, during the same period, rotate 366 times in relation to a fixed star. It follows that a sidereal day is 3 minutes 56.666 seconds shorter than a solar day. The hands showing sidereal time and mean time are driven by the same mechanism. They are connected by a transmission which consists of three pairs of wheels with different cogs, the sizes of which are calculated so exactly that during 300 years there will be a deviation of only 0.4 second in sidereal time.

Two special hands on the sun-and-moon mechanism have peculiar, bowed extensions which show the eclipses. Another dial shows the courses of the planets. The dial consists of eight movable rings, each of which represents a planet and rotates with a speed corresponding to that of the planet. The planet nearest the sun, Mercury, goes around its orbit in 88 days, whereas Neptune, which is farthest from the sun, takes no less than 165 years to go once around its orbit.

Jens Olsen completed a model of the clock and a new set of construction plans in 1943. The plans consisted of 46 sheets with 14 diagrams and 214 detail drawings, all done in six copies which, for the sake of safety, were kept in different places throughout the country. The clock cost $150,000 to build, a sum that was realized through contributions, small and large, from an immensely interested public which, through the press, also took an active part in the discussion of the clock’s site of erection and its artistic embellishments.

It is the clock of all Denmark, of all the solar system.