Or they could just move to California. It’s a pity. It wold have been nice to have a Buckminster Fuller designed stadium in Brooklyn. 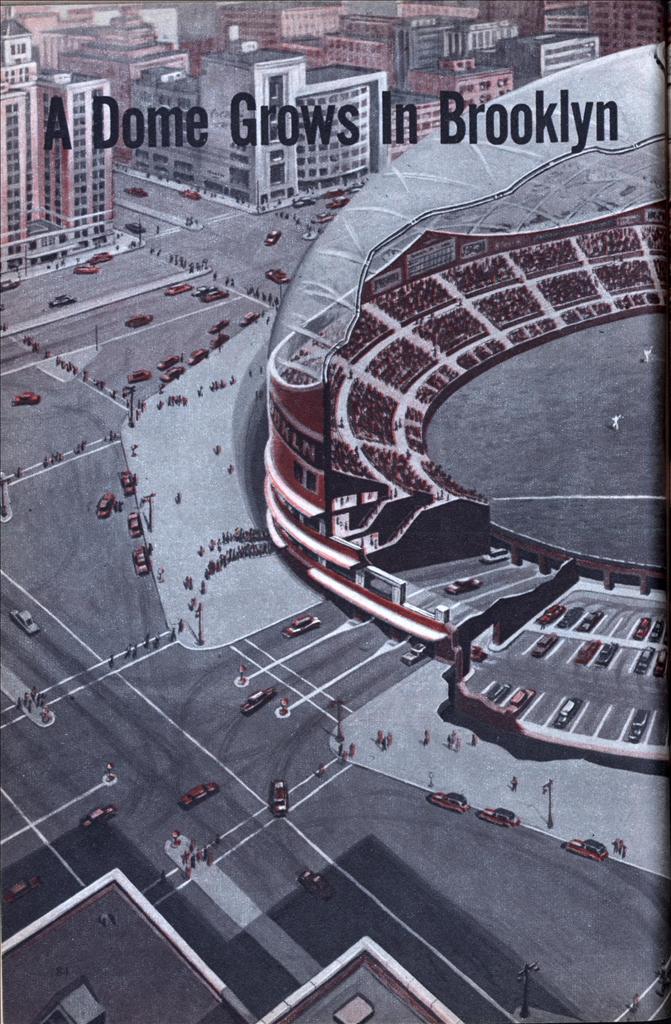 A Dome Grows in Brooklyn

The Dodgers’ home games may soon be played under this huge plastic bubble.

Mechanix Illustrated takes pride in being the first to show what the Brooklyn Dodgers’ new baseball park may look like—if the 20th century’s most daring architect gets his plan accepted. Buckminster Fuller has already earned the gratitude of the armed forces and the taxpaying public with his plastic igloos that can be helicopter-toted from air base to air base to serve as hangars, barracks, warehouses, administration buildings.

Fuller’s ball park plan is at present simply a proposal to employ his geodesic dome on a truly grand scale. The dome would be 300 feet high and 750 feet in diameter. How many fans it would hold has not yet been figured, but a smaller dome design submitted by architect Theodore Kleinsasser would seat 55,000—some 23,000 more than Ebbetts Field, the Brooks’ hallowed but decaying home park. Kleinsasser’s design is more detailed than Fuller’s and includes such novelties as a small sightseeing tramway over the top of the dome.

The dome design makes feasible the demand for a ball park big enough to hold the enormous Dodger following. It would also be an all-weather, year-round sports palace capable of pulling in big money as a showplace for every kind of sporting event and exposition. The New York State legislature has created a $30,000,000 authority empowered to create such a center and the dome design helped convince the lawmakers that it could be made to pay its own way. Mere Dodger sentiment could not have done that.

Mi’s drawing of the dome as it might look on completion includes details that originated in the MI office—details that in our opinion argue strongly in favor of adopting the basic Fuller design. The numerous entrances, corridors, escalators and other facilities are MI notions. At the top of the dome a small extension houses the air venting arrangements and the shadowless lighting fixtures that will light the field only, leaving the stands in comparative darkness. A huge underground car park under the stands and field leaves only a small central area for heating and air conditioning plants.

Four automobile entrances open off intersecting streets and are provided with three-lane ramps to the level below. Circular roads surround the main parking sections with radial access drives to the individual rows of car stalls. These are separated by sidewalks leading to the promenade above. This “concourse runs completely around the building at street level, with escalator bridges over the automobile entries leading to the grandstands above. The inner wall of the promenade is lined with shops, restaurants and other facilities whose rentals would help defray the building’s maintenance costs. A 24-hour parking service, operating independently of scheduled sporting events, provides another steady source of income.

Using the authorized 500-acre plot to the best advantage, Mi’s arena building is set in the center of a four square block area. This placement permits generous loading and unloading space for buses and taxi-cabs without interfering with the flow of through traffic around the sides of the square. Numerous safety islands and cross-walks lead to extra wide sidewalk areas were ticket lines form. Subway and train connections emerge inside the building’s promenade. (The site of the dome will adjoin the Long Island Railroad’s Brooklyn Terminal.) The whole project is laid out to handle the maximum number of people safely and to facilitate the flow of vehicular traffic peaks that sport centers are bound to generate.

The Dodger Dome would certainly become an object of pride in Brooklyn. It might even rival the borough’s ball team in public esteem. In any case, no club could be more deserving of such a fabulous park than that Fabulous Flock.