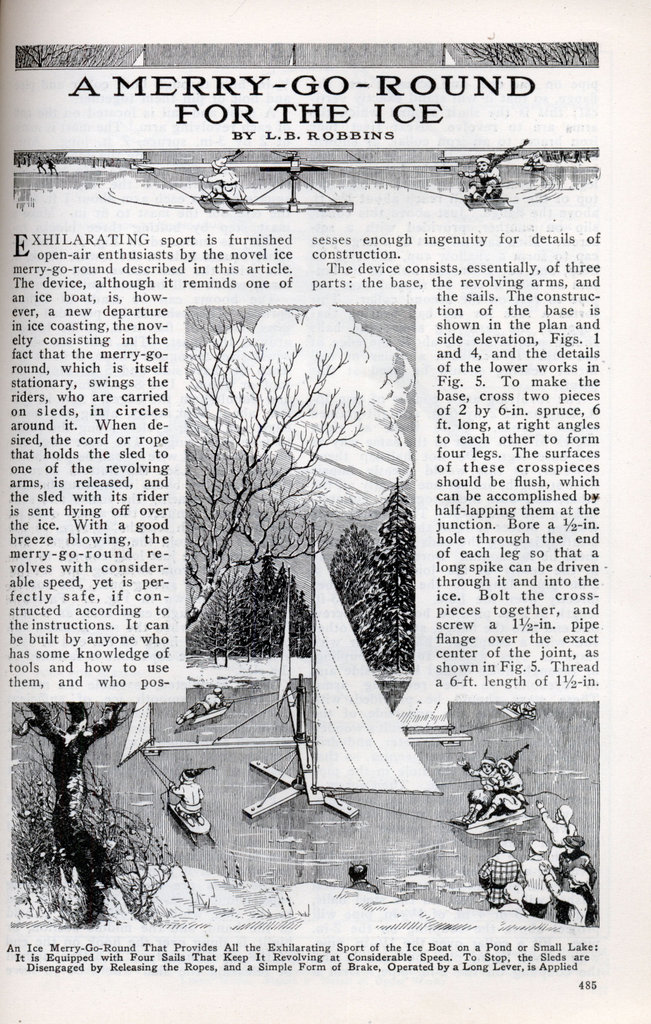 A MERRY-GO-ROUND FOR THE ICE

EXHILARATING sport is furnished open-air enthusiasts by the novel ice merry-go-round described in this article. The device, although it reminds one of an ice boat, is, however, a new departure in ice coasting, the novelty consisting in the fact that the merry-go-round, which is itself stationary, swings the riders, who are carried on sleds, in circles around it. When desired, the cord or rope that holds the sled to one of the revolving arms, is released, and the sled with its rider is sent flying off over the ice. With a good breeze blowing, the merry-go-round revolves with considerable speed, yet is perfectly safe, if constructed according to the instructions. It can be built by anyone who has some knowledge of tools and how to use them, and who possesses enough ingenuity for details of construction.

The device consists, essentially, of three parts: the base, the revolving arms, and the sails. The construction of the base is shown in the plan and side elevation, Figs. 1 and 4, and the details of the lower works in Fig. 5. To make the base, cross two pieces of 2 by 6-in. spruce, 6 ft. long, at right angles to each other to form four legs. The surfaces of these crosspieces should be flush, which can be accomplished by half-lapping them at the junction. Bore a 1/2-in. hole through the end of each leg so that a long spike can be driven -through it and into the ice. Bolt the cross-pieces together, and screw a 1-1/2-in. pipe flange over the exact center of the joint, as shown in Fig. 5. Thread a 6-ft. length of 1-1/2-in. pipe on one end, and screw it into the flange, so that it will stand exactly vertical; this is the shaft around which the arms are to revolve. Next rivet four iron braces to an iron collar, as shown. Slip the collar over the 1-1/2-in. pipe, and bolt the lower end of the braces to the legs, the bracing being fitted so that the top of the collar will reach about 1-1/2 ft. above the flange. Just above this collar, slip on another, provided with a set-screw. Then saw off part of a large pipe cap to form a shallow cup, about 3/4 in. deep, and cut a circular hole in its bottom so that it can be slipped over the pipe to rest on the second collar. This forms a race for the ball bearing that supports the revolving arms; the balls should project a trifle above the edge of the cup. If available, a roller or ball thrust bearing should be used at this point.

The revolving arms consist of two 16-ft. lengths of 2 by 6-in. straight-grained spruce planks. Cross them at right angles to each other in the same way as the base legs. Do not half-lap them, however, as this would greatly impair their strength, but set one directly on the other, and bolt them together, countersinking the bolt heads. Then fasten four wooden braces around the center as indicated, lapping the ends so as to make them lie horizontal. Bore a 1-3/4-in. hole in the center of the joint, and bolt a 2-in. pipe flange to the upper timber directly over the hole. Thread a 3-ft. length of 2-in. pipe on both ends, screw one end into the flange, and fit the other end with a coupling. Fasten four wire stays to eyes welded to the coupling, or through holes drilled in the side and to eyebolts on the revolving arms. These stays should be provided with-turnbuckles. On the underside of the joint of the revolving arms, bolt a wooden disk, about 18 in. in diameter, and drill a 1-3/4-in. hole in the exact center, so that it will line up with the hole in the pipe flange on the other side. Then screw a large steel washer, about 6 in. in diameter, with a 1-3/4-in. hole in the center, to the wooden disk. This washer rides on the steel balls in the race.

A mast and sail is located on the end of each revolving arm. The mast is made of 2 by 3-in. spruce, 7 ft. long. After rounding or chamfering the edges, square off the end and taper it; also taper the whole mast toward the top. Saw a square hole in each arm about 1 ft. from the end, for the mast to fit in. Make a mast step by bolting three blocks together, as indicated in Fig. 3. Cut another square hole in the lowest block, in line with the one above, and step the mast, which will be held quite securely.

The booms can be made of lighter spruce. They should be provided with jaws, made of flat iron, to fit loosely around the mast. The sails are all of equal size, triangular shape, 6 ft. at the leach or mast side and 5 ft. along the foot or boom. Use 8-oz. white ducking and double-hem the edges. Sew in eyelets, about 6 in. apart, along the boom edge, and larger eyelets along the leach, to take mast rings. The mast rings can be made of stiff wire or can be purchased ready-made. Lace the bottom edge of the sail to the boom with stout braided cord. After placing the masts and sails in position, connect the outer ends of the booms, with lengths of rope, to the eyebolts that hold the wire stays. The ropes should be just long enough to prevent the sail from swinging out too far when gybed, or swung out. The correct position is shown in Fig. 1. Fasten a long bolt through each arm, as a stop for the boom when the sail is filled, and provide a large hook on the end of each arm to hold the rope that is fastened to the sled.

When completed, assemble the merry-go-round on smooth ice of sufficient thickness. Set the base on the ice and drive spikes down full length. Additional strength and stability will be obtained by heaping snow around the spikes and legs, splashing water over it, and allowing it to freeze.

Figure 1 indicates clearly how the merry-go-round works, the various positions of the sails being shown. Two of the sails are always catching the wind; one is completely filled just before the one ahead of it is gybed.

The sleds are equipped with strong rope, about 20 ft. long; one end is tied to the sled, while the other end is held in the hand, and the middle section, or bight, is slung over the hook on the end of the revolving arm. A better method of releasing the sled would be to have the sled ropes fastened to the arm, and attached to a screweye in the front of the sled by a slip knot, firmly tied, or by one or two turns around a hook. Then, when the rope is released, and the sled flies off, there is no danger of its being overturned by a long, hanging rope getting under the runners.

It is necessary to provide some kind of brake for stopping, especially when a strong breeze blows. A practical way to do this is to provide means of raising the whole revolving assembly, after all the sleds have been released, so that the coupling on the 2-in. pipe bears tightly against the upper collar on the 1-1/2-in. pipe. This can be done in a number of ways, and one will quickly suggest itself to the builder.

By raising the booms of all four sails and lashing them to the masts, the merry-go-round can be kept at rest.