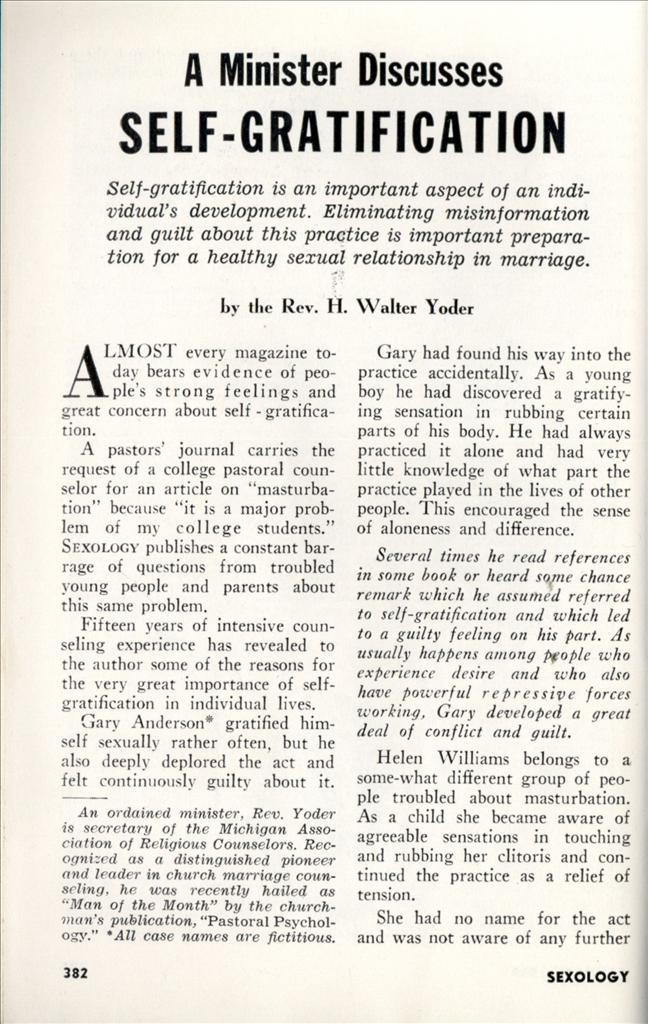 Self-gratification is an important aspect of an individual’s development. Eliminating misinformation and guilt about this practice is important preparation for a healthy sexual relationship in marriage.

by the Rev. H. Walter Yoder

An ordained minister, Rev. Yoder is secretary of the Michigan Association of Religious Counselors. Recognized as a distinguished pioneer and leader in church marriage counseling, he was recently hailed as “Man of the Month” by the churchman’s publication, “Pastoral Psychology.” *All case names are fictitious.

ALMOST every magazine today bears evidence of people’s strong feelings and great concern about self – gratification.

Fifteen years of intensive counseling experience has revealed to the author some of the reasons for the very ^reat importance of self-gratification in individual lives.

Gary Anderson* gratified himself sexually rather often, but he also deeply deplored the act and felt continuously guilty about it.

Gary had found his way into the practice accidentally. As a young boy he had discovered a gratifying sensation in rubbing certain parts of his body. He had always practiced it alone and had very little knowledge of what part the practice played in the lives of other people. This encouraged the sense of aloneness and difference.

Several times he read references in some book or heard some chance remark which he assumed referred to self-gratification and which led to a guilty feeling on his part. As usually happens among people who experience desire and who also have powerful repressive forces working, Gary developed a great deal of conflict and guilt.

She had no name for the act and was not aware of any further significance in it. For her it was simply soothing and provided relief at times when she was tired or tense.

One day, however, she was caught in the act by an older sister whom she greatly admired. The older sister expressed great horror and hostility. Her mother was called and her father informed and she was given a severe scolding.

The hostile looks on the faces she loved and the distasteful terms used to label her acts made her feel unclean. A great deal of energy in her life is now used in repressing her desire for self-gratification. The tension formerly released in this way often turns into resentment and angry explosions.

Still another kind of experience is illustrated in the case of Harley Smith. Harley was initiated into the practice at an early age among a gang of boys. Curiosity then led him to experiment himself.

This learning of the practice took place in a group and therefore did not seem to him to be unusual or different. However, Harley soon heard the practice of self – gratification described as a “childish” one. Some of the reading and instruction which he had made him feel that continuing the habit is a sign that he is “immature.”

As a result he is torn between his ambition to grow into a fully rounded and mature adult and his continuing desires for this form of sexual expression.

For Bill Brown the practice has still a different kind of meaning. He grew up in a family which made a very sharp distinction between the premarital and marital status. All sexual feelings and expressions were to be accepted in the married state, but great restriction was placed upon any acknowledgment of such desires or feelings or acts before marriage.

As he grew up and began to experience sexual feeling and desire, it was channeled into his feeling that any form of sex expression must come only in marriage. Even though he is too young to enter into marriage, he feels that he must get married immediately and seeks to find some girl who will marry him.

Not finding other avenues of satisfying release of these feelings, she has been led into a life of promiscuity. However, she is not personally ready for the experience of intercourse and inevitably finds it dissatisfying and frustrating. Instead of examining the reason for this she plunges on from affair to affair.

To each of these cases the practice of self-gratification has had a different meaning. However, they all share something in common. Each of them feels the impact of the sexual drive toward creation and growth. Each of them also has become snagged, though in different ways, in his sexual development.

In all cases, troubled feelings about self-gratification were an important factor in this snag in their growth. Whether because of lack of information, hostile and resentful attitudes, condemnation of the act as “immature,” or whatever the cause may be, a very real problem has occurred and it may involve a good deal of guilt and suffering on the part of the individual.

When fear, hostility, hurt, and embarrassment are linked with the feeling of exposure and vulnerability that comes with the growth of new sensitive feelings—particularly in the area of sex—there is a temptation to “cover over” or to neglect working through the problem.

The mature and responsible person, however, when he begins to experience the awakening of sexual desires, will study the available knowledge about sexual growth and development. When questions and conflicts arise he will seek out the help of a counselor so that he can find the channel and the means of sexual expression which will be helpful to himself and harmful to no one.

He will not want to approach the sexual relationship with another with the idea of dumping upon another his sexual conflicts. Rather he will try to prepare himself so that he can not only handle his own life well but also enter into the added satisfactions of marital relationships as a privilege and as a bonus in life.

Leaders in the field feel also that it is essential to make clear that the sexual drive is an important part of a larger creative drive which can enhance and enrich life.

One significant channel of expression during the course of an individual’s sexual development may be the practice of self-gratification. It is important then for that person to understand its meaning and how it fits into his creative growth. All feelings of fear and guilt and anxiety and hostility connected with the act of self-relief must be studied and resolved.