I don’t know the current status of trademark law, but I don’t think you get simultaneous trademark registration among many countries. I think you have to register in each. This does remind me a lot of domain name squatting. 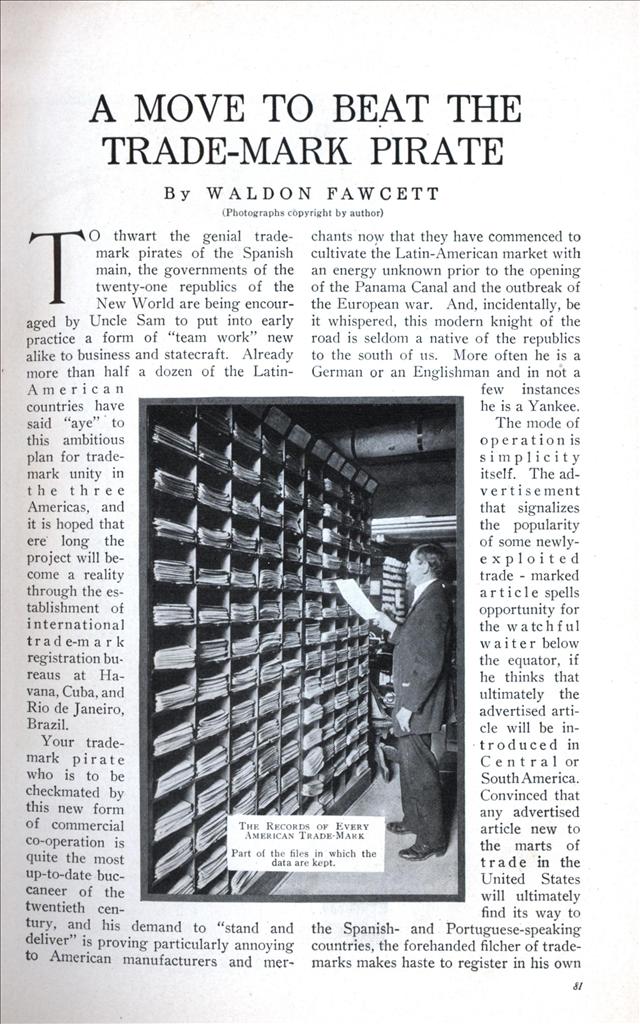 A MOVE TO BEAT THE TRADE-MARK PIRATE

TO thwart the genial trademark pirates of the Spanish main, the governments of the twenty-one republics of the New World are being encouraged by Uncle Sam to put into early practice a form of “team work” new alike to business and statecraft. Already more than half a dozen of the Latin-American countries have said “aye” to this ambitious plan for trademark unity in the three Americas, and it is hoped that ere long the project will become a reality through the establishment of international trade-mark registration bureaus at Havana, Cuba, and Rio de Janeiro, Brazil.

Your trademark pirate who is to be checkmated by this new form of commercial co-operation is quite the most up-to-date buccaneer of the twentieth century, and his demand to “stand and deliver” is proving particularly annoying to American manufacturers and mer- chants now that they have commenced to cultivate the Latin-American market with an energy unknown prior to the opening of the Panama Canal and the outbreak of the European war. And, incidentally, be it whispered, this modern knight of the road is seldom a native of the republics to the south of us. More often he is a German or an Englishman and in not a few instances he is a Yankee.

The mode of operation is simplicity itself. The advertisement that signalizes the popularity of some newly-exploited trade – marked article spells opportunity for the watchful waiter below the equator, if he thinks that ultimately the advertised article will be introduced in Central or South America. Convinced that any advertised article new to the marts of trade in the United States will ultimately find its way to the Spanish- and Portuguese-speaking countries, the forehanded filcher of trademarks makes haste to register in his own name the particularly promising trade-mark that identifies the goods in question. He does this by virtue of an investment of from twenty-five to fifty dollars, for in the average Latin-American country trade-mark registration and all the rights of exclusive possession are granted to the first applicant regardless of whether he actu- ally uses the mark on goods—the first requisite of trade-mark registration in the United States.

Well, with a trade-mark registration certificate tucked away in his inside pocket the trade-mark promoter has only to sit tight until the unsuspecting American manufacturer sells goods in Central or South America. Then the manufacturer is confronted with the claims of the pirate, who calmly informs him that “arrangements” must be made before the American can make any use of his own trademark. The American could fight, but legal controversies are particularly time-consuming and costly in Latin America, and nine times out of ten when the Yankee, impatient to develop his market, finds that he can settle for $1,500 or $2,000 he does so.

But never again, if the Pan-American countries ratify a Convention which was framed at the Pan-American Conference. When central trade-mark offices are established—at Havana for Central and North America and the West Indies and at Rio for South America—the sum of fifty dollars in gold will secure the simultaneous registration in all the countries of a trade-mark registered in any of the signatory countries. Questions of priority are settled in accordance with the date of deposit in the country where the first application was made and better yet it will be rendered possible internationally just as it now is here in the United States for a firm or individual to secure an annulment when proper.