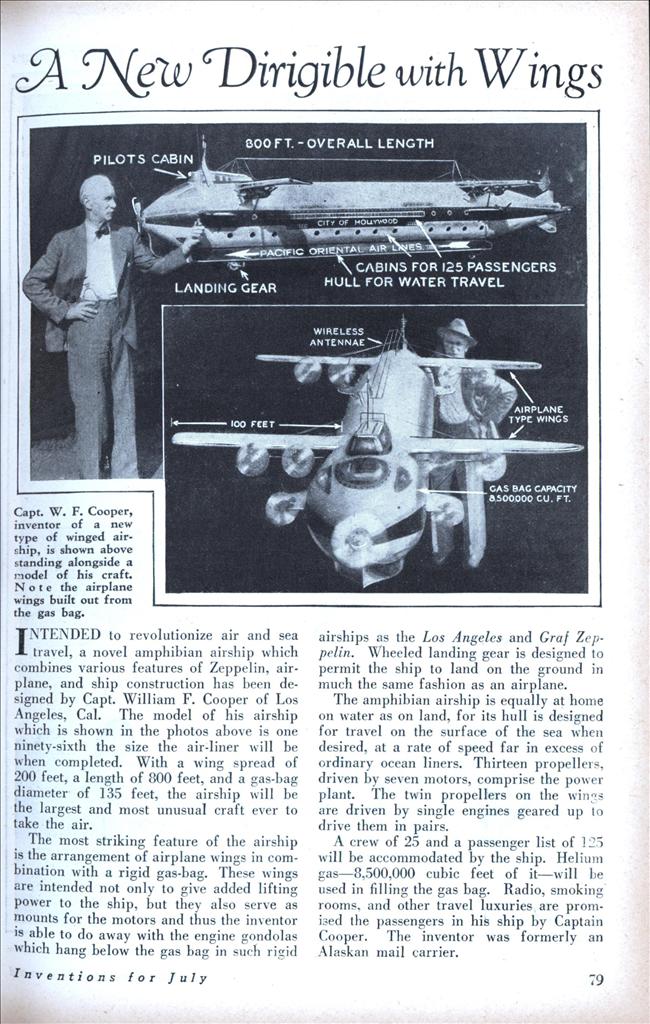 A New Dirigible with Wings

INTENDED to revolutionize air and sea travel, a novel amphibian airship which combines various features of Zeppelin, airplane, and ship construction has been designed by Capt. William F. Cooper of Los Angeles, Cal. The model of his airship which is shown in the photos above is one ninety-sixth the size the air-liner will be when completed. With a wing spread of 200 feet, a length of 800 feet, and a gas-bag diameter of 135 feet, the airship will be the largest and most unusual craft ever to take the air.

The most striking feature of the airship is the arrangement of airplane wings in combination with a rigid gas-bag. These wings are intended not only to give added lifting power to the ship, but they also serve as mounts for the motors and thus the inventor is able to do away with the engine gondolas which hang below the gas bag in such rigid airships as the Los Angeles and Graf Zeppelin. Wheeled landing gear is designed to permit the ship to land on the ground in much the same fashion as an airplane.

The amphibian airship is equally at home on water as on land, for its hull is designed for travel on the surface of the sea when desired, at a rate of speed far in excess of ordinary ocean liners. Thirteen propellers, driven by seven motors, comprise the power plant. The twin propellers on the wings are driven by single engines geared up to drive them in pairs.

A crew of 25 and a passenger list of 125 will be accommodated by the ship. Helium gas—8,500,000 cubic feet of it—will be used in filling the gas bag. Radio, smoking rooms, and other travel luxuries are promised the passengers in his ship by Captain Cooper. The inventor was formerly an Alaskan mail carrier.