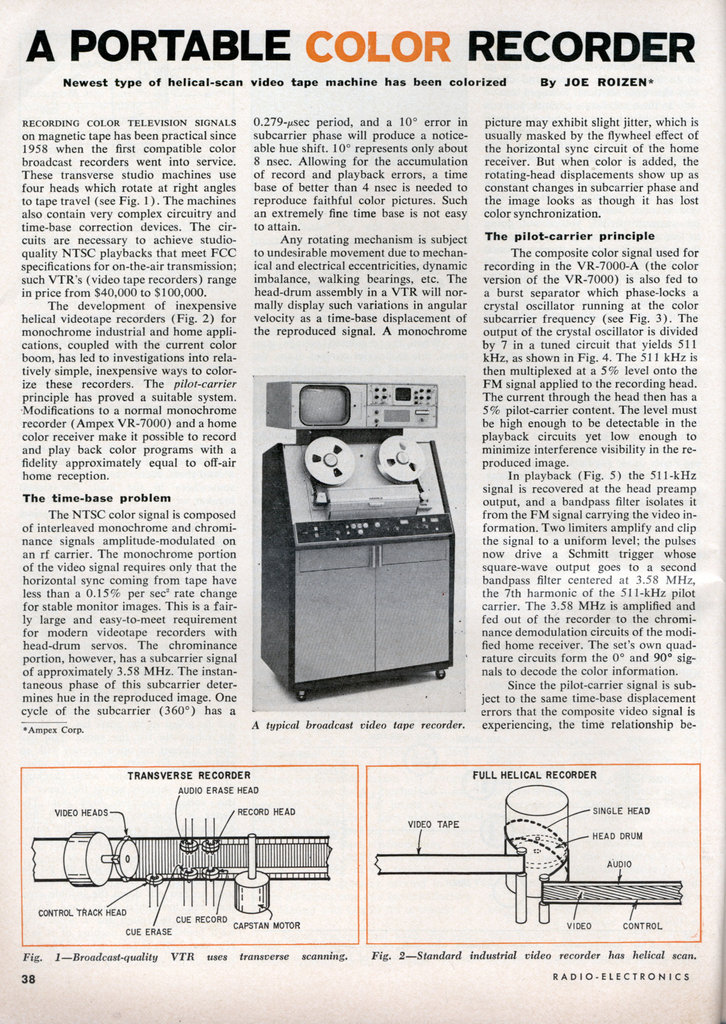 Newest type of helical-scan video tape machine has been colorized

RECORDING COLOR TELEVISION SIGNALS on magnetic tape has been practical since 1958 when the first compatible color broadcast recorders went into service. These transverse studio machines use four heads which rotate at right angles to tape travel (see Fig. 1). The machines also contain very complex circuitry and time-base correction devices. The circuits are necessary to achieve studio-quality NTSC playbacks that meet FCC specifications for on-the-air transmission; such VTR’s (video tape recorders) range in price from $40,000 to $100,000.

The development of inexpensive helical videotape recorders (Fig. 2) for monochrome industrial and home applications, coupled with the current color boom, has led to investigations into relatively simple, inexpensive ways to colorize these recorders. The pilot-carrier principle has proved a suitable system. Modifications to a normal monochrome recorder (Ampex VR-7000) and a home color receiver make it possible to record and play back color programs with a fidelity approximately equal to off-air home reception.

The time-base problem The NTSC color signal is composed of interleaved monochrome and chrominance signals amplitude-modulated on an rf carrier. The monochrome portion of the video signal requires only that the horizontal sync coming from tape have less than a 0.15% per sec2 rate change for stable monitor images. This is a fairly large and easy-to-meet requirement for modern videotape recorders with head-drum servos. The chrominance portion, however, has a subcarrier signal of approximately 3.58 MHz. The instantaneous phase of this subcarrier determines hue in the reproduced image. One cycle of the subcarrier (360°) has a 0.279-usec period, and a 10° error in subcarrier phase will produce a noticeable hue shift. 10° represents only about 8 nsec. Allowing for the accumulation of record and playback errors, a time base of better than 4 nsec is needed to reproduce faithful color pictures. Such an extremely fine time base is not easy to attain.

Any rotating mechanism is subject to undesirable movement due to mechanical and electrical eccentricities, dynamic imbalance, walking bearings, etc. The head-drum assembly in a VTR will normally display such variations in angular velocity as a time-base displacement of the reproduced signal. A monochrome picture may exhibit slight jitter, which is usually masked by the flywheel effect of the horizontal sync circuit of the home receiver. But when color is added, the rotating-head displacements show up as constant changes in subcarrier phase and the image looks as though it has lost color synchronization.

The pilot-carrier principle The composite color signal used for recording in the VR-7000-A (the color version of the VR-7000) is also fed to a burst separator which phase-locks a crystal oscillator running at the color subcarrier frequency (see Fig. 3). The output of the crystal oscillator is divided by 7 in a tuned circuit that yields 511 kHz, as shown in Fig. 4. The 511 kHz is then multiplexed at a 5% level onto the FM signal applied to the recording head. The current through the head then has a 5% pilot-carrier content. The level must be high enough to be detectable in the playback circuits yet low enough to minimize interference visibility in the reproduced image.

In playback (Fig. 5) the 511-kHz signal is recovered at the head preamp output, and a bandpass filter isolates it from the FM signal carrying the video information. Two limiters amplify and clip the signal to a uniform level; the pulses now drive a Schmitt trigger whose square-wave output goes to a second bandpass filter centered at 3.58 MHz, the 7th harmonic of the 511-kHz pilot carrier. The 3.58 MHz is amplified and fed out of the recorder to the chrominance demodulation circuits of the modified home receiver. The set’s own quadrature circuits form the 0° and 90° signals to decode the color information.

Since the pilot-carrier signal is subject to the same time-base displacement errors that the composite video signal is experiencing, the time relationship be- tween the pilot carrier and the desired signal remains constant. Hence the color signal can be decoded with reasonable time-base accuracy. The local oscillator in the color receiver is temporarily deactivated during VTR playback.

Recorder operation The signal system of the VR-7000-A (Fig. 6) must be capable of handling a bandwidth of at least 4.2 MHz to not attenuate the color sidebands. To eliminate unwanted noise, spurious high-frequency signals, etc., the input is filtered by a phase-linear 4.5-MHz low-pass filter network.

A fast-switching multivibrator-type modulator converts the video signal to FM. The carrier and deviation frequencies are somewhat elevated from their monochrome counterparts to minimize intermodulation effects between the FM signals and the high-energy color sub-carrier (Fig. 7). The modulator operates between 5.5 MHz at sync tip to 6.6 MHz at peak white. A rising pre-emphasis going up to 14 dB at the color sub-carrier improves signal-to-noise ratio and differential gain and phase. The FM signal goes to a head-driver amplifier which provides a constant-current source to the recording head up to 15 MHz. A rotating transformer with an 8-to-l ratio transfers the amplifier output to the transducer. A 50-microinch head gap is employed.

In playback (Fig. 8) a low-impedance preamp gives a flat frequency response. Aperture correction and equalization are applied to the FM signal before 50 dB of shunt limiters eliminate variations in signal amplitudes.

The output of the limiter is a constant-amplitude FM signal. A pulse-count detector and a 4.2-MHz phase-linear low-pass filter convert the signal back to video and remove residual carrier and deviation components. The output amplifier feeds two 75-ohm outputs, and the monitor (receiver) must be “jeeped” (rf and i.f. stages bypassed) to provide direct access to the video circuits.

Further development of a heterodyne signal-processing system will eliminate the need for modifying the home receiver. At that time it will be possible to modulate the composite video signal on a carrier and feed it into the set through the antenna terminals on an unused channel.

A color-kill circuit in the VR-7000-A detects the presence of bursts on the input signal and activates the pilot carrier in the record mode. If no burst is present, the pilot carrier is shut off so that the recording will not contain the 511-kHz signal. Under certain background conditions, faint vertical lines can be seen in the playback image due to interference from the pilot carrier. The level, however, is not high enough to be objectionable and with normal image conditions, is not noticeable.

The colorized VR-7000-A produces acceptable color pictures for most non-broadcast uses, such as educational, industrial and home applications.