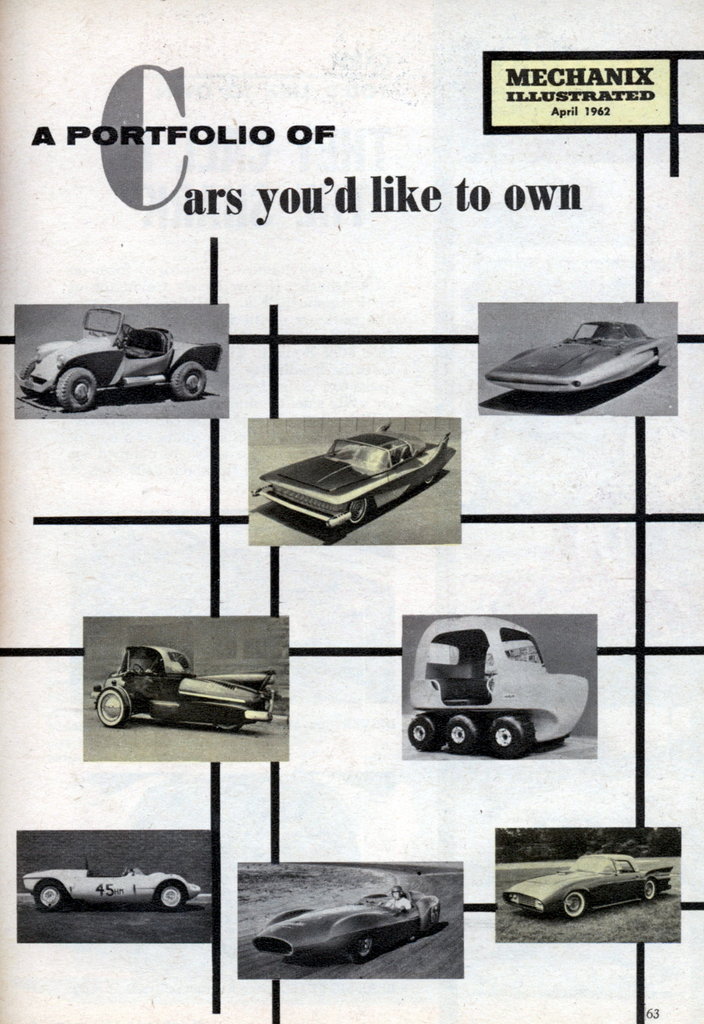 The Blazer has an air-cooled Corvair engine mounted up front. This sturdy 80-hp mill will not freeze up or boil over and has proved itself extremely resistant to dust, sand and foreign matter. When the going gets rugged you shift to four-wheel drive; when it gets ruggeder you switch the three-speed transmission into low range.

The weird glass fiber body makes a lot of sense when you get the reasoning behind it. The flaring fenders resist the efforts of mud to clog up the driving wheels and the raked hood lets the pilot see where his front wheels are. The wheels, incidentally, are designed so that four more can be clamped onto them for additional traction. All four are independently sprung with Chrysler torsion bars and modified Chrysler lower control arms. Ground clearance is adjustable from seven to 13 inches. Disc brakes allow the Blazer to ford streams without losing the power to stop. When the 146-inch, one-ton buggy comes off the production lineâ€”production plans have not yet been setâ€”it should cost around $3,300 with four-wheel drive. â€”Wayne Thorns

ANDREW DiDIA makes his money designing men’s clothes and spends it designing and building cars. His DiDia 150 is the 43-year-old Californian’s latest masterpiece. Final construction costs of this land yacht magnifique topped $93,000. The 219-inch aluminum body is mounted on a unitized alloy tubular frame. A modified 407-hp Cadillac engine can flay the car down a straightaway at 140 mph. Panels in the engine compartment are all stainless steel or chrome-plated brass. Other highlights include $7,000 worth of body trim and a hand-rubbed 30-coat paint jobâ€”rustic pearl and diamond dust! â€¢

ONE of the sights of Cheyenne, Wyo. is this conglomeration of car, motorbike and machinery parts. The engine is from a hay baler. The hard tops, one for summer and one for winter, are Dodge trunk lids. Cycle tires are on all three wheelsâ€”the front two of which are Chryslers. Several other makes go into it as well. Builder Mel Gould has driven it 12,000 trouble-free miles.

JIGER (pronounced jigger) is the creation of inventor John Gower of Toronto, Canada. It’s a six-wheeled, fiber glass-bodied, hell-‘n’-high-water-bug that should strike the fancy of many an outdoorsman. Two 5-1/2-hp engines drive Jiger overland at 30 mph. A pair of props recessed in the “stern” push it through the water. Hardly anything, in fact, can bar this spunky 200-lb. two-seater from your favorite hunting or fishing grounds. â€”Gordon McCaffrey

IN the past Ed Alsbury, a safety engineer and hobby racer of Class H cars from Kirkwood, Mo., has used the popular little Crosley engine in his cars. Class H mills are limited to 46 cubic inches. His latest homebuilt, which will hit about 95 mph wide open, has a rear-mounted, four-cylinder, 50-hp Mercury outboard motor. He chose this power package to keep the weight down; the finished car weighs 685 lbs. with gas and oil.

The JABRO body, a glass fiber job by James Broadwell, allows the engine to be mounted fore or aft. (The first JABRO car appeared on Mi’s cover in May 1958.) For ease of maintenance the body may be completely removed by removing two bolts up front and two at the rear.

The Merc engine is mounted on its side and power is taken off the top instead of the propeller end. A pair of custom adaptor plates hitch the gearbox to the engine. A washing machine pump handles 20 gallons of water a minute at 6000 rpm. The radiator is up front, with long hoses running around the driver to a special water manifold. Each cylinder has its own hose connection with the manifold. As an outboard the engine runs at 70Â°; here it runs at 180Â° with the cooling system. Alsbury has kept the engine stock; the fine power-to-weight ratio allows this, makes souping-up unnecessary. â€”Robert Hegge

HERE is the wild beauty you find only in car bodies that are designed to stabilize and to cut drag at very high speedsâ€”such as 200 mph. If you have a spare $13,000 in your hankie drawer you can flirt with speed like that in your new Stiletto racing sports car by Bocar Manufacturing, Denver, makers of fastish cars. The Stilleto’s injected Corvette engine twists out 500 hp at 8500 rpm. While it hits 200 only now and then it can hold 130 mph for a quarter-mile with a full tank. It’s 14 feet, nine inches long, weighs 1,740 dry. Brakes are 11-inch Bendix aluminum jobs. Torsion bars fore and aft. For winning races!

CAN THIS BE A THUNDERBIRD?

THIS totally customized 1956 Thun-derbird has won more than 182 trophies in car shows throughout the United States and Puerto Rico. The rebuilding job was done by owner Don Von Dwingelo of Paramus, N. J. and Tony Bruskivage of Hawthorne, N. J. The body glows with 16 coats of red lacquer; the hardtop is cream speckled with gold. Dual headlamps from a 1960 Chevy beam from oval-hooded grille.

Power for this rocket derives from a 1958, 461-cubic-inch Olds engine that answers to a competition stick shift.

Von Dwingelo is reluctant to put a value on his ‘Bird but he’s insured it for $15,000!â€” Rudy Arnold