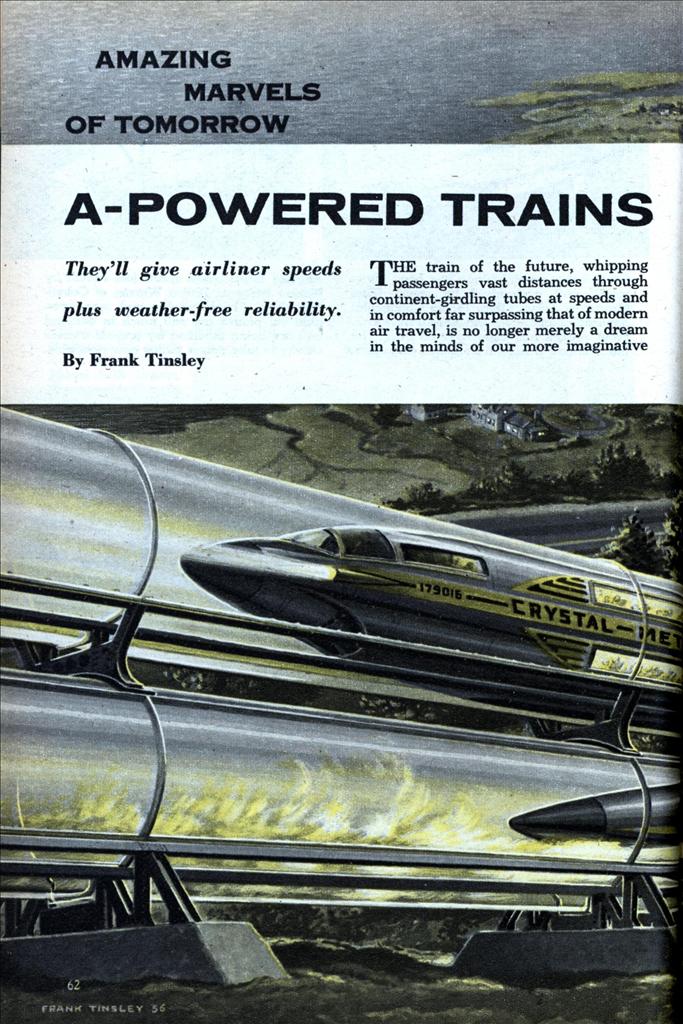 THE train of the future, whipping passengers vast distances through continent-girdling tubes at speeds and in comfort far surpassing that of modern air travel, is no longer merely a dream in the minds of our more imaginative designers and engineers. This old idea (New York’s first working subway train was sucked through a tube) has been brought well within the realm of probability—and the hero of this advance is, as has so often been the case in the history of technology, a new material.

A crude form of this material has been serving man since the dawn of history. Glass, commonly thought of as that brittle stuff that boys like to smash with baseballs and slingshots, is in this generation being brought to such strength, lightness and flexibility that the glass industry is now looking toward a new era, not so far off, when bridges, buildings and car bodies will be built of glass that is stronger and lighter than steel. And from Oscar G. Burch, Vice President in charge of research for the Owens-Illinois Glass Company, a very sound and serious-minded engineer, comes the word that the tubed train may some day take over the long haul business.

Long distance trains, according to Mr. Burch, may abandon today’s exposed tracks and rocket across country in glass tubes, propelled at airplane speeds by compressed air. He also envisions glass-sheathed spaceships and entire cities built beneath air-conditioned domes of lens-clear crystal. So far, says Mr. Burch, we have achieved a paltry one per cent of the theoretical strength and use potential of glass. As small an increase as ten per cent will be ample to turn his seemingly bizarre predictions into solid actuality!

As far as we know, however, Burch’s test-tube railroad is an entirely new concept, and one which intrigues your editors. We have pondered its engineering problems and possibilities and herewith present our own preview of tomorrow’s transparent trains.

First of all, it must be emphasized that Mi’s tubular train will not replace today’s open-face local and commuter services. It is intended, rather, to complement these by adding airplane speeds to long distance railway runs. The possibilities of its fast, round-the-clock service, unchecked by snow or storm, should reverse present trends in passenger travel and give the airlines a real run for their money. Zipping through its glass sheath from New York to Florida or coast-to-coast at 300 mph or better, our crystal flyer can combine the distance-devouring zoom of aerial flight with the safety and comfort of surface travel.

While conceding the practicability of structural glass for tubular railroad tracks, we could not however, go along with Mr. Burch’s method of propulsion. The use of compressed air, we felt, in- volves too many problems of generation and control. A string of power stations would have to be spaced along the line to evacuate the tube ahead of the train and build up propulsive pressures behind it. In addition to the expense and complication, this system would limit the operating headway by preventing trains from following one another at reasonably frequent intervals.

There was also some question as to the public’s willingness to be shot along in devices not under direct human control. Your editors concluded therefore, that each individual train should be driven by an engineer and propelled by a self-contained powerplant capable of controlling the pressures generated by its passage through a closed tube.

The most obvious answer to these specifications is the jet engine. With an airplane-type nose intake, this could suck in air from in front of the train and blow it out behind. By thus creating a partial vacuum ahead and pressure astern, our jet could either raise the speed or reduce the power requirement with a consequent increase in the vehicle’s overall efficiency.

There is, however, a serious objection to the conventional jet engine operating on a petroleum-base fuel. It expands the working fluid—air—by mixed combustion and the gases expelled from its tailpipe would soon taint the air in the tube. Succeeding trains would rapidly concentrate the carbon monoxide content to a poisonous level. Therefore, the standard chemical fuels were out. We had to find a heat source which could expand the working air without contaminating it. In this atomic age we had not far to look.

The new type of atomic heat generation unit in which the reactor core is surrounded by a built-in heat exchanger and the whole encased in composite shielding, will eventually be light and compact enough for locomotive use. This is the plant for our tubular train. From it, molten sodium is piped through shielded ducts to a cylindrical heat transmitter enveloping the jet engine’s “combustion chamber.”

Compressed air entering the chamber is heated and expanded without coming into physical contact with the sodium. It then blows out the tail-pipe as clean as it came in. This operating air, as previously noted, has been drawn into an intake beneath the nose of the leading unit and carried the length of the train through ducts built into the lower sides of each car. Between the cars, flexible connectors—larger versions of today’s air brake hoses—span the coupling gaps.

Upon reaching the rear power unit, the air flows into twin jet engines mounted on either side of the reactor. There it is compressed, expanded by atomic heat and ejected rearward to produce the propelling thrust.

Mi’s train differs radically from today’s iron horse in that its wheels and tracks are used only at low speeds and stops and function chiefly as a landing gear. While loading and unloading in a station, the wheels are lowered to bear the weight of the train. After starting, they continue to carry the weight to a diminishing degree as the train moves forward. During this gradual acceleration, the air ahead of the train is compressed to an increasing degree and forced to flow backward around the cars through the space between the trains outer surface and the tube’s inner wall.

When the train reaches a certain speed, this surrounding layer is compressed to a point where it supports the vehicle’s weight. Thereafter, the train retracts its wheels and literally “flies” through the tube like an airplane test model in a wind tunnel. Having no “hot box” wheel bearings or track forces to consider, airline speeds are easily attainable.

In designing the train itself, your editors drew liberally from ACF Industries’ high speed Talgo Train. With an unusually low center of gravity, short, close-coupled car units and steerable, automobile-type wheels, the lightweight Talgo can snake around turns at 80 mph or more. All these characteristics are essential to tube transit, where smooth-surfaced curvability is a must. About the only mechanical changes necessary were to make the wheels retractable and provide a bottom “keel” to prevent lateral rotation within the tube. Like the Talgo, the basic MI car is 60 feet long, broken into three articulated units. Each unit is equipped with one pair of rear wheels, its forward end pivoting on the pair ahead like the body of a trailer truck.

Here, however, the Talgo resemblance ends. Circular in section except for the bottom keel, Mi’s cars are double-decked to gain floor space and make maximum use of interior space. The vestibule platforms and doors are set midway between the levels, with short stairways leading up and down to the two decks. They are designed so that the platforms rest on top of the wheel wells, thus conserving space. There is an adjoining lavatory on the lower level.

In line with the latest trend in air travel, the cars are divided into two price classes. The lower deck offers coach service with a maximum-capacity arrangement of forward facing seats in conventional railway style. They are ultra-modern, individually tilting chairs with adequate leg room, set one step above a sunken central aisle. Windows are the continuous-strip type of steel-strong, structural glass and form the side panels of the car. Above are individual reading lights and racks for luggage and clothing.

The upper deck features deluxe, chair-car accommodations which like its present railroad counterpart, is a reserved, extra-fare service. Paired seats are placed diagonally to fully exploit the vista-dome windows. They are set far enough apart to permit full reclining position for night runs. The triangular floor areas on each side enable the traveler to enter or leave without disturbing his seatmate. Porter or hostess service will be provided.

The first-class diner is on the upper level of the unit adjoining the rear power car, with a capacious kitchen and pantry positioned above the engine room. The atomic heat which drives the train and generates its auxiliary electric power, may also be tapped for cooking. A dumbwaiter connects the upper pantry with a similar one below. This serves the more modest priced grill car on the lower level. Both diners are inter- connected and the traveler can take his choice. Placing the eating facilities at the rear will present no undue hardship as trains will be limited in length and scheduled for frequent runs on short headway.

This is MI’s visualization of Mr. Burch’s tubular railway. It is a composite of several research projects now under intensive development and although it may seem like a pipe dream now, the imminent perfection of structural glass and aircraft atomic power-plant will suddenly catapult it into the realm of solid practicality. As for the Talgo Train, that little gadget has been running for half a decade now, speeding passengers at a safe 100 mph clip.

The tubed train is only one of the startling innovations in the use of glass envisioned by the researchers of Owens-Illinois and other manufacturers. The diminishing supply of metal resources makes it imperative that new construction materials be found, and glass-makers are convinced that all the properties of metals can be developed in glass.

They see the day fast approaching when the pressure of increasing world population will lead to the erection of entire glass cities in desert and arctic regions—cities constructed on glass columns, enclosed in glass domes, heated and air conditioned by atomic power. Inside the glass cities of the future will be glass homes, glass furniture and glass cars, planes and trains—all combining the structural strength of steel with the transparency and beauty of crystal.

But before these things exist, it’s possible you may see Mi’s A-powered trains in glass tubes, zipping from coast to coast at 300 mph—a fitting beginning to our new series on the Amazing Marvels of Tomorrow!