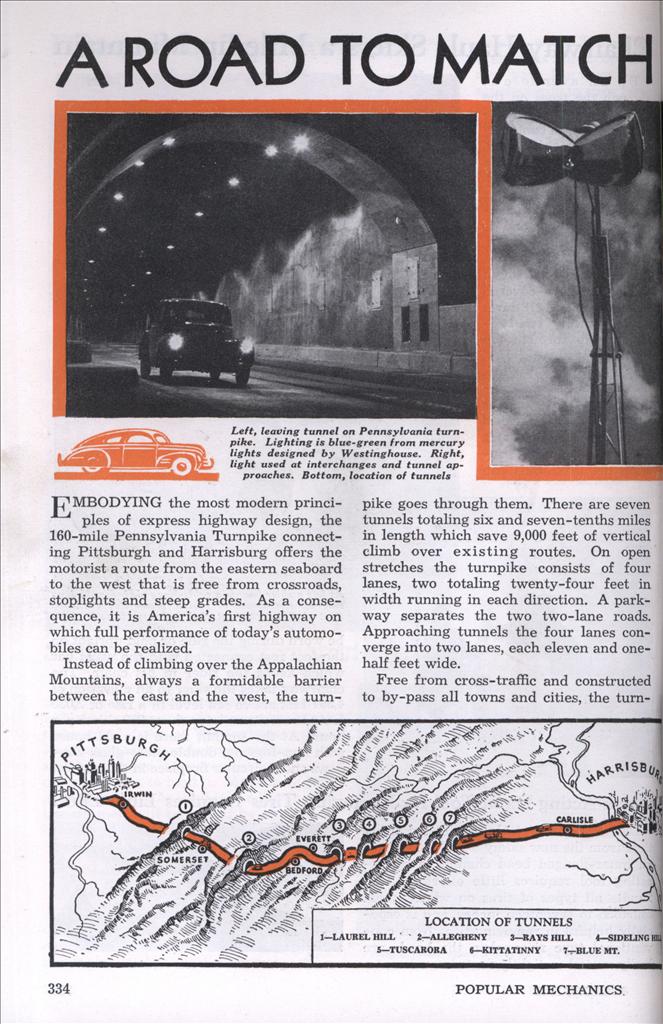 A ROAD TO MATCH TODAY’S CAR

EMBODYING the most modern principles of express highway design, the 160-mile Pennsylvania Turnpike connecting Pittsburgh and Harrisburg offers the motorist a route from the eastern seaboard to the west that is free from crossroads, stoplights and steep grades. As a consequence, it is America’s first highway on which full performance of today’s automobiles can be realized.

Instead of climbing over the Appalachian Mountains, always a formidable barrier between the east and the west, the turn- pike goes through them. There are seven tunnels totaling six and seven-tenths miles in length which save 9,000 feet of vertical climb over existing routes. On open stretches the turnpike consists of four lanes, two totaling twenty-four feet in width running in each direction. A parkway separates the two two-lane roads. Approaching tunnels the four lanes converge into two lanes, each eleven and one-half feet wide.

Free from cross-traffic and constructed to by-pass all towns and cities, the turn- pike, which has been nicknamed “The Dream Highway,” lends itself to exceptionally high speeds. On test runs automobiles have exceeded 100 miles per hour. However, the highway’s main purpose is to provide a safe avenue for travel at uniform speed, sixty to seventy miles per hour if the driver desires, over the entire stretch.

At one point the motorist has a twelve-mile stretch of highway that is free from curves. Where curves are employed, a system of progressive curves is used, leading up to the sharpest curve required.

Multi-color lights make the turnpike not only the safest lighted motor road in the world but also the most colorful. Yellow sodium vapor illumination is used at tunnel approaches and outside traffic interchanges where vehicles enter and leave the highway; the interiors of the tunnels are bathed in the blue-green light of mercury lamps, and white light from incandescent lamps illuminates buildings at the interchanges. An emergency system, powered by storage batteries, will take care of possible failures of the regular lighting system. Lighting in the tunnels is supplied by 1,060 mercury vapor units, each with a capacity of 250 watts, giving a minimum visibility along the tunnel of more than 1,000 feet, or more than is necessary to provide maximum driving safety at sixty miles per hour, and more. This equipment was supplied by Westinghouse Electric and Manufacturing company.

Among the additional safety features of the highway are: reflector markers throughout the length of the road; wide shoulders on the outside of each roadway so that vehicles may be pulled entirely clear of the pavement when parking; powerful ventilating equipment to maintain fresh air in the tunnels; combination towing and fire trucks for use in the tunnels and elsewhere; a two-foot, nine-inch emergency walkway through each tunnel, and 1,200-foot acceleration lanes on which a car entering the turnpike from another highway may pick up speed and merge safely with traffic on the turnpike.

Important in national defense is the fact that the two twenty-four-foot lanes of the turnpike permit easy movement of motorized troops. Its structure is sufficient to carry the ten-wheeled anti-aircraft guns, which are among the heaviest of mobile military equipment.