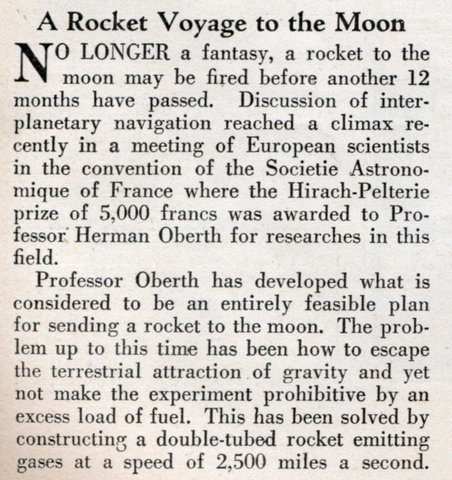 A Rocket Voyage to the Moon

NO LONGER a fantasy, a rocket to the moon may be fired before another 12 months have passed. Discussion of interplanetary navigation reached a climax recently in a meeting of European scientists in the convention of the Societie Astronomique of France where the Hirach-Pelterie prize of 5,000 francs was awarded to Professor Herman Oberth for researches in this field.

Professor Oberth has developed what is considered to be an entirely feasible plan for sending a rocket to the moon. The problem up to this time has been how to escape the terrestrial attraction of gravity and yet not make the experiment prohibitive by an excess load of fuel. This has been solved by constructing a double-tubed rocket emitting gases at a speed of 2,500 miles a second.