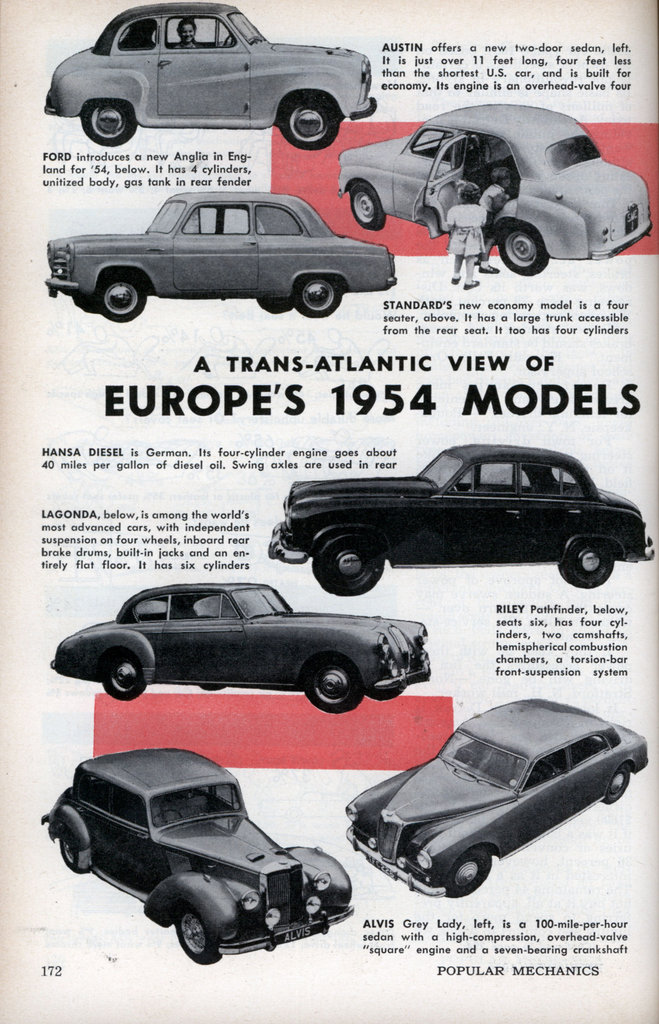 A TRANS-ATLANTIC VIEW OF EUROPE’S 1954 MODELS

FORD introduces a new Anglia in England for ’54, below. It has 4 cylinders, unitized body, gas tank in rear fender

AUSTIN offers a new two-door sedan, left. It is just over 11 feet long, four feet less than the shortest U.S. car, and is built for economy. Its engine is an overhead-valve four

STANDARD’S new economy model is a four seater, above. It has a large trunk accessible from the rear seat. It too has four cylinders

HANSA DIESEL is German. Its four-cylinder engine goes about 40 miles per gallon of diesel oil. Swing axles are used in rear

LAGONDA, below, is among the world’s most advanced cars, with independent suspension on four wheels, inboard rear brake drums, built-in jacks and an entirely flat floor. It has six cylinders

ALVIS Grey Lady, left, is a 100-mile-per-hour sedan with a high-compression, overhead-valve “square” engine and a seven-bearing crankshaft

DAIMLER Conquest roadster, right, has aluminum-alloy frame and body. Other features include twin carburetors, air scoops in front and rear fenders to keep the brakes cool, and torsion-bar front-wheel suspension

A.C. ACE, left, is a speedy two-seater that easily hits 100 m.p.h. Engine is an overhead-camshaft six with three carburetors. Frame is formed of two straight steel tubes. All wheels are independently sprung

SINGER is making a plastic-bodied 4-seater. Luxuriously finished, it is a rich cream plastic. Entire front body section hinges up to uncover the engine

LANCIA Gran Turismo, below, has the famous Italian styling and the fine V6 engine that won the 1953 race in Mexico. All wheels are independently sprung. Clutch, gearbox, differential are a rear-mounted unit