Not bad, this was published six months after the first laser was demonstrated. 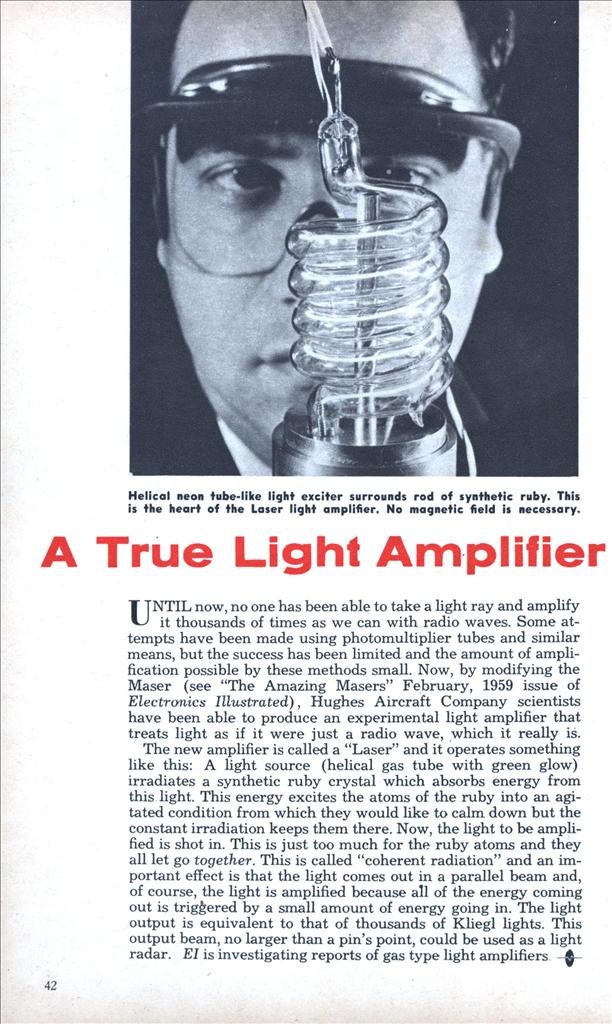 UNTIL now, no one has been able to take a light ray and amplify it thousands of times as we can with radio waves. Some attempts have been made using photomultiplier tubes and similar means, but the success has been limited and the amount of amplification possible by these methods small. Now, by modifying the Maser (see “The Amazing Masers” February, 1959 issue of Electronics Illustrated), Hughes Aircraft Company scientists have been able to produce an experimental light amplifier that treats light as if it were just a radio wave, which it really is.

The new amplifier is called a “Laser” and it operates something like this: A light source (helical gas tube with green glow) irradiates a synthetic ruby crystal which absorbs energy from this light. This energy excites the atoms of the ruby into an agitated condition from which they would like to calm down but the constant irradiation keeps them there. Now, the light to be amplified is shot in. This is just too much for the ruby atoms and they all let go together. This is called “coherent radiation” and an important effect is that the light comes out in a parallel beam and, of course, the light is amplified because all of the energy coming out is triggered by a small amount of energy going in. The light output is equivalent to that of thousands of Kliegl fights. This output beam, no larger than a pin’s point, could be used as a light radar. EI is investigating reports of gas type light amplifiers.