Mechanics And Handicraft
Issue: Sep, 1936
Posted in: Ahead of its time
Tags: chunnel, giant construction projects
7 Comments on A Tunnel Across the English Channel? (Sep, 1936) 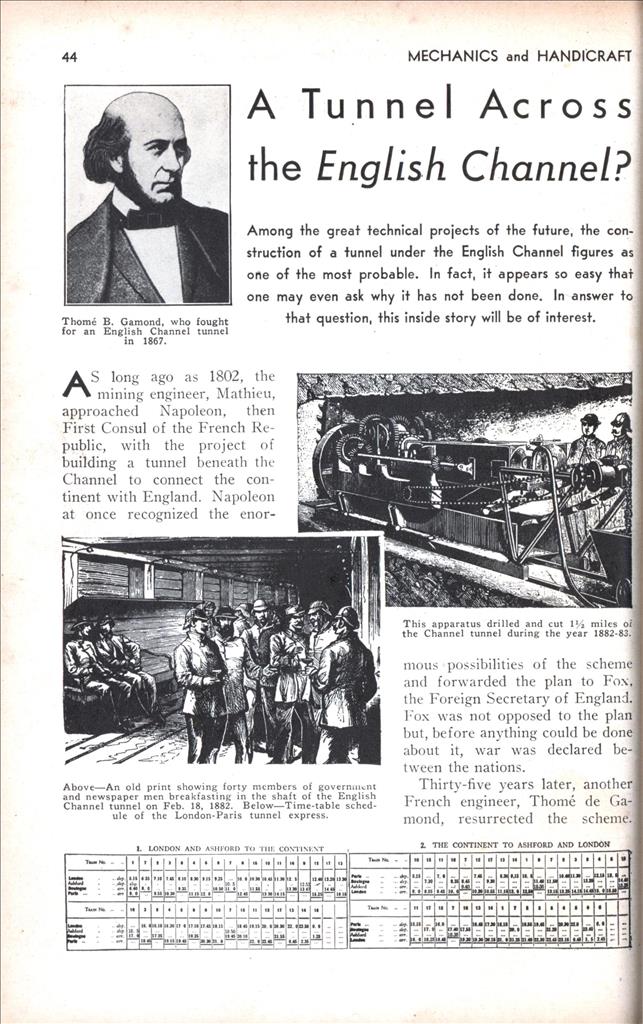 A Tunnel Across the English Channel?

Among the great technical projects of the future, the construction of a tunnel under the English Channel figures as one of the most probable. In fact, it appears so easy that one may even ask why it has not been done. In answer to that question, this inside story will be of interest.

AS long ago as 1802, the mining engineer, Mathieu, approached Napoleon, then First Consul of the French Republic, with the project of building a tunnel beneath the Channel to connect the continent with England. Napoleon at once recognized the enor- mous possibilities of the scheme and forwarded the plan to Fox, the Foreign Secretary of England. Fox was not opposed to the plan but, before anything could be done about it, war was declared between the nations.

This time there was a definite plan for the construction of the gigantic tube. De Gamond planned the construction of a tunnel embodying a series of iron tubes, placed end to end, and running through several concrete islands planted in the Channel. In addition he had a diagram, showing how fresh air could be supplied constantly to the tube by pumping stations.

Later in the century de Gamond succeeded in interesting the French emperor, Napoleon III— always the first to endorse a fantastic and nebulous idea—in the plan. De Gamond was referred to Queen Victoria and, during the 1867 Paris World Exhibition, the undertaking was introduced to the public.

Here de Gamond joined the British engineer William Lowe, who had also been perfecting plans for a Channel tunnel. Within a short time their plans, besides receiving the approval of Emperor Napoleon, were adopted by an international committee, which then set out to obtain governmental funds with which to build an experimental drift.

The French Ministry of Public Works reported favorably on the scheme, but the Franco-Prussian War in 1870 temporarily terminated such plans.

The advantages of a tunnel beneath the Channel are obvious. By such means uninterrupted contact between Britain and the Continent could be maintained.

Goods would no longer have to be taken from French trains, placed on boats and again unloaded upon reaching a port in England. Much strategic importance, also, has been placed upon such a Channel tunnel. With the Franco-Prussian war over, the British and French governments again resumed their discussion, and reached an agreement over such questions as the legal jurisdiction over the tunnel. There were then two companies ; the Channel Tunnel Company—a British firm—and the French Submarine Company.

In 1875, both companies received permission to do preliminary work. Work was begun on the French side, in the vicinity of Calais, at the small village of Sangatte. Here a shaft was dug as deep as the actual tunnel would be, and a tunnel section of miles was constructed.

On the English side, all did not go so smoothly. Permission was obtained to begin work near St. Margaret’s Bay, east of Dover. The British company then passed through a series of receiverships until, in 1881, it was controlled by the South Eastern Railway company.

Preliminary borings were then begun, which demonstrated the practicality of the plan. In all, three trial tunnel shafts were built.

At this point all plans came to naught. The British Army general staff—influenced by the railway interests—fought the plan. In 1883, both Houses of Parliament passed a joint resolution terming the plan inexpedient. What was really feared was that Britain’s “splendid isolation” would be brought to an end. Little did they dream that, within the next sixty years, a prime minister would publicly say that Britain’s coastline lay on the Rhine, not the Channel.

The Channel Company was not content to retire defeated. Receptions for the press were held, demonstrating the practicality of the scheme. A new air-driven machine for cutting through rock was exhibited, as were elevators for carrying rock and sand to the surface, and trucks for carrying the debris through the tunnel.

The tunnel would be no threat to England’s security, company officials said. To prove their contention, they revealed how a viaduct, open to the fire of British warships could be built on the French side. Surely this would prevent an invasion of England by means of the tunnel; but the British general staff remained adamant. Politics and bigotry triumphed over science.

In 1886, the French Submarine Company absorbed the Channel Tunnel Company with the consent of the Board of Trade.

Twenty years later, in 1906, another unsuccessful bill was raised in Parliament. After the war the proposal was again raised from the dead, as it were; but the Committee for Imperial Defense brought this effort to a quick end.

In 1929 another such bill was brought before Parliament, but this time a bridge spanning the Channel was given precedence. The latest bill came before the House of Commons on June 30, 1930, was favored by the Government’s economic committee, but opposed by the Committee for Imperial Defense. By the close vote of 179 to 172, it was rejected.

Geologically there remains no reason why a Channel tunnel should not be built. The bottom of the Straits of Dover is of chalk marl, a stone impervious to water. The Channel here is one of the shallowest passages in the world, being only thirty fathoms deep at the lowest point, and there are no sudden jump-offs.

The total length of the tunnel would be only thirty-four miles, twenty-four of which would be under the sea. The greatest depth below the Channel’s bed would be ninety-five feet.

Nevertheless, the conservative British members of Parliament and a worried general staff continue to obstruct a scheme which would be, not only a marvel of science, but a boon to trade relations with Britain’s ally—France.