I’m not sure that this would work very well… Not to mention building it the middle of a river with a decent current would be less than easy. 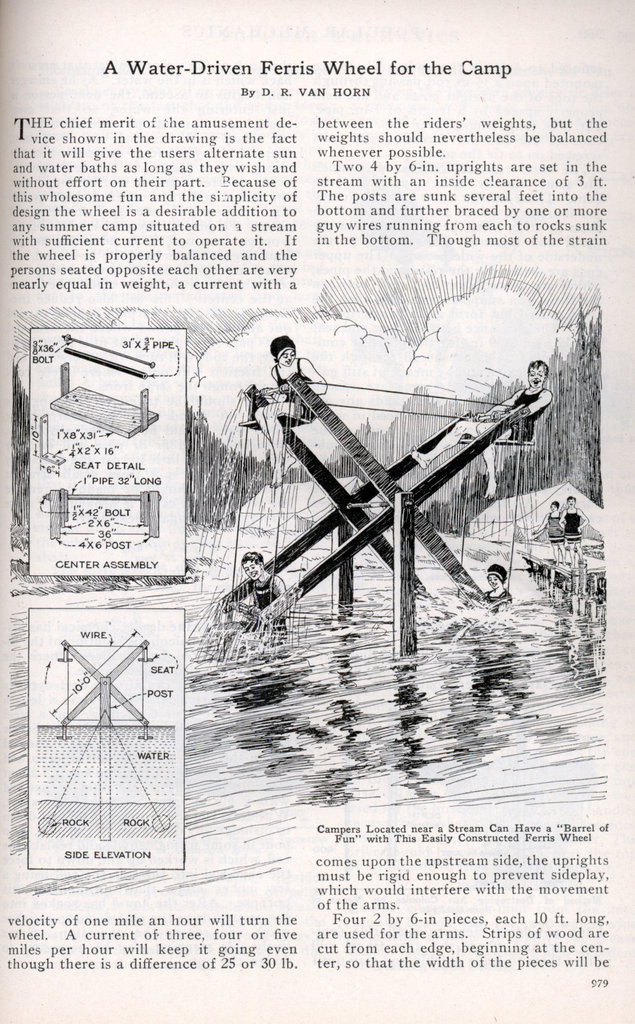 A Water-Driven Ferris Wheel for the Camp

THE chief merit of the amusement device shown in the drawing is the fact that it will give the users alternate sun and water baths as long as they wish and without effort on their part. Because of this wholesome fun and the simplicity of design the wheel is a desirable addition to any summer camp situated on a stream with sufficient current to operate it. If the wheel is properly balanced and the persons seated opposite each other are very nearly equal in weight, a current with a velocity of one mile an hour will turn the wheel. A current of three, four or five miles per hour will keep it going even though there is a difference of 25 or 30 lb. between the riders’ weights, but the weights should nevertheless be balanced whenever possible.

Two 4 by 6-in. uprights are set in the stream with an inside clearance of 3 ft. The posts are sunk several feet into the bottom and further braced by one or more guy wires running from each to rocks sunk in the bottom. Though most of the strain comes upon the upstream side, the uprights must be rigid enough to prevent sideplay, which would interfere with the movement of the arms.

Four 2 by 6-in pieces, each 10 ft. long, are used for the arms. Strips of wood are cut from each edge, beginning at the center, so that the width of the pieces will be reduced to 4 in. at the ends. These are mounted upon a 1/2 in. rod, passing through the tops of the upright posts and are held properly spaced by a length of 1-in. pipe, 2 ft. 8 in. long, slipped over the rod. The ends of the rod are threaded, and nuts screwed on to tie the parts.

The outer ends are connected in much the same way by 3/4-in. pipe and 3/8 in. bolts. These smaller outer bolts also carry the four seats, which are suspended from them by strap irons, bent as shown in the detail and fastened with screws to the underside of the wide boards. The upper ends are drilled for the rods, and the pipes, which are placed over the rods between the strap-iron supports, not only keep the arms spaced but form good handgrips, as well. The clearance between pipe and seat should be 8 or 9 in. for the greatest comfort. Small holes are bored through the arms as indicated and by means of stiff galvanized wire, the four arms are spaced equally. This bracing withstands any ordinary strain and avoids the need of more complicated bracing at the crossing of the arms. Ordinarily the seats should submerge not more than 20 in., though the greater the depth to which they go, the greater will be the power provided by the current. Assuming that one person takes each seat, the wheel is kept in motion by the push of the water against that person’s back which is in the water. As he emerges and begins to ascend, the next person is just entering the water, so that even though the momentum created would carry the wheel over at least one revolution, there is always at least one person in the water and at least one “power impulse” every quarter turn ; it will be found that the wheel will turn when empty, by the slight pressure of water against the vacant seats. To prevent excessive wear of the wooden bearings, it is advisable to get four large washers to fit the 1/2-in. rod, and attach one by means of long wood screws to each side of the arms where they cross at the center. This will also reduce friction. If desired, this plan can be carried out also at the points where the arm-end bolts pass through. If the fit is tight, however, the rods will turn with the wheel and the friction will occur where these rods pass through the strap irons.

Care should be taken in selecting the wood. A wood that will warp badly when wet, should be avoided absolutely. Straight-grained fir or pine will do very well. To save a little in cost, the posts may be cut on the spot from small straight trees. Plans should be made to remove the wheel when camp is broken and store it away for use again next year.