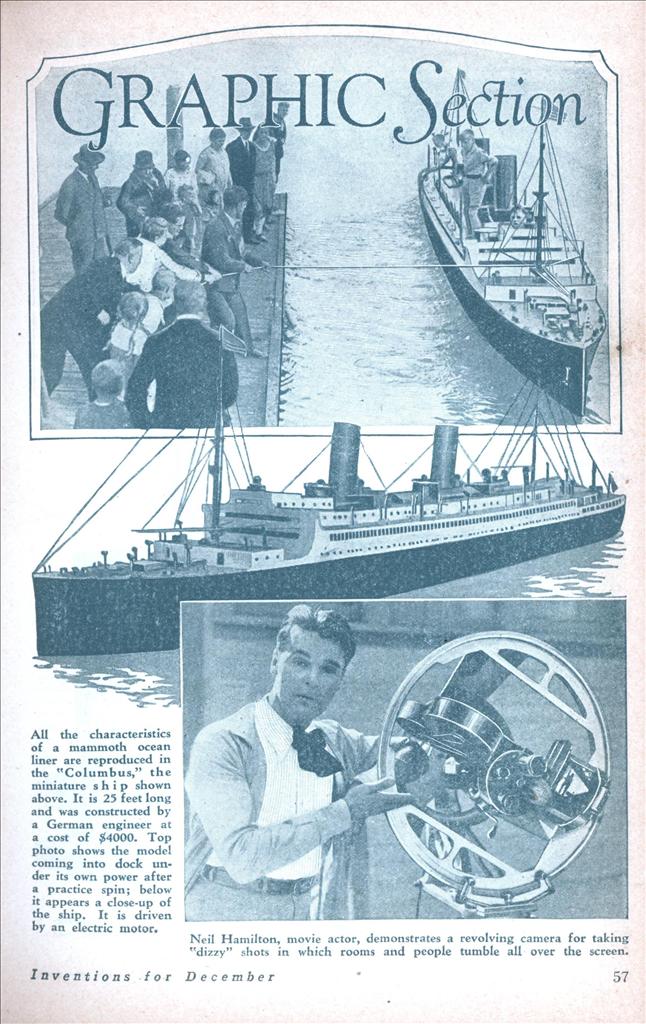 Half automobile and half motorcycle, the novel vehicle shown above was built by an Englishman to take his bride on a honeymoon trip. The car is driven by a motorcycle engine and rear wheel.

The above model of the first commercial electric generating station, designed by Thomas A. Edison in 3 882, was made for Henry Ford’s museum at Dearborn.

This shows a Savoia Marchetti twin-motored seaplane with its pilot, Dal Molin, standing alongside. This is Italy’s fastest airplane, capable of a speed of 200 m.p.h. Note position of pilot’s cockpit between the two motors.

Static lift of dirigible gases combined with dynamic lift of airplane wings is expected to make the novel aircraft shown above the air leviathan of the future. Its inventor, John Hodgdon of Long Beach, Cal., claims that the presence of wings will prevent the rolling and pitching common to blimps and will make it possible for his ship to land without the aid of a ground crew.

One of the largest guns in Uncle Sam’s army was inspected by West Point cadets of the graduating class who visited the Aberdeen proving grounds near Washington. The Big Bertha shown in the above photo is a 14-inch mounted railway gun which fires a projectile weighing 2000 pounds a distance of 32 miles, and can pierce 14-inch armor plate.

This special machine cuts, prints, folds and stacks the mail sacks in one operation.

The machine shown above rivets the grommets, or metal eyelets, into the mail sacks. More than 20,000,000 grommets are manufactured and placed in the sacks every year. Although the bags are made out of the most durable canvas, the government carries such a huge volume of mail every year that the factory must run without a stop to keep the postoffice supplied with sacks. Practically all of the manufacturing machinery is specially designed for its purpose. Like the government printing department, the mail bag factory saves Uncle Sam thousands of dollars every month through efficient large-scale production.

Designed to carry 32 passengers, the new Fokker F-32, shown above, is the largest airplane ever built in America and the largest land plane in the world. The photo shows 47 persons standing in line under the giant’s wings and gives a good idea of its tremendous size. The huge ship successfully passed its trial flights before a committee of aeronautical experts. It is powered with four radial motors mounted in tandem under the wing. This type of power plant mounting, it is predicted, will soon displace the tri-motored type in which one engine is mounted on the nose of the fuselage where its efficiency is somewhat impaired.

Built-in furniture as an integral part of the decorative scheme will distinguish the apartment of tomorrow. Above is a built-in radio and phonograph with disappearing doors.

This faithful replica of a Viking ship stopped off in London on its way around the world.

Spectators sought cover in a hurry when the motorboat Invicta II leapt the bank in a recent race at Rickmansworth, England. The remarkable action photo above shows the motorboat just as it bounced over the bank. Note the woman spectator underneath the boat. Fortunately no one was hurt —not even the pilot, who was flung out of his craft in making a sharp turn.

Old motor oil may become a source of new if the experiments of W. H. Herschel of the U. S. Bureau of Standards, shown above, perfects the apparatus on which he is working. It is claimed that oil refined by his process costs only two-thirds as much as new oil, and that it has a greater resistance to heat owing to the fact that unstable elements have already broken down.

The plane shown above taking off at a sharp angle by means of automatic interconnected wing slots and flaps is the Hand-ley-Page entry in the Guggenheim contest to determine the safest airplane. It is claimed that the wing slots make it impossible for the plane to stall or fall into a tail spin. The wing slots can be seen in the leading edge of the upper wing.

The ocean seadrome designed by Edward B. Armstrong to provide a safe floating landing field for trans-Atlantic airplanes is shown above nearing completion in a Delaware shop. Only one of the units is shown in the picture. Hollow ballast-filled bases support the platform solidly in the water.

Novel forms of radio loud speakers ate illustrated in this picture by E. L. Rice, Washington inventor who has been experimenting along this line. The tapestry on the wall forms a loud volume speaker; the photo easel contains more speaker cells, as does the pillow at his arm. In his hand he holds a vest pocket speaker, and in the vase is another packet which makes it a talking vase.

Built on an ordinary commercial auto chassis, the armored car shown above is the invention of Col. Bruce Palmer of Fort Riley, Kansas. It is a cross between a tank and an automobile. It can maintain a speed of 45 miles an hour and carries a machine gun on a flexible mount. In addition to the regular pneumatic tires there is an auxiliary set of solid rubber on which the car rides in case of punctures by enemy bullets. The circle at the right shows a close-up.

Spraying of insect-killing chemicals from an airplane is the method employed by up-to-date fruit raisers in eliminating plant pests. Photo shows plane with funnel-like device designed for this work.