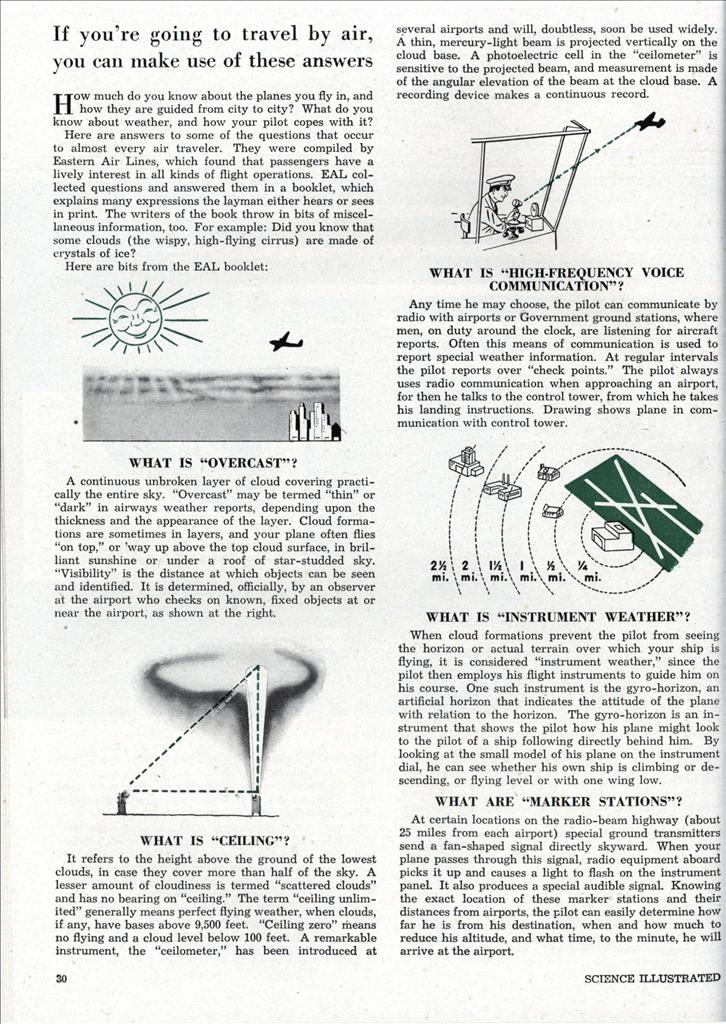 If you’re going to travel by air, you can make use of these answers

Here are answers to some of the questions that occur to almost every air traveler. They were compiled by Eastern Air Lines, which found that passengers have a lively interest in all kinds of flight operations. EAL collected questions and answered them in a booklet, which explains many expressions the layman either hears or sees in print. The writers of the book throw in bits of miscellaneous information, too. For example: Did you know that some clouds (the wispy, high-flying cirrus) are made of crystals of ice?

Here are bits from the EAL booklet: WHAT IS “OVERCAST”?

A continuous unbroken layer of cloud covering practically the entire sky. “Overcast” may be termed “thin” or “dark” in airways weather reports, depending upon the thickness and the appearance of the layer. Cloud formations are sometimes in layers, and your plane often flies “on top,” or ‘way up above the top cloud surface, in brilliant sunshine or under a roof of star-studded sky. “Visibility” is the distance at which objects can be seen and identified. It is determined, officially, by an observer at the airport who checks on known, fixed objects at or near the airport, as shown at the right.

It refers to the height above the ground of the lowest clouds, in case they cover more than half of the sky. A lesser amount of cloudiness is termed “scattered clouds” and has no bearing on “ceiling.” The term “ceiling unlimited” generally means perfect flying weather, when clouds, if any, have bases above 9,500 feet. “Ceiling zero” means no flying and a cloud level below 100 feet. A remarkable instrument, the “ceilometer,” has been introduced at several airports and will, doubtless, soon be used widely. A thin, mercury-light beam is projected vertically on the cloud base. A photoelectric cell in the “ceilometer” is sensitive to the projected beam, and measurement is made of the angular elevation of the beam at the cloud base. A recording device makes a continuous record.

WHAT IS “HIGH-FREQUENCY VOICE COMMUNICATION”?

Any time he may choose, the pilot can communicate by radio with airports or Government ground stations, where men, on duty around the clock, are listening for aircraft reports. Often this means of communication is used to report special weather information. At regular intervals the pilot reports over “check points.” The pilot always uses radio communication when approaching an airport, for then he talks to the control tower, from which he takes his landing instructions. Drawing shows plane in communication with control tower.

WHAT IS “INSTRUMENT WEATHER”?

When cloud formations prevent the pilot from seeing the horizon or actual terrain over which your ship is flying, it is considered “instrument weather,” since the pilot then employs his flight instruments to guide him on his course. One such instrument is the gyro-horizon, an artificial horizon that indicates the attitude of the plane with relation to the horizon. The gyro-horizon is an instrument that shows the pilot how his plane might look to the pilot of a ship following directly behind him. By looking at the small model of his plane on the instrument dial, he can see whether his own ship is climbing or descending, or flying level or with one wing low.

WHAT ARE “MARKER STATIONS”?

At certain locations on the radio-beam highway (about 25 miles from each airport) special ground transmitters send a fan-shaped signal directly skyward. When your plane passes through this signal, radio equipment aboard picks it up and causes a light to flash on the instrument panel. It also produces a special audible signal. Knowing the exact location of these marker stations and their distances from airports, the pilot can easily determine how far he is from his destination, when and how much to reduce his altitude, and what time, to the minute, he will arrive at the airport.

The term was introduced by Norwegian meteorologists to denote the line of separation between cold and warm masses of air. The more important “fronts” are caused by large-scale, horizontal movements of air, which bring air masses of widely different origin into juxtaposition. From the line of the “front” on the ground, the “frontal surface” slopes upward over the cold air.

A “cold front” is the boundary between an advancing cold-air mass and a mass of warm air, under which the cold air, being denser, pushes like a wedge. Passage of a “cold front” is normally accompanied by a rise in pressure, a fall in temperature, a wind shift, showers, and sometimes a squall or thunderstorm. A “warm front” is the boundary line between an advancing warm-air mass and a mass of cold air over which it is rising. Cooling, due to the lifting of the warm air, usually causes precipitation over a considerable area in advance of the “front.”

The radio beam employs the use of sound to guide the pilot. Two directional ground transmitters alternately send International Code signals at acute angles to each other. One sends the code signal for the letter N (dash-dot); the other, for the letter A (dot-dash). Along the path that divides the angle, these alternate signals interlock and are heard as a steady hum. When the pilot hears this hum he knows he is on his course, or “on the beam.” If he hears either of the signals independently, he knows exactly which way to go to return to his course—guided by whether he hears the N or A signal.

WHAT ARE ALL THOSE OUTSIDE GADGETS?

Radio transmitting stations operate on special frequencies or wave lengths. Airline pilots know these frequencies, as well as the locations of all principal transmitting stations along the route. ‘With one quick adjustment to the frequency of a station, the “automatic radio compass” instantly points the exact compass direction to that station. To determine his position, the pilot has only to repeat this procedure with two or more stations, then convert the compass readings to bearing lines on his flight map. He is at their intersection.

The difference between the “automatic radio compass” and the “radio direction finder” is that the latter is operated manually while the former is self-operating.

WHAT IS THE “CONTROL TOWER”?

It controls the traffic on the airport and in the air within a radius of three miles, except when designated approach controls are in effect. “Control tower” gives the pilot his landing instructions. All movements of any aircraft, or vehicle, on the field are regulated by radio or light-beam signals from “the tower.”

When a dispatcher is satisfied, after careful examination of local traffic and weather forecasts and reports, that flying conditions are satisfactory, he issues a “clearance” to the pilot that authorizes the flight to be made. However, the pilot can still refuse to make the flight if, in his judgment, flying conditions are not favorable. Both the pilot and dispatcher must be in agreement. When a member of an airline staff tells you “everything will be routine” about your flight, it means no interruptions are anticipated.

The movements of all commercial, military, and private aircraft are rigidly controlled by “Airways Traffic Control,” which is equivalent to a Federal traffic-police department of the air. For every flight a pilot must submit his proposed flight plan to the ATC for approval or amendment before he is permitted to take off. This flight plan predetermines all facts about the flight, such as estimated time and the altitude at which the plane will pass over check points en route. ATC also tells airports of your expected arrival time.