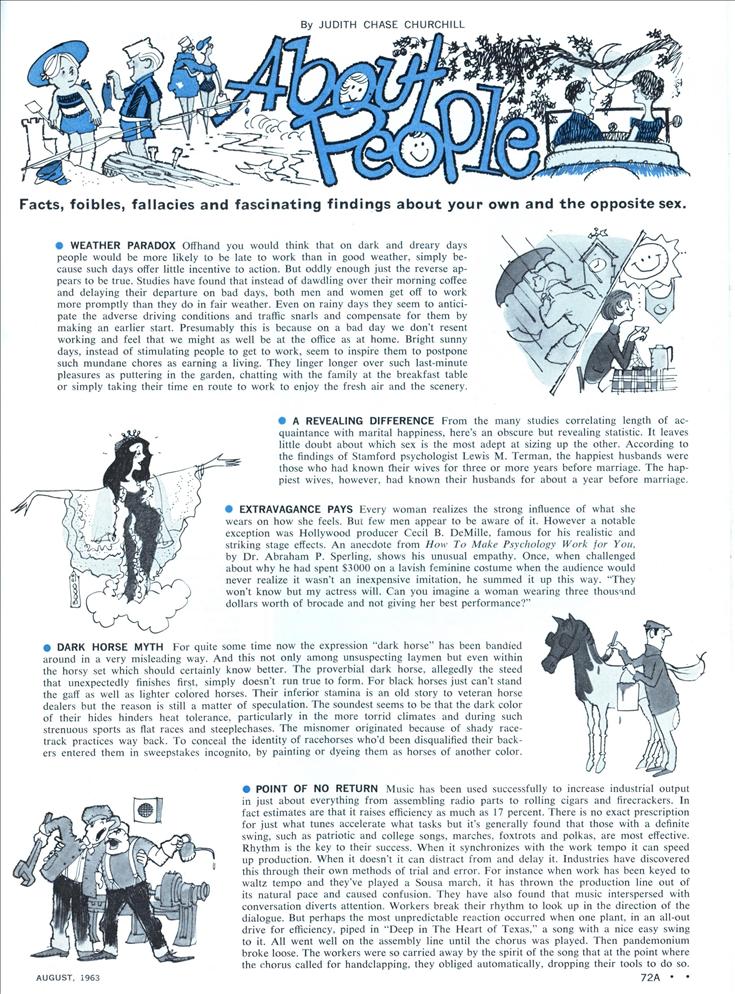 Facts, foibles, fallacies and fascinating findings about your own and the opposite sex.

• WEATHER PARADOX Offhand you would think that on dark and dreary days people would be more likely to be late to work than in good weather, simply because such days offer little incentive to action. But oddly enough just the reverse appears to be true. Studies have found that instead of dawdling over their morning coffee and delaying their departure on bad days, both men and women get off to work more promptly than they do in fair weather. Even on rainy days they seem to anticipate the adverse driving conditions and traffic snarls and compensate for them by making an earlier start. Presumably this is because on a bad day we don’t resent working and feel that we might as well be at the office as at home. Bright sunny days, instead of stimulating people to get to work, seem to inspire them to postpone such mundane chores as earning a living. They linger longer over such last-minute pleasures as puttering in the garden, chatting with the family at the breakfast table or simply taking their time en route to work to enjoy the fresh air and the scenery.

• A REVEALING DIFFERENCE From the many studies correlating length of acquaintance with marital happiness, here’s an obscure but revealing statistic. It leaves little doubt about which sex is the most adept at sizing up the other. According to the findings of Stamford psychologist Lewis M. Terman, the happiest husbands were those who had known their wives for three or more years before marriage. The happiest wives, however, had known their husbands for about a year before marriage.

• EXTRAVAGANCE PAYS Every woman realizes the strong influence of what she wears on how she feels. But few men appear to be aware of it. However a notable exception was Hollywood producer Cecil B. DeMille, famous for his realistic and striking stage effects. An anecdote from How To Make Psychology Work for You, by Dr. Abraham P. Sperling, shows his unusual empathy. Once, when challenged about why he had spent $3000 on a lavish feminine costume when the audience would never realize it wasn’t an inexpensive imitation, he summed it up this way. “They won’t know but my actress will. Can you imagine a woman wearing three thousand dollars worth of brocade and not giving her best performance?”

• DARK HORSE MYTH For quite some time now the expression “dark horse” has been bandied around in a very misleading way. And this not only among unsuspecting laymen but even within the horsy set which should certainly know better. The proverbial dark horse, allegedly the steed that unexpectedly finishes first, simply doesn’t run true to form. For black horses just can’t stand the gaff as well as lighter colored horses. Their inferior stamina is an old story to veteran horse dealers but the reason is still a matter of speculation. The soundest seems to be that the dark color of their hides hinders heat tolerance, particularly in the more torrid climates and during such strenuous sports as flat races and steeplechases. The misnomer originated because of shady racetrack practices way back. To conceal the identity of racehorses who’d been disqualified their backers entered them in sweepstakes incognito, by painting or dyeing them as horses of another color.

• POINT OF NO RETURN Music has been used successfully to increase industrial output in just about everything from assembling radio parts to rolling cigars and firecrackers. In fact estimates are that it raises efficiency as much as 17 percent. There is no exact prescription for just what tunes accelerate what tasks but it’s generally found that those with a definite swing, such as patriotic and college songs, marches, foxtrots and polkas, are most effective. Rhythm is the key to their success. When it synchronizes with the work tempo it can speed up production. When it doesn’t it can distract from and delay it. Industries have discovered this through their own methods of trial and error. For instance when work has been keyed to waltz tempo and they’ve played a Sousa march, it has thrown the production line out of its natural pace and caused confusion. They have also found that music interspersed with conversation diverts attention. Workers break their rhythm to look up in the direction of the dialogue. But perhaps the most unpredictable reaction occurred when one plant, in an all-out drive for efficiency, piped in “Deep in The Heart of Texas,” a song with a nice easy swing to it. All went well on the assembly line until the chorus was played. Then pandemonium broke loose. The workers were so carried away by the spirit of the song that at the point where the chorus called for handclapping. they obliged automatically, dropping their tools to do so.