You can view Abe’s one and only patent here. 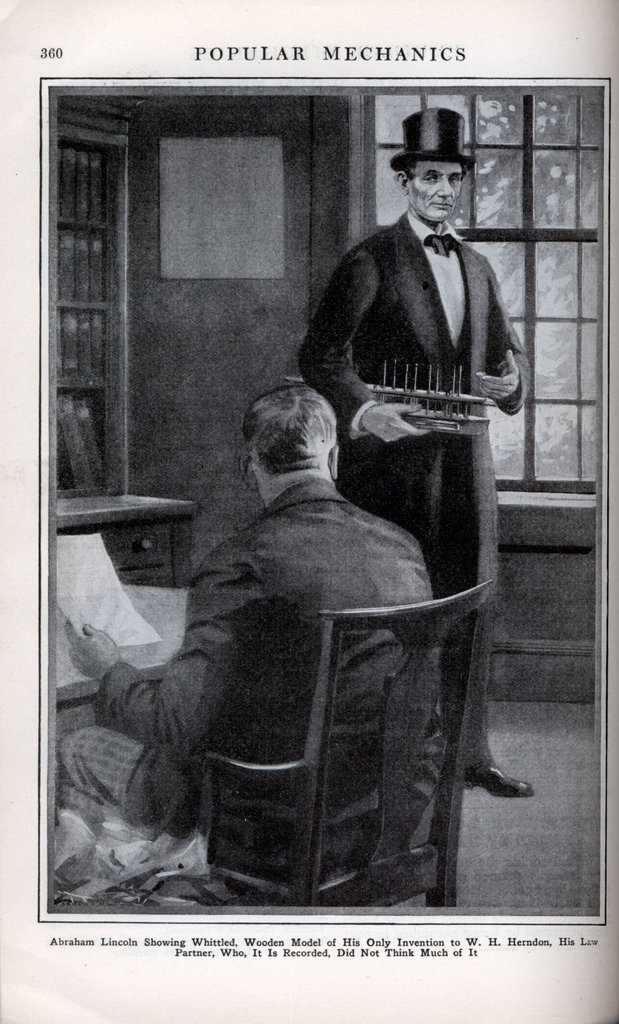 WHILE every schoolboy is familiar with the life of Abraham Lincolnâ€” a pioneer home, few books, hard labor at all the many trades of the frontiersman and the battle to save the Union and abolish slaveryâ€”few know that he also was an inventor.

To his genius as a statesman a united nation today bears witness, but only a rude model in the archives of the National Museum at Washington remains to give mute evidence that he possessed an inventive ability that alone, if followed, might have won him enduring fame.

Appearing as though it had been whittled out of a shingle and a cigar box, the model is about eighteen or twenty inches long, and bears the inscription: “6469, Abraham Lincoln, Springfield, Illinois. Improvement in method of lifting vessels over shoals. Patented May 22, 1849.”

The apparatus consisted of a bellows placed in each side of the hull of the craft, just below the water line, and worked by an odd, but simple, system of ropes and pulleys. When the keel grated against the sand or obstruction, the bellows were designed to be filled with air; and thus, buoyed up, the vessel was expected to float over the shoal.

It is declared that the idea for this device probably originated when he was twenty-one years old and started out for himself by contracting to build a flat-boat to take a few barrels of produce to New Orleans, for which he was to receive twelve dollars a month. Before beginning the journey, he split 400 rails for every yard of brown jeans dyed with white-walnut bark that were necessary to make him a pair of trousers.

After proceeding as far as New Salem, the crude craft stuck on a mill-dam and there for twenty-four hours it hung, the bow in the air and the stern in the water, the cargo slowly settling backwards and shipwreck almost certain. With most of the residents of the town looking on and shouting advice, Lincoln unloaded the boxes and barrels into a neighboring boat and tilted his craft. Then by boring a hole in the end extending over the dam, the water was let out. This done, the boat was shoved over and reloaded. Twenty years later he embodied this experience in the curious invention for getting vessels over shoals, the final inspiration resulting from a journey between Niagara Falls and his home in Springfield, Illinois.

On his way westward, the boat on which he made part of the trip was stranded in shallow water and had to be pried loose. First a large pole was driven into the mud and then a winch and rope were attached to it to pull the steamer free. When Lincoln reached home he began to build the model representing his idea, whittling at it in his law office while talking on its merits and the revolution it was going to work in river transportation. It is recorded that his partner, W. H. Herndon, did not think much of it and sought to discourage him.

But when the future president returned to his seat in congress, he took the miniature with him. “One morning he walked into my office with a model of a western steamboat under his arm,” said Z. C. Robbins, a lawyer, in describing the incident. “After a friendly greeting, he placed it on my desk and proceeded to explain the principles embodied therein that he believed to be his own invention, and on which, if new, he desired to secure letters patent. I speedily came to the conclusion that his idea was of value and procured a patent.”

Lincoln’s inventive ability and his interest in mechanics, however, were shown in many other ways. Although he himself said that he had never gone to school more than six months in his life, he fitted himself for a position as deputy surveyor in a few weeks by reading all the books he could find on the subject. According to tradition, he was too poor to buy a chain and, instead, used a long, straight grape vine. He also acted as pilot for the first steamer to make the trip from Beardstown to Springfield.

After he became president, and in the opening days of the civil war, the need for arms opened the way for inventors and Washington was overrun with men having guns to test. Mr. Lincoln took the greatest interest in these new arms and it sometimes happened that when an inventor could get nobody else in the government to listen to him, the president would personally test his gun. One such incident is told by a former clerk in the navy department. He accompanied Mr. Lincoln to the lawn south of the White House, where the president fixed up a target cut from a sheet of white congressional note paper.

“Then pacing off a distance of about eighty feet,” writes the clerk, “he raised the rifle to a level, took a quick aim and drove the round of seven shots in rapid succession, the bullets shooting all around the target like a gatling gun and one striking near the center.

“I believe I can make this gun shoot better said Mr. Lincoln, and took from his vest pocket a small wooden sight which he had whittled from a pine stick, and adjusted it over the sight of the carbine. He then shot two rounds and of the fourteen bullets, nearly a dozen hit the paper.”

Mr. Lincoln also interested himself in balloons and was one of the first persons in this country to receive a telegraphic message from a balloon sent up to make observations on an enemy’s works across the Potomac river.

During Lincoln’s career as a lawyer, he enjoyed particularly work in which mathematical or mechanical problems were involved. In 1855, he was retained as one of the counsel for John M. Manny, of Rockford, Ill., manufacturer of reaping machines, who had been sued by Cyrus H. McCormick, owner of patents granted in 1845 and 1847. If McCormick had been successful in his contentions, Manny would have been enjoined, his factory stopped and a claim of $400,000 damages demanded from his firm.

Another noted case involved the future of western commerce. A steamboat had struck one of the piers of a bridge built by the Rock Island railway across the Mississippi river and burned. The trial was a dramatic episode in the war long waged by the river men against the plains beyond. For decades the stream had been the willing burden-bearer of the west. Now, however, the railroad had come to carry the traffic which the river claimed. The boat men claimed that the great waterway could not legally be obstructed by a bridge.

Lincoln argued the case for the railroad, his speech being full of nice mathematical calculations designed to show that the accident was the fault of the pilot. The pith of his contention was that “one man had as good a right to cross a river as another had to sail up or down it.”

In this connection, he is said to have drawn a vivid picture of the future of the great west lying beyond the river, and argued that the necessities of commerce demanded that the bridge across the river be a conceded right. In this view he was sustained by the court’s decision.