This stuff looks like it was a hell of a lot harder before iMovie. 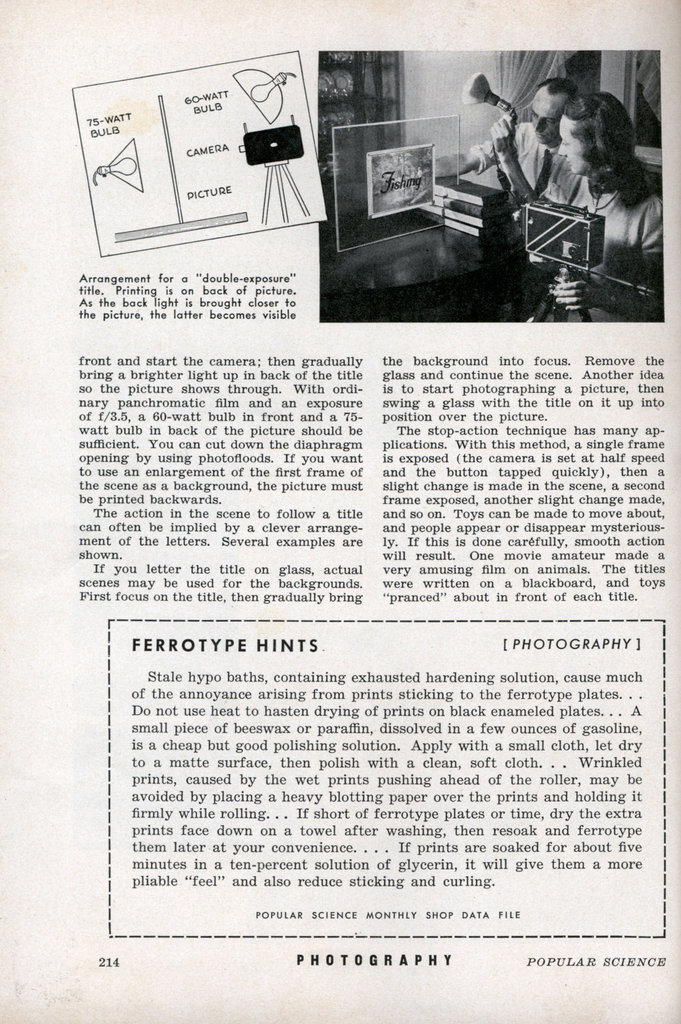 Action Titles Pep Up Your Movies

TITLES containing or implying action do much to improve home movies, and making them can be just as much fun as shooting regular scenes. You can easily devise many ingenious titles your audience will be certain to appreciate.

Taking a picture of a title upside down, then turning the piece of film around and splicing it so the action is reversed is an old trick, but one for which new variations are constantly being contrived by 16-mm. movie makers. Charles H. Taylor, of Chicago, suggests two such variations.

In the first, titles roll into the picture on movie-film reels. To perform this stunt, support a yardstick across the back of two chairs placed before a plain wall, and fasten pieces of cardboard to the thin edges of the stick. Let the edges of the cards extend above the surface of the stick about 1/8″ so as to form a shallow trough for the reels. The letters, which may be paper, metal, or plastic, are fastened to the reels with rubber cement, wax, or even chewing gum.

Place the reel or reels, as the case may be, so that the desired word or phrase is spelled upside down. Elevate one end of the yardstick slightly and place a toothpick or pin tied to a thread in front of the reel. Shoot the title long enough to record the word, then pull away the toothpick and the reel will roll out of the scene. When the film has been processed, splice in the title backwards.

Mr. Taylor’s second trick produces the effect of a revolving reel unwinding film that moves across the screen to spell out the title. Support a large piece of cardboard across a doorway or between chairs as shown. Starting with the first letter of the title, push long pins through from the back so they go through the track perforations and hold the film in place. The title must, of course, be upside down.

Wrap several layers of ad- , hesive tape around a pencil so the reel fits on it tightly and can be turned from the back. Arrange the lighting to cast shadows and thus give thickness to the letters. Number the pins on the back of the cardboard so your assistant knows in what order to pull them. Shoot the title long enough to be read, then start removing the pins and winding the film onto the reel.

Photographs, magazine illustrations, and even pieces of wall paper often provide appropriate backgrounds for titles. Sometimes an exceptional effect can be obtained by using an enlargement of the first frame of the scene. The audience then sees a title against an attractive back-ground which suddenly comes |T to life when the words disappear. Lighting of photographs must be done very carefully if they are to look realistic.

A “double-exposure” title can be obtained by printing (or typewriting) the wording on the back of a photograph made on single-weight paper. Illuminate the title from the front and start the camera; then gradually bring a brighter light up in back of the title so the picture shows through. With ordinary panchromatic film and an exposure of f/3.5, a 60-watt bulb in front and a 75-watt bulb in back of the picture should be sufficient. You can cut down the diaphragm opening by using photofloods. If you want to use an enlargement of the first frame of the scene as a background, the picture must be printed backwards.

The action in the scene to follow a title can often be implied by a clever arrangement of the letters. Several examples are shown.

If you letter the title on glass, actual scenes may be used for the backgrounds. First focus on the title, then gradually bring the background into focus. Remove the glass and continue the scene. Another idea is to start photographing a picture, then swing a glass with the title on it up into position over the picture.

The stop-action technique has many applications. With this method, a single frame is exposed (the camera is set at half speed and the button tapped quickly), then a slight change is made in the scene, a second frame exposed, another slight change made, and so on. Toys can be made to move about, and people appear or disappear mysteriously. If this is done carefully, smooth action will result. One movie amateur made a very amusing film on animals. The titles were written on a blackboard, and toys “pranced” about in front of each title.