This ad looks exactly like a real article in Popular Science. They do disclose that fact with the teeny tiny heading “Advertising” on the top of the page. My favorite part? The name of the school is the New York Technical Institute of New Jersey. I keep looking for N.Y.U‘s San Diego campus, but thus far, no luck. 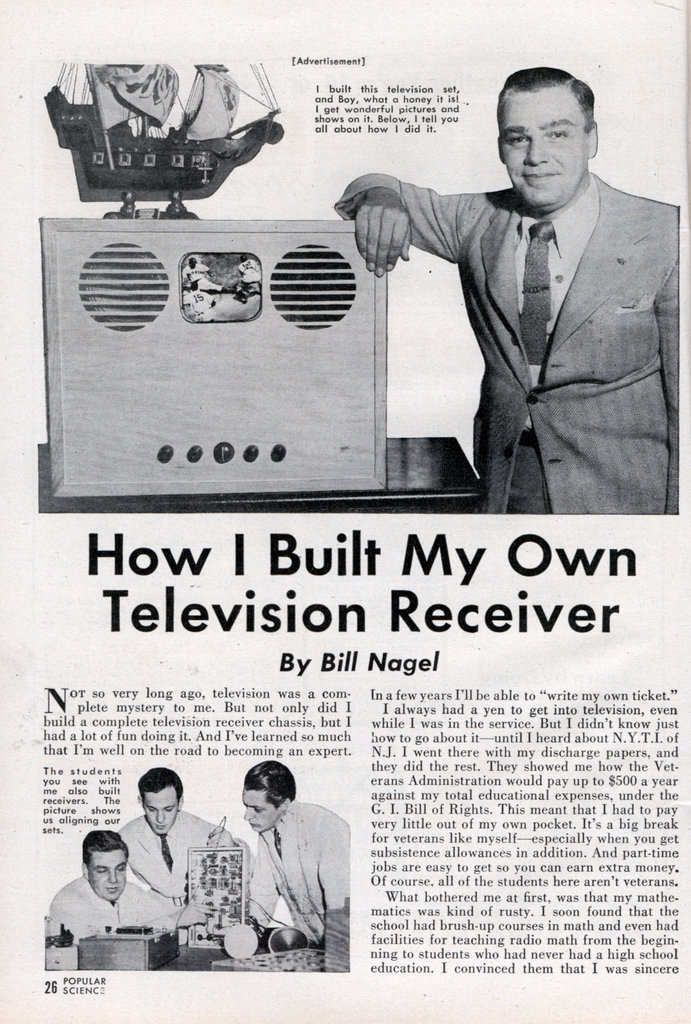 How I Built My Own Television Receiver

NOT so very long ago, television was a complete mystery to me. But not only did I build a complete television receiver chassis, but I had a lot of fun doing it. And I’ve learned so much that I’m well on the road to becoming an expert.

In a few years I’ll be able to “write my own ticket.” I always had a yen to get into television, even while I was in the service. But I didn’t know just how to go about itâ€”until I heard about N.Y.T.I, of N.J. I went there with my discharge papers, and they did the rest. They showed me how the Veterans Administration would pay up to $500 a year against my total educational expenses, under the G. I. Bill of Rights. This meant that I had to pay very little out of my own pocket. It’s a big break for veterans like myselfâ€”especially when you get subsistence allowances in addition. And part-time jobs are easy to get so you can earn extra money. Of course, all of the students here aren’t veterans.

What bothered me at first, was that my mathematics was kind of rusty. I soon found that the school had brush-up courses in math and even had facilities for teaching radio math from the beginning to students who had never had a high school education. I convinced them that I was sincere and enthusiastic and that I was technically inclined, and so I became a student. You know, you just can’t build a television set right off. I built seven radio sets and had to go through a total of 75 electronic experiments, before they would even let me start on a television receiver.

Then I began work in earnest. The instructors around here have plenty on the ball, and it was amazing how fast I progressed. Boy, school was never like this. You should see the magnificent equipment. There’s a swell gang here. They come from all over, because practical television schools are hard to find, and N.Y.T.I, of N.J. has a wonderful rep when it comes to television. I don’t believe that you can find better training anywhere.

Another thing I like about N.Y.T.I. of N.J. (New York Technical Institute of New Jersey) is the convenient location. It’s right in the heart of America’s electronic industry, (Newark, N. J.), only 19 minutes from New York City. Big radio, television and electronics manufacturers are nearbyâ€”like RCA, General Electric and Edison. So are the big network stations like WJZ. WEAF and WOR. This means that the school is always right in touch with the latest evelopments.

The conditions here are ideal. They have thousands and thousands of dollars worth of the latest types of equipment. There is a great deal of individual instruction and the instructors know their business.

I am sure there are a lot of fellows, particularly veterans, who want to get into this field. I understand there are about 120 openings now for new day students in the classes beginning this November and December. If you want the complete dope about the school, you can have a free bulletin, which illustrates and describes its facilities and equipment. It also tells the classes that may be attended, housing conditions, costs, hours, etc. There is no charge for this bulletin. Just ask for Bulletin 311. Send your postcard or letter to the New York Technical Institute of New Jersey, 158 Market Street, Newark, N. J.