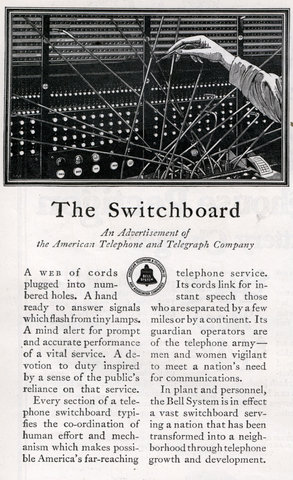 The Switchboard
An Advertisement of the American Telephone and Telegraph Company

A web of cords plugged into numbered holes. A hand ready to answer signals which flash from tiny lamps. A mind alert for prompt and accurate performance of a vital service. A devotion to duty inspired by a sense of the public’s reliance on that service. Every section of a telephone switchboard typifies the co-ordination of human effort and mechanism which makes possible America’s far-reaching telephone service. Its cords link for instant speech those who areseparated by a few miles or by a continent. Its guardian operators are of the telephone armyâ€” men and women vigilant to meet a nation’s need
for communications.

In plant and personnel, the Bell System is in effect a vast switchboard serving a nation that has been transformed into a neighborhood through telephone growth and development.