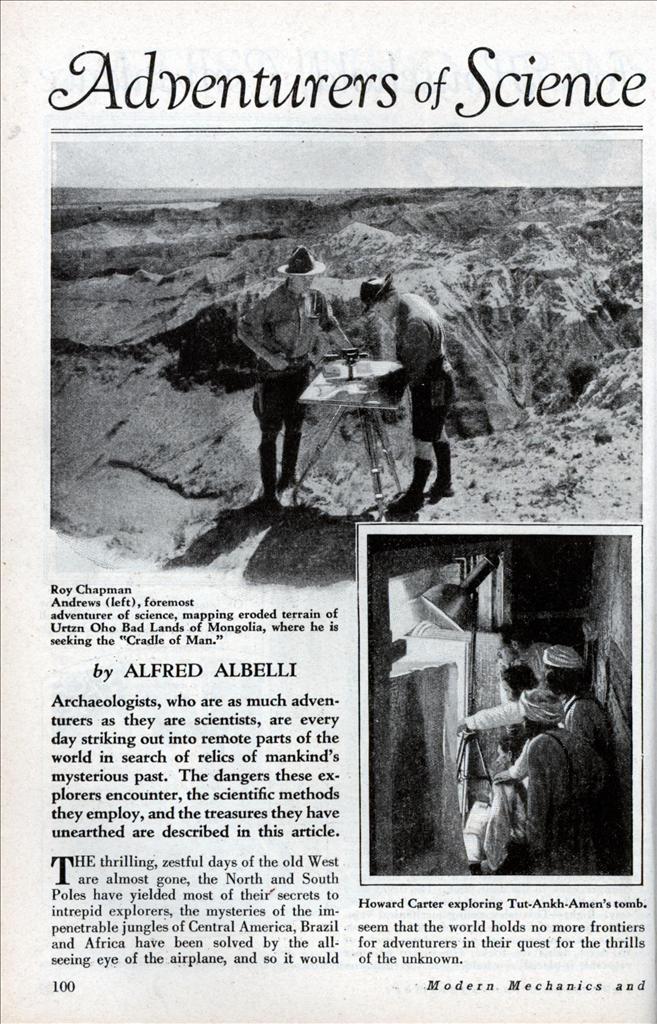 Adventurers of Science Explore Mankind’s Past

Archaeologists, who are as much adventurers as they are scientists, are every day striking out into remote parts of the world in search of relics of mankind’s mysterious past. The dangers these explorers encounter, the scientific methods they employ, and the treasures they have unearthed are described in this article.

THE thrilling, zestful days of the old West are almost gone, the North and South Poles have yielded most of their secrets to intrepid explorers, the mysteries of the impenetrable jungles of Central America, Brazil and Africa have been solved by the all-seeing eye of the airplane, and so it would seem that the world holds no more frontiers for adventurers in their quest for the thrills of the unknown.

But modern adventurers need not despair, for the science of archaeology, bent upon solving the mysteries of mankind’s past, is now pointing the way to new frontiers in remote regions of the world where buried and long-forgotten cities of antiquity are yielding to stout hearted explorers a rich harvest of thrills and treasures that are inexhaustible.

Employing every resource of modern science available for their purpose, venturesome archaeologists are digging in the bowels of the earth and bringing to the light of day the lore and relics of ancient civilizations, which flourished thousands of years ago and whose secrets are now being read.

Why is work of this kind being carried on? There is an intense fascination in seeing how mankind lived back in the remote beginnings of the world. Even the most modern and sophisticated person feels a certain astonishment and keen appreciation when some beautiful and precious object, last used some fifty centuries ago, is placed in his hand.

Thanks to the patient labors of adventurous archaeologists, we know far more today how men lived in the remote past, what were their beliefs, their culture, their sports, their wars and intrigues, than the generations that followed them ever knew. What Egypt taught Greece about warfare, navigation, and industry, what the conquering Romans learned from the Greeks in the way of architecture, government and athletics, and what our modern civilization owes to all these nations of antiquity, has been slowly gathered from the graves and ruins that they left.

In recent months excavators digging in the ruins of Pompeii, Italy, a famous city whose life was suddenly snuffed out by a fiery rain of lava from Vesuvius centuries ago, came upon a group of gold and silver objects worth over $1,000,000.

From other corners of the earth comes the news of discoveries that have roused intense enthusiasm in explorers and their sponsors. The diggers of ancient lore, it seems, are in for a bull market. It has been conservatively estimated by H. Phelps Clawson, the noted excavator, who aided in bringing to light the tomb of Tut-Ankh-Amen eight years ago after it had lain hidden from civilization for over 3,000 years, that the year 1931 would see over $50,000,000 expended to unearth the secrets of bygone centuries.

Mr. Clawson also declared that the possibilities for improvement in the mechanical aids used to penetrate to the hidden vaults of antiquity were limitless.

“The amount of money required to carry out such a work,” he said, “depends upon where you are working and the size of the staff you maintain. An expedition in a fairly permanent location will need an equipment consisting of dump-cars, yards of track, engineering implements, chemicals for pre- serving the finds, photographic supplies, and a thousand and one things that are used in scientific research.

In connection with the discovery of the tomb of Tut-Ankh-Amen, Howard Carter, another eminent archaeologist who figured conspicuously in its discovery, announced recently that the tomb of that Egyptian monarch had been thrown open to the public as the last gesture in one of science’s greatest adventures. Ironically, the Earl of Carnarvon, the leader of the Tut-Ankh-Amen expedition, perished in the midst of operations.

Turning eastward from the Valley of the Tombs of the Kings, we find that the diggers are as busy as beavers unearthing the tombs of the ancient kings of Ur, and on other sites in the Tigris-Euphrates valley.

The joint expedition of the British Museum and the Museum of the University of Pennsylvania not long ago brought to light the burial places of three kings of Ur. Horace H. F. Jayne, director of the Pennsylvania museum described this site as the most monumental ruins in Mesopotamia. The oldest of the tombs date back about 4,300 years.

Mr. Jayne pointed out that the expedition had centered its attention upon these tombs at Ur for nine seasons. The excavation was made difficult, he said, because the enormous mudbrick walls which Nebuchadnezzar built around the sacred area ran directly across the site and had to be dug through.

“Below these,” he went on to say, “are also private houses of about the twentieth century B. C, and it is only when they have been cleared away that we can lay bare the work of the third dynasty of Ur. Some of the buildings have solid walls of burnt brick laid in bitumen, with square and rounded buttresses along the outer face.”

Some of the resourcefulness of these diggers, in combining science and mechanical skill and ingenuity, may be gleaned from the recent operations carried out on the site of an ancient Greek settlement called Chersonese, and described in the writings of Strabo, a Greek geographer.

A group of Russian archaeologists, baffled after months of excavating on what they had divined to be the site of Chersonese, decided to look under the sea, near the modern Crimean city of Sevastopol for the long-lost city. This was after fishermen had spread tales of a wonderful submarine city off the coast of Sevastopol.

It was then that scientists set to work with divers and giant searchlights. Their quarry was located 200 feet offshore. The city has been completely submerged and the divers found a semi-circular wall, a market-place, crumbling houses and a small amount of treasures. The reclaimed city flourished over 2,000 years ago and is believed to have been sent to the bottom of the sea by the violent earthquakes of 480 A. D. Millions of dollars of diggers’ plunder lurks in old Chersonese and engineers are making plans for recovering it.

Athens, which has felt the restless onslaught of the steam shovel and spade for generations, has been girding herself for another attack this summer. Last winter the American School of Classical Studies secured, the condemnation of thirty buildings on the Athenian agora, as the market-place is called, preparatory to excavations there. Perhaps another Acropolis group will be found. Millions will be spent to inquire into the mysteries which “this site conceals—and perhaps the reward will net many millions of dollars more.

For the person, or group of persons, who seek adventure through the quest of subterranean treasure or lore, the realm over which he may roam is still virgin territory. Despite the vast sums of wealth which have been gathered since one of Napoleon’s lieutenants found the Rosetta Stone near the Nile River in 1799, thereby offering a key to rich domains of scientific data and jewels, because it made possible the translation of the -Egyptian language of the ancients, there still abound vast, untapped kingdoms.

A proof of the inexhaustible source of this ancient treasure-trove may be found in the excavations of the Egypt Exploration Society of London. It has 350 men at work in Upper Egypt. Among this group is Gilbert D. Phillips, an American student who sought this particular brand of adventure. Only a short time ago he unearthed a jar containing twenty-three small bars of pure gold with a market value of about $5,000.

In Lake Nemi, near Rome, two pleasure galleys of the Emperor Caligula have already been located. Through drainage operations.

conducted by the Fascist government in 1928, one galley has already been recovered. Professor Ugo Antoniello in charge of the archaeological operations, has announced that he will bring a third one of Caligula’s luxurious galleys into view. They disappeared 900 years ago.

Last January considerable furore was caused when Dr. E. L. Sudenik, a member of the faculty of Hebrew University, Jerusalem, announced that a tomb had been discovered at Jerusalem which bore the Aramaic inscription, “Jeshua Bar Jehoseph,” meaning, “Jesus, Son of Joseph.” Investigations were started to ascertain whether this was the tomb of Christ. Although it did not prove to be, the pages of archaeologist’s story is replete with instances where their excavations gave proof to Biblical statements.

Although science has been endeavoring for centuries to locate the cradle of civilization, striving to determine the definite beginnings of human evolution, diggers in deserts, caves, plains, pits, mounds and other sites are constantly turning up evidence to overthrow the orthodox scientific beliefs concerning the beginning of man.

Today there are scores of excavators in the Orient seeking the secrets of man’s origin. These diggers find their reward not in the golden-wares of other ages which they might unearth but in scientific discoveries they might make concerning the history of man. Similar work is going on in the Holy Land.

When one trains the attention on the operations of these men, one does not reckon with centuries but with cycles of thousands of years. For instance, in Montana a Princeton University expedition of scientists uncovered dinosaur eggs believed to have been laid 50,000,000 years ago.

Arizona has also been designated as the habitat of creatures which roamed the face of this globe millions of years ago. Roy Chapman Andrews found similar types of eggs, and even older ones, in Mongolia seven years ago.

Not long ago Dr. James A. B. Scherer, director of the Southwest Museum, announced that traces of man had been found in Gypsum Cave, near Las Vegas, Nevada. It had been previously believed that man had not inhabited North America until 10,000 years ago.