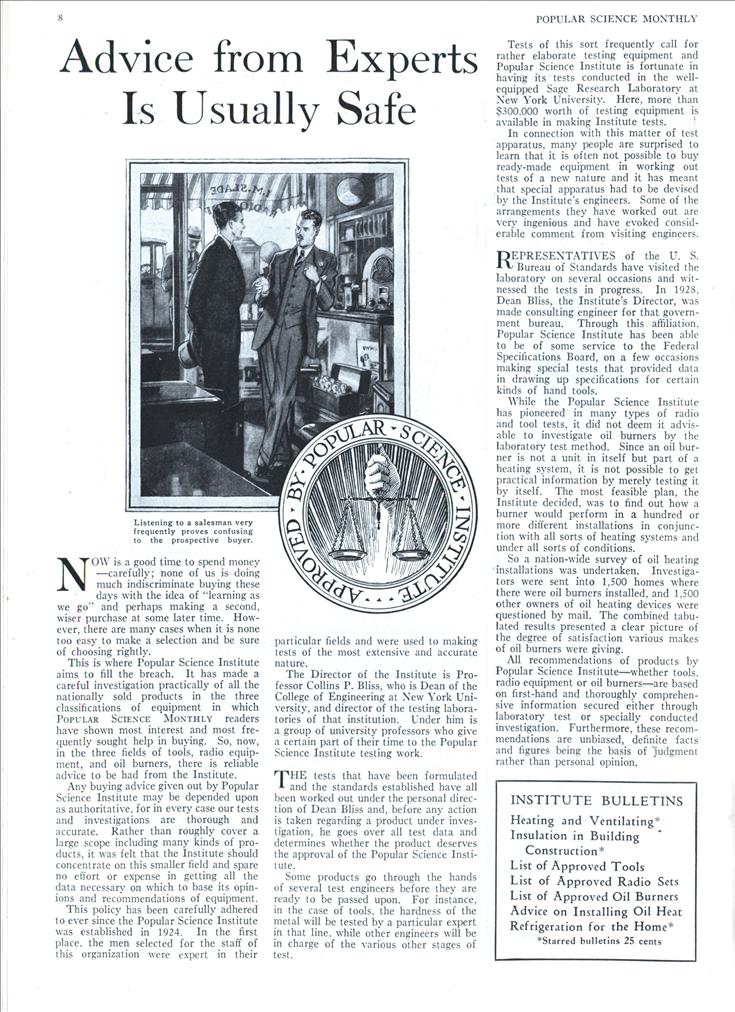 Advice from Experts Is Usually Safe

NOW is a good time to spend money —carefully; none of us is doing much indiscriminate buying these days with the idea of “learning as we go” and perhaps making a second, wiser purchase at some later time. However, there are many cases when it is none too easy to make a selection and be sure of choosing rightly.

This is where Popular Science Institute aims to fill the breach. It has made a careful investigation practically of all the nationally sold products in the three classifications of equipment in which Popular Science Monthly readers have shown most interest and most frequently sought help in buying. So, now, in the three fields of tools, radio equipment, and oil burners, there is reliable advice to be had from the Institute.

Any buying advice given out by Popular Science Institute may be depended upon as authoritative, for in every case our tests and investigations are thorough and accurate. Rather than roughly cover a large scope including many kinds of products, it was felt that the Institute should concentrate on this smaller field and spare no effort or expense in getting all the data necessary on which to base its opinions and recommendations of equipment.

This policy has been carefully adhered to ever since the Popular Science Institute was established in 1924. In the first place, the men selected for the staff of this organization were expert in their particular fields and were used to making tests of the most extensive and accurate nature.

The Director of the Institute is Professor Collins P. Bliss, who is Dean of the College of Engineering at New York University, and director of the testing laboratories of that institution. Under him is a group of university professors who give a certain part of their time to the Popular Science Institute testing work.

THE tests that have been formulated and the standards established have all been worked out under the personal direction of Dean Bliss and, before any action is taken regarding a product under investigation, he goes over all test data and determines whether the product deserves the approval of the Popular Science Institute.

Some products go through the hands of several test engineers before they are ready to be passed upon. For instance, in the case of tools, the hardness of the metal will be tested by a particular expert in that line, while other engineers will be in charge of the various other stages of test.

Tests of this sort frequently call for rather elaborate testing equipment and Popular Science Institute is fortunate in having its tests conducted in the well-equipped Sage Research Laboratory at New York University. Here, more than $300,000 worth of testing equipment is available in making Institute tests.

In connection with this matter of test apparatus, many people are surprised to learn that it is often not possible to buy ready-made equipment in working out tests of a new nature and it has meant that special apparatus had to be devised by the Institute’s engineers. Some of the arrangements they have worked out are very ingenious and have evoked considerable comment from visiting engineers.

Representatives of the U.S. Bureau of Standards have visited the laboratory on several occasions and witnessed the tests in progress. In 1928, Dean Bliss, the Institute’s Director, was made consulting engineer for that government bureau. Through this affiliation. Popular Science Institute has been able to be of some service to the Federal Specifications Board, on a few occasions making special tests that provided data in drawing up specifications for certain kinds of hand tools.

While the Popular Science Institute has pioneered in many types of radio and tool tests, it did not deem it advisable to investigate oil burners by the laboratory test method. Since an oil burner is not a unit in itself but part of a heating system, it is not possible to get practical information by merely testing it by itself. The most feasible plan, the Institute decided, was to find out how a burner would perform in a hundred or more different installations in conjunction with all sorts of heating systems and under all sorts of conditions.

So a nation-wide survey of oil heating installations was undertaken. Investigators were sent into 1,500 homes where there were oil burners installed, and 1,500 other owners of oil heating devices were questioned by mail. The combined tabulated results presented a clear picture of the degree of satisfaction various makes of oil burners were giving.

All recommendations of products by Popular Science Institute—whether tools, radio equipment or oil burners—are based on first-hand and thoroughly comprehensive information secured either through laboratory test or specially conducted investigation. Furthermore, these recommendations are unbiased, definite facts and figures being the basis of judgment rather than personal opinion.