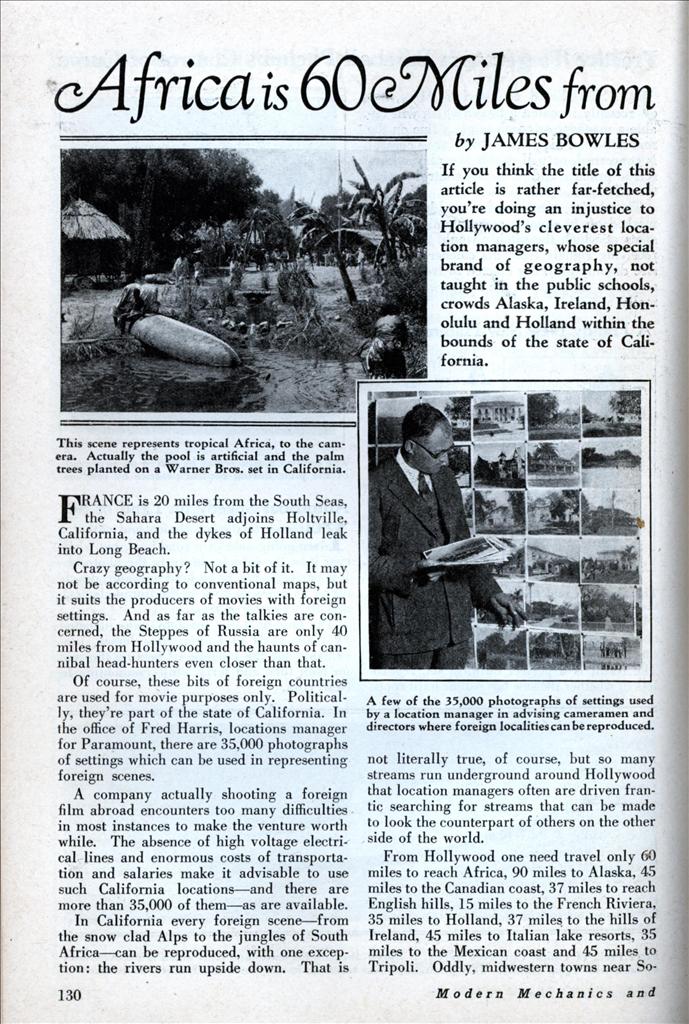 Africa is 60 Miles from Hollywood (in the movies)

If you think the title of this article is rather far-fetched, you’re doing an injustice to Hollywood’s cleverest location managers, whose special brand of geography, not taught in the public schools, crowds Alaska, Ireland, Honolulu and Holland within the bounds of the state of California. FRANCE is 20 miles from the South Seas, the Sahara Desert adjoins Holtville, California, and the dykes of Holland leak into Long Beach.

Crazy geography? Not a bit of it. It may not be according to conventional maps, but it suits the producers of movies with foreign settings. And as far as the talkies are concerned, the Steppes of Russia are only 40 miles from Hollywood and the haunts of cannibal head-hunters even closer than that.

Of course, these bits of foreign countries are used for movie purposes only. Politically, they’re part of the state of California. In the office of Fred Harris, locations manager for Paramount, there are 35,000 photographs of settings which can be used in representing foreign scenes.

A company actually shooting a foreign film abroad encounters too many difficulties in most instances to make the venture worth while. The absence of high voltage electrical lines and enormous costs of transportation and salaries make it advisable to use such California locations—and there are more than 35,000 of them—as are available.

In California every foreign scene—from the snow clad Alps to the jungles of South Africa—can be reproduced, with one exception: the rivers run upside down. That is not literally true, of course, but so many streams run underground around Hollywood that location managers often are driven frantic searching for streams that can be made to look the counterpart of others on the other side of the world.

Victorville, in San Bernardino county, probably has been the background for as many exterior movie scenes as any other city in the world. Without moving the cameras other than to turn them around, there may be recorded on celluloid vistas of green fields, a river bordered with densely growing trees, and desert with drifting sands and sage brush and Joshua trees (desert palms). Nearby, the same cameras may record dry lakes and pyramid-like buttes which give an Egyptian touch, and valleys bordered by towering mountains. During the winter Alpine snow scenes are available.

But how are these locations found?

Suppose a studio should decide on a picture with the locale to be laid in France. An assistant director calls the location manager.

“This is Bill Blank speaking, George. We must have a French location next Monday; the French Riviera. What have you close by?”

This is an easy one for the location manager, who will reply, “French Riviera is 30 minutes from the studio at the Santa Monica palisades. Good bye”.

Another phone rings. A second assistant-director wants exteriors on the Sahara desert, and the location manager sends him to the Imperial Valley.

Another assistant director wants the locale in the South Seas. He is directed to the isthmus on Catalina Island, or the crescent-curved, rock-bound Laguna beach.

In Hollywood and on nearby locations pageants of all nations and all times are produced. Recently on two movie “ranches”— so called only because they were large areas of land outside the city—I witnessed the filming of a street battle during the French revolution, and of a Chinese town hard by a river bank. In both cases from the “camera angle” along side the cameraman I could see the hills of North Hollywood forming the skyline behind the scenes.

As the “shooting” of the Chinese pictures continued, on a nearby set, perched on the dry branches of a papier-mache tree, a sparrow warbled its greetings to the spring.

Without painstaking research, no foreign picture of consequence could be filmed in California; and without much greater expense than the run-of-the-mill picture warrants, a company cannot be carried to a foreign country. Therefore, research specialists, writers, photographers, and, in some cases, engineers visit foreign scenes and record in picture and drawing those scenes to be reproduced.

In preparing for the “Call of the Flesh” a scenarist spent six months in Spain, gathering atmospheric material—and searching for a Spanish police-patrol of about eighty years ago. When it finally was located, the patrol proved to be a small one-horse wagon with a simple iron cage on top. But the vehicle belonged to a museum and could not be sent to Hollywood. So the scenarist made exact measurements, sketched the patrol from various angles and wrote a complete description so it could be reproduced. Later, when it was shown in the Seville market place none could have distinguished it from the original.

Research staffs of the studios not only must pass on the California scene where the picture is to be filmed, but must decide upon the authenticity of every prop and setting to be used. They even censor the dialogue and music in order that nothing will be used which might offend a theatre patron in some country. Their principal difficulties come in reproducing authentic obsolete objects, such as uniforms, armor and clothing. Yet a good research director never will admit defeat.

“We never yet have been forced to send back word that we have failed,” declared Miss Natalie Bucknell, head of the research department for Metro-Goldwyn-Mayer. “Recently a director called for photographs of the seven wonders of the world—and he wanted them in 24 hours. Ordinarily I should have searched many volumes to find them, but I remembered having seen plates of these in a child’s book. So I sent them back with the same messenger. Some day, one of the seven wonders will rise on a southern California location and be filmed amid familiar surroundings.

“We must be very careful in dealing with customs, costumes, locales and historical events. We cannot use certain words. In the United States ‘bum’ and ‘lousy’ signify meanings so entirely different from their construction in England, that we cannot use them in an English picture. That is one reason we prefer technical advisers from the country to be represented in a foreign film.”

In viewing a picture involving Alpine snow scenes or the Sahara desert, your mind follows your eye. Seldom do you examine the picture for incorrect details, and seldom will inaccuracies creep in. And there’s a reason. The research department painstakingly arranges those details.

“What are the most difficult questions you have been called on to settle?” I asked Miss Bucknell.

“Oddly,” she replied, “these have not had to do with locations. Recently a director sent up a sheet of paper with two queries: ‘What is the uniform worn by postmen in the capital of Iceland? And, how are corpses of persons of the Lutheran faith laid out in Germany?’ Odd? Possibly. But it is of supreme importance that the letter carrier wear the correct cap and have the correct number of buttons on his coat, and that the corpse be laid out properly, or we’ll begin to receive uncomplimentary fan letters pointing out our errors.”

Another difficult problem comes in reproducing foreign prison scenes, foreign courtrooms, jails, etc. For years one studio has been making consistent efforts to obtain a series of pictures showing the interior of Scotland Yard. The Ritz bar in Paris was another much-sought scene. After many efforts the Parisian representative of one large film company, using methods he would not reveal, sent the pictures to Hollywood.

A recent picture shows actors at the British Foreign office. This was correctly reproduced, even to cobblestones on the street, from photos and drawings. When George Arliss played “Disraeli,” the English garden scenes were filmed at the famous Busch garden at Pasadena. Night jungle scenes for another picture were “shot” on a Los Angeles estate. And when the snow melted away from a Russian mountain scene, the company returned to Hollywood and completed the close-ups, using gypsum for ice and a painted curtain to represent the snow-laden trees in the background.

One script called for scenes to be laid on islands bordering the South Seas. “Prop” palms were planted in a cove on Catalina island, carpenters built high prows and repainted several canoes, and 200 Hollywood extras, blacked with grease paint, took spears in their hands and became man-eating warriors. Yet you would not have known, in viewing the picture, that the scene was nearly 100 percent “movie made”.

South Seas in California For another picture an actor was shown on the floor of the ocean near a South Seas island. In fact, he did descend to the ocean’s bottom and was filmed with a special camera. But the waving sea grasses were “planted” there to resemble the floor several thousand miles further south.

On another occasion a technical expert spent several months in England collecting data for the reproduction of scenes in London’s Mayfair, and particularly for a sequence showing an Oxford-Cambridge boat race. During this time a director flew daily in a fast airplane over southern California seeking locations. Finally the boat race was pictured near San Pedro.

While it costs only one-twentieth as much to film a foreign scene in sunny California as it would to transport a company of possibly 2,000 to the country depicted, sometimes the physical difficulties try the mettle of actors and technicians. No African desert could burn any hotter than the Imperial Valley. In fact, it sometimes becomes necessary to lighten the complexion of actors after the Imperial sun has baked them two weeks. And summer storms and winter snows sometimes chase them back to Hollywood or freeze them in, in some mountain “Russia” or “Siberia”.