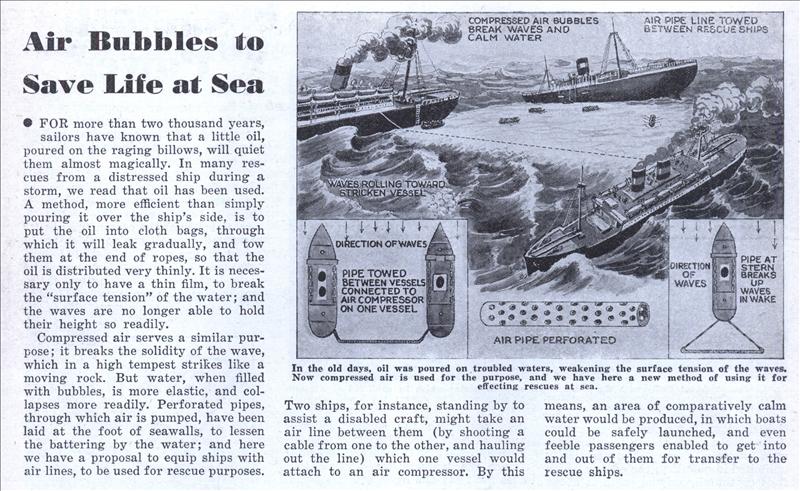 Air Bubbles to Save Life at Sea

FOR more than two thousand years, sailors have known that a little oil, poured on the raging billows, will quiet them almost magically. In many rescues from a distressed ship during a storm, we read that oil has been used. A method, more efficient than simply pouring it over the ship’s side, is to put the oil into cloth bags, through which it will leak gradually, and tow them at the end of ropes, so that the oil is distributed very thinly. It is necessary only to have a thin film, to break the “surface tension” of the water; and the waves are no longer able to hold their height so readily.

Compressed air serves a similar purpose ; it breaks the solidity of the wave, which in a high tempest strikes like a moving rock. But water, when filled with bubbles, is more elastic, and collapses more readily. Perforated pipes, through which air is pumped, have been laid at the foot of seawalls, to lessen the battering by the water; and here we have a proposal to equip ships with air lines, to be used for rescue purposes.

Two ships, for instance, standing by to assist a disabled craft, might take an air line between them (by shooting a cable from one to the other, and hauling out the line) which one vessel would attach to an air compressor. By this means, an area of comparatively calm water would be produced, in which boats could be safely launched, and even feeble passengers enabled to get into and out of them for transfer to the rescue ships.