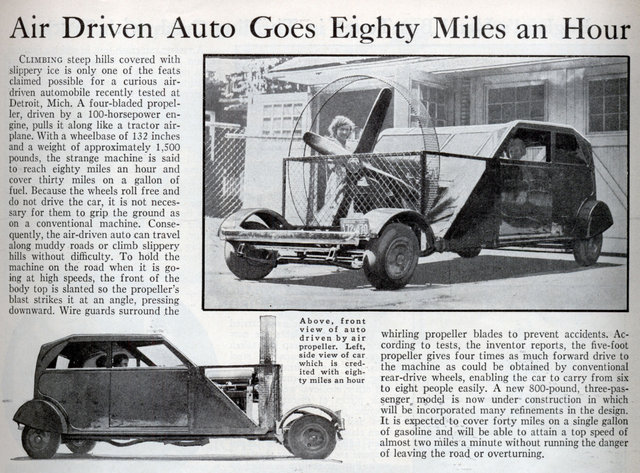 Air Driven Auto Goes Eighty Miles an Hour
Climbing steep hills covered with slippery ice is only one of the feats claimed possible for a curious air-driven automobile recently tested at Detroit, Mich. A four-bladed propeller, driven by a 100-horsepower engine, pulls it along like a tractor airplane. With a wheelbase of 132 inches and a weight of approximately 1,500 pounds, the strange machine is said to reach eighty miles an hour and cover thirty miles on a gallon of fuel. Because the wheels roll free and do not drive the car, it is not necessary for them to grip the ground as on a conventional machine. Consequently, the air-driven auto can travel along muddy roads or climb slippery hills without difficulty. To hold the machine on the road when it is going at high speeds, the front of the body top is slanted so the propeller’s blast strikes it at an angle, pressing downward. Wire guards surround the
whirling propeller blades to prevent accidents. According to tests, the inventor reports, the five-foot propeller gives four times as much forward drive to the machine as could be obtained by conventional rear-drive wheels, enabling the car to carry from six to eight people easily. A new 800-pound, three-passenger model is now under construction in which will be incorporated many refinements in the design. It is expected to cover forty miles on a single gallon of gasoline and will be able to attain a top speed of almost two miles a minute without running the danger of leaving the road or overturning.