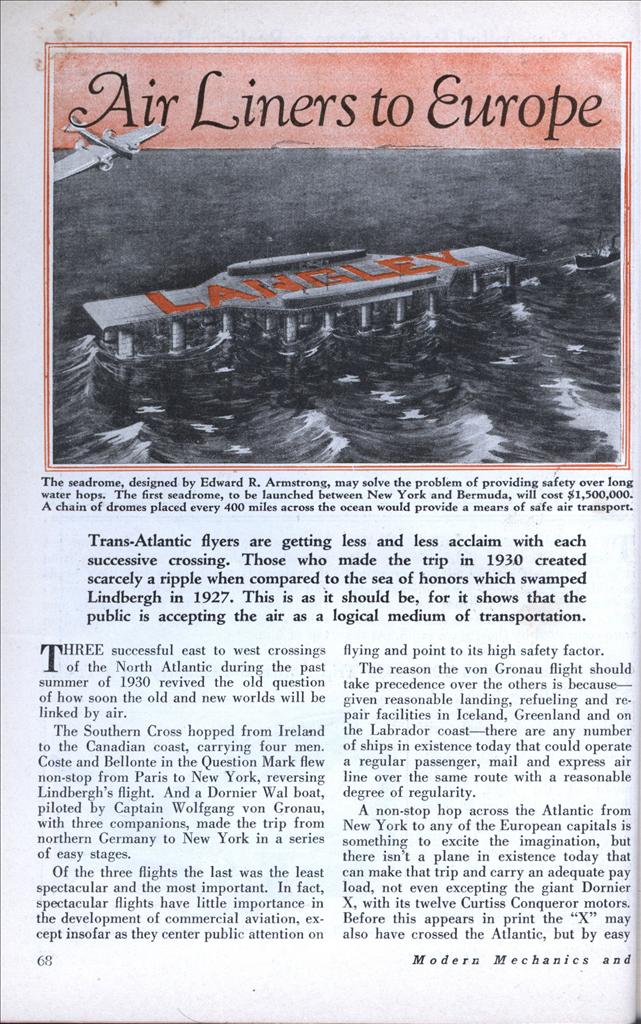 Air Liners to Europe ~ How Soon

Trans-Atlantic flyers are getting less and less acclaim with each successive crossing. Those who made the trip in 1930 created scarcely a ripple when compared to the sea of honors which swamped Lindbergh in 1927. This is as it should be, for it shows that the public is accepting the air as a logical medium of transportation.

THREE successful east to west crossings of the North Atlantic during the past summer of 1930 revived the old question of how soon the old and new worlds will be linked by air.

The Southern Cross hopped from Ireland to the Canadian coast, carrying four men. Coste and Bellonte in the Question Mark flew non-stop from Paris to New York, reversing Lindbergh’s flight. And a Dornier Wal boat, piloted by Captain Wolfgang von Gronau, with three companions, made the trip from northern Germany to New York in a series of easy stages.

Of the three flights the last was the least spectacular and the most important. In fact, spectacular flights have little importance in the development of commercial aviation, except insofar as they center public attention on flying and point to its high safety factor.

The reason the von Gronau flight should take precedence over the others is becauseâ€” given reasonable landing, refueling and repair facilities in Iceland, Greenland and on the Labrador coastâ€”there are any number of ships in existence today that could operate a regular passenger, mail and express air line over the same route with a reasonable degree of regularity.

A non-stop hop across the Atlantic from New York to any of the European capitals is something to excite the imagination, but there isn’t a plane in existence today that can make that trip and carry an adequate pay load, not even excepting the giant Dornier X, with its twelve Curtiss Conqueror motors. Before this appears in print the “X” may also have crossed the Atlantic, but by easy stages from Germany to Portugal, to the Azores, Bermuda and New York. And even to make that hop, from Lisbon to the Azores and the Azores to Bermuda, it was necessary to remove a large part of the passenger carrying facilities of this aerial giant, which has carried 170 people into the air and is regularly fitted with seats for seventy, and substitute extra gas and oil tanks.

The “X” is a marvelous creation for the work for which it was built, carrying a large pay load on comparatively short hops of around 600 miles, such as an air line from New York to Bermuda. But beyond that distance the gas consumption of its twelve great motors requires such a sacrifice of pay load space as to render its operation impractical.

That is why the route blazed by von Gronau, and twice attempted in the opposite direction by American planesâ€”one a Stinson land craft and the other a Sikorsky amphibianâ€”is attracting the attention of aviation leaders in both continents. With proper facilities along the route, and using two land planes and a flying boat or amphibian, it offers possibilities for regular operation with existing aircraft.

From New York to Chicago fast air liners could transport passengers, mail or express, to a flying field on the Labrador coast. Transfering there to a flying boat, the next ho would be to a sheltered harbor on the south coast of Greenland, and from there to Iceland and either the Orkney Islands or northern Scotland. Another land plane from there would connect with all the continental air lines at London, or, for northern Europe, a line could run from the Orkneys to Berlin or the Scandinavian capitals. Nature, in laying out the land masses of the world, seems to have provided an ideal round the world route in the northern hemisphere. Few landsmen, brought up on the Mercator projections used in school geographies and other flat maps, realize its possibilities. For example, the shortest distance between Berlin and Mexico City is a line passing through Chicago. The shortest route from Chicago to Tokio is a line passing through Winnipeg, Canada and Nome, Alaska. You can prove that, if you have a globe, by taking a piece of string, holding one end at Chicago and stretching the string to Tokio.

That’s what the mariner and the aerial navigator call a great circle course. A great circle is a line passing around the world and the shortest distance between any two points will be the great circle passing through both of them.

“Shorty” Cramer, who, with Bert Hassell, attempted to fly to Europe by way of Greenland, a few years ago, and was forced down on the Greenland ice cap when they lost their way and failed to find their gas cache, hopped up to Nome in a Cessna a year or so ago and jumped over to Siberia to survey the possibilities of that air route. Even in late winter he found no obstacles to a regular air line. From the Siberian coast down to Vladivostok offers no particular obstacles, and from there to Moscow and Berlin the route has been flown many times.

This round the world northern route is mostly land, with the longest sea hop not more than 600 miles. There is a short jump across the Bering straits between Alaska and Siberia, and the sea hops from Labrador to Greenland, Iceland and Scotland.

The financial slump last year hit the newly flourishing air transport and airplane manufacturing business probably harder than any other line. And partly because of that condition airplane design has begun to lag behind the possibilities of aerial transport.

Rear Admiral Byrd, addressing the aircraft trade at the annual banquet of the National Aeronautical Association just before the Air Races at Chicago brought that point forcibly home.

“I have been away two years,” he said in effect, “and I came home from the South Pole that much behind in the development of aviation. But I found most of the air lines still using virtually the same Ford ships I flew to the North Pole three years ago and the same Fokkers I flew to the South Pole last year. In big transport ships there has been virtually no development, and, unless the manufacturer can show some reason for continuing with the present tri-motored craft, which are admittedly less than 50 per cent as efficient as a single motor job, he should seek development along some other line.

“If some manufacturer will produce a fast transport with engines in the wing and retractible landing gear, virtually a flying wing, I have a use for it right now and am ready to order the first one.”

Most manufacturers of high speed planes this year have sought to cut down the drag of the landing gear by fitting streamlined “pants” over the wheels. A safe and efficient retractible landing gear would be a great step further. At the 1930 air races there were two things of especial interest shown. One was a ship fitted with a reversible propeller, to check the landing speed of the ship and enable it to be backed on the ground. The other was a variable wing ship, a low-wing monoplane equipped with hydraulic cylinders enabling the wings to be raised or lowered in flight, changing the dihedral, and at the same time the angle of incidence.

Of still more importance will be the development of a practical variable pitch propeller and variable chord wing. When those come the airplane will have different speeds or weight lifts and can be geared for the job just like an automobile.

The Schroeder – Wentworth plane which was built for the Guggenheim competition, but which crashed owing to a fault in construction, had both those things.

The propeller could be set for high pitch to get the load off the ground, and then changed to low pitch for high speed in flight. At the same time the chord of the wing could be changed, using a thick, weight-lifting wing to get off the ground, and gradually changing to a thinner, high speed wing in flight. Landing, the process could be reversed, using a thick cord wing to sustain the load at lower speed for an easy landing.

In effect there was a two-speed wing and a two-speed propeller, but in each case speed could be converted into weight-lifting if desired.